The Broncos ride dominant performances from their offensive and defensive lines, and flip the script on Mike McCoy's control the ball strategy to end the Chargers' Cinderella playoff run.

Philip Rivers wasn't really turned loose until after halftime, and even then couldn't get anything going until late in the 3rd quarter. His final stat line of 18 completions on 27 attempts (67%) for 217 yards (8.03 YPA) with 2 TDs and no turnovers. Rivers was under duress early in the game due to protection issues, and ultimately was sacked 4 times, although he did gain 10 yards on 3 runs. Rivers also struggled to get the Chargers in the right play before the play clock expired, resulting in some burned timeouts and a delay-of-game penalty.

That said, most of Rivers' passes were on target, and he was victimized in the 3rd quarter with some crucial drops. However, it must be said that Rivers was terrific in the 4th quarter keeping the Chargers in the game, showing nice accuracy pushing the ball down the field.

The unit was hampered badly by RB Ryan Mathews' high ankle sprain. Mathews finished with 5 carries for 26 yards (5.2 YPC), which included 1 run for 16 yards - which might have gone for much more if he were healthy. RB Danny Woodhead was ineffective in the running game, running for only 29 yards on 9 carries. Woodhead was also not really utilized in the pass game, with only 3 catches for 10 yards. He was also part of the pass protection mishap which resulted in Rivers' 1st sack by DE Jeremy Mincey. Ronnie Brown finished with 1 carry for no gain, but had 18 yards on 4 catches (5 targets).

This was almost nothing until the Keenan Allen show in the 4th quarter. Allen finished with 6 catches (9 targets) for 142 yards and 2 TD catches. Allen wasn't really targeted until well into the 3rd quarter, and finished with 1 catch against DEN CB Dominique Rodgers-Cromartie before terrorizing CB Quentin Jammer. Beyond Allen, there was nothing much of note, minus a 30 yard catch by WR Eddie Royal. Royal's other target resulted in either a terrible route, or a poor pass from Rivers to kill a 2nd quarter drive. WR Vincent Brown finished with 1 target and no receptions, and got flagged for offensive interference in the 3rd quarter.

The TEs fared even worse. TE Ladarius Green finished with only 2 catches for 7 yards, and missed a critical 3rd down pass reception which could have extended a drive. TE Antonio Gates finished with only 2 catches for 10 yards, with his other two targets resulting in a drop and an intentional throw away. When you throw in reserve TE Jake Byrne, all three TEs struggled badly with run blocking, failing to set the edge or get any real push whatsoever.

LT King Dunlap had his worst game since returning from injury, going against DE Robert Ayers. Dunlap was consistently high in run blocking, and got knocked backwards into Rivers on more than 1 occasion. LG Chad Rinehart was fairly solid in pass protection, although getting pushed back into Rivers a couple of times, and was functional at best in run blocking. C Nick Hardwick probably had the best game overall, and did a nice job giving Rivers room to step up.

On the right side, the line was a disaster. RG Johnnie Troutman was playing out of position and it showed, as he was consistently pushed backward into the pocket, allowing a sack to DL Malik Jackson. Somewhat surprisingly, Troutman also failed to get any traction in the running game. His athleticism wasn't even on display on the occasions when he pulled on runs to the left. RT D.J. Fluker had consistent problems with the speed of OLB Shaun Phillips, getting beat for a sack on an inside move. Phillips other sack was the result of good downfield coverage.

Aside form a couple of isolated plays from DE Corey Liuget, the defensive line was non-existent in this game. Liuget made a nice tackle for loss which helped force a missed FG attempt from DEN PK Matt Prater, but for large portions of the game, Liuget was either pushed around or neutralized by LT Chris Clark. In the middle, DT Cam Thomas had limited opportunities and did nothing much with them, finishing with only 1 tackle and a hit on QB Peyton Manning - on the TD throw to Wes Welker. DE Kendall Reyes was mostly dominated by RG Louis Vasquez. Reserve DT Lawrence Guy also failed to make an impact on the game in any way. Guy and Thomas accounted for 2 of the Chargers' 5 offsides penalties - biting on Manning's snap count histrionics.

OLB Jarret Johnson did a solid job setting the edge on running plays, finishing with 6 tackles, but providing nothing in terms of the pass rush. OLB Melvin Ingram failed to make a play of consequence following his solid effort against CIN, finishing with 3 tackles. OLB Thomas Keiser was completely invisible. These 3 accounted for the other 3 offsides penalties. OLB Reggie Walker failed to make any impact on the game.

ILB Donald Butler also struggled to make an impact, although he had a nice INT off a tipped pass in the end zone and showed good awareness to keep his feet inbounds. ILB Manti Te'o finished with 3 tackles, had one play where he shot the gap and missed the tackle, and struggled to shed blocks before his unfortunate concussion. ILB Bront Bird was pressed into duty as his replacement, and finished with 3 tackles and a pass defensed, although he looked lost in coverage.

As a group, the safeties probably had the best all-around game on the defense. SS Jahleel Addae had the best overall game on the defense, finishing with 6 tackles. 1 tackle for loss and a forced fumble against TE Julius Thomas. S/Nickle CB Marcus Gilchrist also did a solid job, finishing with 7 tackles. The worst Safety play unfortunately came from FS Eric Weddle, who finished with 3 tackles, and missed several open field plays which could have prevented 1st downs and gotten DEN off the field.

At CB, Richard Marshall was once again lucky enough to recover a fumble, and rebounded after a few early passes allowed with a solid tackling effort, finishing with 4 total. On the other side, CB Shareece Wright had a solid game which included 4 tackles and 3 passes defensed. One was a nice play in the end zone against WR Demariyus Thomas - although an early one of these should have been an INT which would have stopped a DEN TD drive.

PK Nick Novak converted a FG of 30 yards and missed a 53 yard attempt when his plant foot slid on the turf. Novak also struggled on kickoffs, failing to produce even 1 touchback on 3 kickoffs in the thin mountain air. On the other hand, Novak did come up with a strong onside kick in the 4th quarter which was recovered by Richard Marshall. KRs Danny Woodhead and Ronnie Brown failed to return any of PK Matt Prater's 5 kickoffs - all resulting in touchbacks.

P Mike Scifres had an uneven game. His 4 punts resulted in only a 30.3 yard net average, with 1 touchback, 1 downed inside the 20, and 1 line drive nearly returned for a TD by PR Eric Decker, who was tripped up by the DEN turf. Kick coverage units struggled to contain KR Trindon Holliday, who almost returned a kickoff for a TD and was tackled by Novak on another return.

Mike McCoy's issue this week wasn't game management. The issue to me was offensive game preparation. I tweeted before the game that I wasn't very concerned about Troutman replacing Clary - mostly because I assumed he'd play at LG, with Rinehart moving to RG. I don't understand why Troutman was inserted into the lineup at RG, a position he hadn't played much (if at all) during his college or pro career. It added a lot of uncertainty into a situation where the margin for error was slim to begin with. In my opinion (for what it's worth), this was a major gaffe by McCoy, former Offensive Coordinator Ken Whisenhunt, and Offensive Line coach Joe D'Alessandris.

Secondly for McCoy and Whisenhunt, once it was evident Mathews would be a limited contributor, I think the game plan should have been shifted more into Rivers' hands. To be clear, I'm not endorsing a shootout. I agree with the ball-control approach against the Broncos. But why not a) use Mathews as a decoy, b) or give Rivers a lot of quick throws like WR smoke routes and screens - especially with DEN playing off coverage - to substitute for running plays?

Now, to the defense, where Defensive Coordinator John Pagano went with one of the most vanilla game plans I've ever seen. For a majority of the game, Pagano made Manning's life simple. Against 2 down linemen- run the ball and throw WR screens. Against 3 down linemen - pass downfield. No disguises, limited blitzing, occasional stunting and twisting. Honestly, against a QB of Manning's caliber, reading the Chargers defense must have seemed as challenging as "See Spot Run." As for 3rd and 17, why on earth are you giving Manning a 3 deep zone, which invites a corner route for the 1st down? No blitz to force a quick pass? No man-under to force a perfect throw? 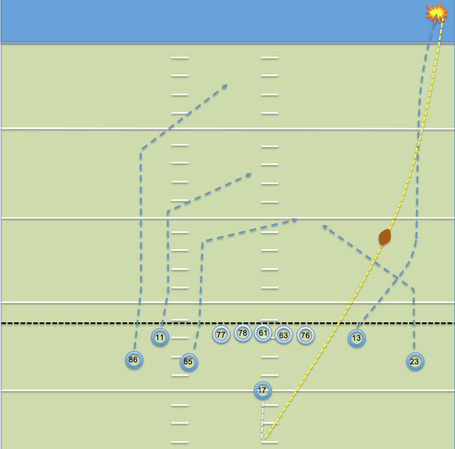 Seeing what GM Tom Telesco has in mind for an encore to a solid 1st season, and how Mike McCoy handles his first go round of changes to the coaching staff. Hopefully, an offseason without any major injuries and / or suspensions.