The last time these two teams met, one (surprising) Charger defensive player made several key plays: Marcus Gilchrist. On many occasions, the Chargers rushed Gilchrist off-the-edge, putting him in prime position to make or clean up plays. On at least three separate plays, Gilchrist executed his assignment perfectly.

Gilchrist (in yellow) is matched up against Virgil Green (in blue), the Broncos version of blocking tight end John Phillips, on the weak side, single-back formation. As they did on more than half his snaps, the Broncos ran the football. 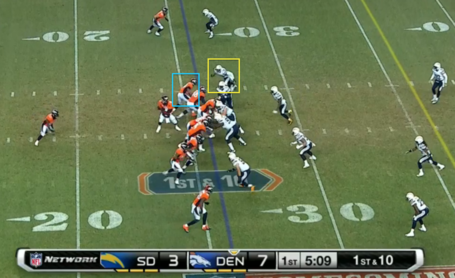 Gilchrist rushes off the corner, getting around Green with ease, although a large hole is opened up in the process. Luckily, the run was to the strong side, away from the hole created by Gilchrist rushing outside. More fortunately, Sean Lissemore has already blown up the play in the backfield, forcing Moreno to cut inside: 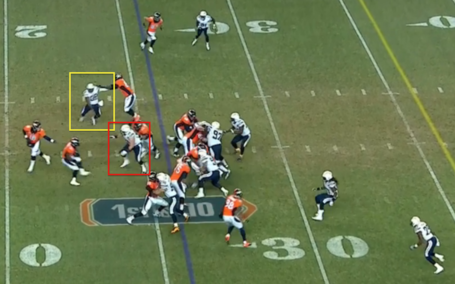 Moreno spins off Lissemore, with help from his lineman from behind, and attempts to pick up yards over the middle. From here, it's academic for Gilchrist and is entirely reflective of his effort on the play. Having gotten around Green, Gilchrist leaves his feet to tie up Moreno below the knees, holding him to a one yard gain. 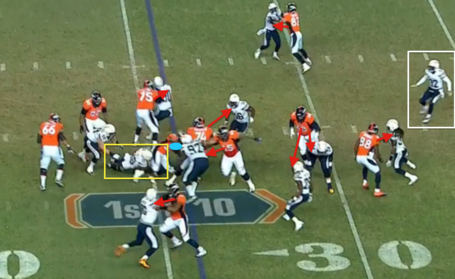 If Gilchrist doesn't make this play, it has the potential to go for many more yards. Follow the blocks (marked by red arrows) above and you'll see that the only player with a clean shot at Moreno, should Gilchrist not be able to assist in bringing him down, is Eric Weddle; Weddle is nine yards away.

Gilchrist (in yellow), again lined up in the slot, is dialed up as a blitzer. The blocking assignment on the play-action dictates that Gilchrist has a one-on-one opportunity against Knowshon Moreno to reach Peyton Manning. 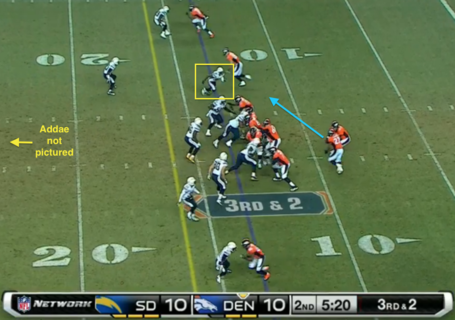 Once again, however, the play is blown up in the backfield, as Corey Liuget gets significant pressure up-the-middle. Manning is able to get away (despite Liuget's attempt to trip him), leaving the pocket.

Take a look at Gilchrist (in yellow). Moreno barely touches Gilchrist as Marcus goes around, as Gilchrist has already adjusted his angle to the football based on Liuget's ridiculous push backwards. In real time, it's hard to tell what's more to blame for Moreno's missed block: Gilchrist getting there before Moreno was expecting him to, or the fact that Liuget has forced Manning back a full four yards (and Gilchrist's angle is therefore adjusted). 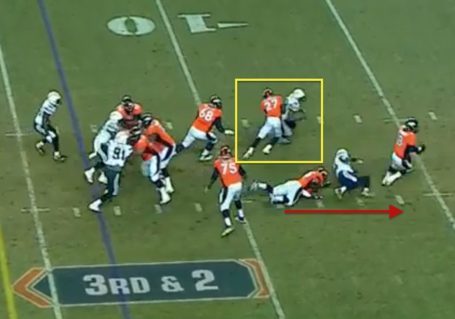 Manning, at this point, is completely unaware of Gilchrist as he rolls out, away from Liuget. By the time Manning finishes his pirouette, though, Gilchrist is noticed. Rather than attempt a rushed pass, Manning goes down for the sack.

Once again, Gilchrist shows a good in-play adjustment and cleans up after another Charger.

Gilchrist knocks down the pass

Again, Gilchrist lines up in the slot. Manning scans the field and sees that Gilchrist has actually left his assignment just prior to the snap. Manning snaps the football anyway, ostensibly believing that having Gilchrist blitzing means he'll be unable to cover the slot screen. 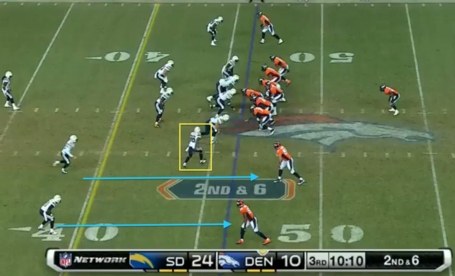 Take a look at how far away Eric Weddle is at the snap: a full ten yards. However, he's already in motion towards Decker, meaning that regardless of the outcome of Gilchrist's blitz, the fact Gilchrist is blitzing would be minimized by Weddle's quick approach to the football. I think Manning may have overlooked this fact, as a one-on-one square-off between Eric Weddle and Eric Decker can't be considered a positive outcome. A rare gaffe?

Onto the next snapshot:

Manning throws to Decker, who took a step back at the snap. Weddle has already closed within six yards and the ball is just out of Manning's hand. As discussed above: the play probably isn't going to a great play anyway.

However, Gilchrist guarantees it by again adjusting to the play and taking a better angle. Here, that angle means stepping in front of Manning's pass rather than rushing directly at Manning, which would have had Gilchrist closer to the 46 (instead of the 47).

This incompletion brought up a 3rd and 6 which wasn't completed, leading to a Broncos punt.

Not all of these plays were game-changers, but all of them helped shape the outcome. If the Chargers can once again get contributions from one of their ancillary defensive players, as Marcus Gilchrist is, it'll go a long way to determining the outcome of this rubber match.