How the San Diego Chargers Have Changed since Week 13

The Chargers lost to the Bengals 17-10 in week 13. Here are areas that could decide whether or not the Chargers can flip the script in the wild card round.

Share All sharing options for: How the San Diego Chargers Have Changed since Week 13

King Dunlap Back at Left Tackle

The last game against Cincinnati Bengals was one of the games that King Dunlap missed due to injury. That forced D.J. Fluker to start at left tackle, where he struggled. DE Michael Johnson collected 6 QB hurries, most of which came against Fluker, who allowed 7 total. Fellow contributor Kyle Posey gave a good breakdown of this match-up plus the rest of the offensive line in greater depth.

Dunlap returning will not only be a big upgrade at left tackle, but it will also allow Fluker to slide back to right tackle where he is an upgrade over Jeromey Clary. The Bengals' defensive line is talented and deep, so the Chargers should benefit from being at full strength across the line.

Melvin Ingram was still recovering from a torn ACL when these two teams met last month. It's safe to say Ingram hasn't been the player we all hoped he would be pre-injury, but the fact that he managed to come back after tearing his ACL in May is pretty spectacular. He played on 14 snaps in his first game back, but his workload has been steadily increasing up to 49 vs. Kansas City.

Ingram failed to record a QB disruption in each of his first few games back, but has six in the last two games including a forced fumble. Where he has excelled is against the run. He may not have all the explosion back required to rush the passer off the edge, but he is still strong at the point of attack and sets the edge. This is what can happen when a tight end is assigned to block Ingram: 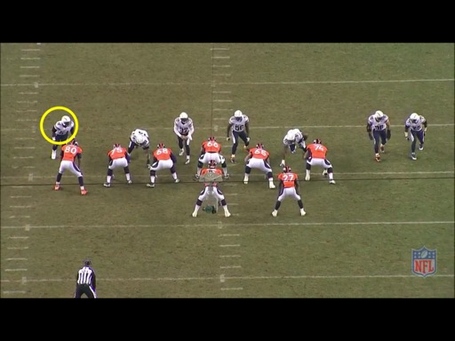 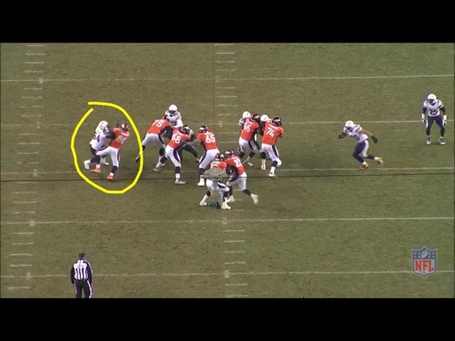 He overpowers him, sets the edge and keeps Knowshon Moreno inside the tackles 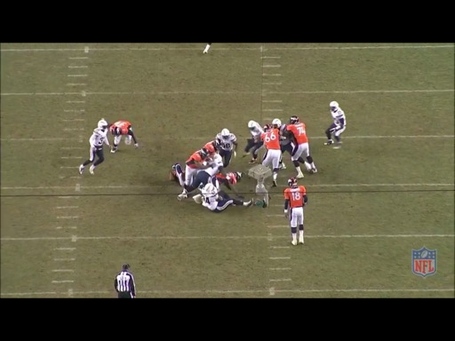 Ingram finishes the play and gets in on an assisted tackle.

If he can keep this up, it will be a huge boost for San Diego. Bengals' rookie running back Giovani Bernard is averaging 5.8 yards per carry on rushes outside the tackles and only 3.6 YPC on carries between or behind the tackles(according to Pro Football Focus). Jarret Johnson also missed the week 13 match-up, so there is no doubt that the Chargers will be much better off the edge with Ingram and Johnson both playing.

2013 has been very disappointing for the Chargers young defensive line. However, the last quarter has been a little more kind to them. Week 13 was Kendall Reyes' lowest graded performance on PFF (-3.7) in a season where he has been consistently non-existent. Liuget also had a poor game at -1.2 with only one QB disruption. Since that game, the defensive end duo has managed a +8.4 PFF grade, thanks largely to 2 sacks and 13 total pressures from Liuget as well as 2 sacks an 14 total pressures from Reyes.

Week 13 was also the last game for Cam Thomas as a starter, sparking a quick turn around. Thomas has played extremely well, especially against the run to the tune of a +5.9 run defense PFF grade in only 84 snaps since the last game against Cincinnati. The defensive line getting pressure on the mistake-prone Andy Dalton will be key for the defense to get the ball in Philip Rivers hands more often.

For the first time in Ryan Mathew's career, he played in all 16 games in 2013. He ran the ball 14 times in week 13 vs. the Bengals for 60 yards. Up until that game, Mathews averaged just under 15 carries per game. In the games since then? Over 26 carries per game, averaging about 118 yards per game. The fact that Mathews is in a walking boot after every game suggests that he probably could not handle this kind of workload over the course of a full season, but since losing and scoring only 10 points to the Bengals the Chargers offense went through an overhaul.

Because of a more prominent ground game, Philip Rivers' job got a lot easier. El Capitan attempted 37 passes against the Bengals, just above his average of 36.2 attempts per game to that point. He also averaged about 302 passing yards per game over the first three quarters of the season. In the for games (all wins) since week 13, River's attempts per game is down to about 27.5 per game, and his yards per game dropped all the way down to just over 211.

Overall, the more I dig into the the first 12 games of the season, the more I see a different team emerging. They are 4-0 since losing to Cincinnati, thanks to some adjustments by the coaching staff. They are running the ball better, controlling the time of possession, and putting the defense in a better position to succeed. They are limiting what Philip Rivers has to do, but he is still capable of winning a shootout. Mike McCoy has taken (and deserves) a lot of criticism so far, but he has done a nice job of taking a 5-7 team and making the right adjustments to lift them through the end of the season and into the postseason. The Bengals may have defeated the Chargers a month ago, but they will be getting a different team come Sunday.