Every Charger fan wants the team and their first round pick Joey Bosa to finally come to an agreement, so he can finally report to camp and help the team on the field. Some fans blame Bosa and want him to sign and report. Probably more fans blame the team, mostly, it seems, because of the complete ineptness that was last season, and since the Chargers performed so poorly last season, it stands to reason, for some fans, that this must be symptomatic of the organization as a whole. This seems to be a little reactionary to me, since there is not really one side to blame entirely. In fact, there seems to be one entity that escapes most fan's purview and one thing that gets overlooked is the agents: Creative Artists Agency*.

Todd France, who works at CAA and is Joey Bosa'a agent may be the major culprit for this standstill between Bosa and the Chargers. Yes, the Chargers want to defer part of his signing bonus, how much is a rumor at this point and can be open to debate, depending on which of the various sources you believe, and there is also the offset language to consider, but, all in all, the two sides aren't too far apart, theoretically. The problem seems to reside with France and CAA, and the reason it twofold: they are not solely looking out for Bosa'a interest, and they have a tactic of playing the waiting game—hoping that the team will cave due to public pressure and a time crunch.

Agent Ron Slavin, on the Kevin Acee show on Mighty 1090, asserted that CAA isn't necessarily solely looking out for Joey Bosa's interest—they, too, have a vested interest. According to Slavin, if an agent/agency, in this case CAA, promises a top draft pick the total signing bonus up front and no offset language and cannot deliver on either and/or both, other agents and agencies are going to use that failure against CAA. How so? When trying to acquire the top prospects for next year's draft, competing agents and agencies are going to use any prospective failures that CAA and France may have as leverage against them and as an example of why to sign with them as opposed to CAA. In essence, if France and CAA doesn't deliver on all of their promises to Bosa, it will affect them in the upcoming years when trying to land new clients, so it is in CAA's best interest to be dogmatic in negotiations because they have potential future clients to lose if they are not.

The other main factor that is holding up the negotiations is the fact that CAA is known for playing the waiting game while negotiating contracts. Andrew Brandt, a former agent and former GM of the Packers, mentioned this in an interview on the Ross Tucker Football Podcast. When speaking of the Jets and their signing of quarterback Ryan Fitzpatrick, Brandt stated that the Jets gave in on what CAA and Fitzpatrick wanted, which was a one-year deal with no option for a second, which left the Jets with no leverage come next year if Fitzpatrick's services are wanted again. In essence, CAA waited the Jets out and the Jets caved. Brandt mentioned that this is a tactic that CAA is well known for. Why is this important and/or relevant? This is key because, in the future, other agents will know that they can just wait out the Jets and get exactly what they want. The same is true for the Chargers if they acquiesce easily to CAA's contractual demands. This is why the Chargers keep using the word "precedent" when referring to these negotiations. We know that Joey Bosa's situation is different because he is a top 3 draft pick, but agents in the future aren't going to care about that distinction.

In another interview on the Ross Tucker Football Podcast, Brandt did say that there was an obvious compromise in regard to the signing bonus and how much is deferred. The problem is, according to Michael Gehlkin, is that the Bosa camp is insisting of 100% of the signing bonus the moment that Bosa signs. So it doesn't really matter if the Chargers are willing to move from their position in the negation for the signing bonus, because the Bosa camp is steadfast in their stance. Unless the Chargers want to look like Willie and Marcus negotiating with the store dick in Bad Santa, there really isn't a point in trying to negotiate with someone who is unwilling to move at all. 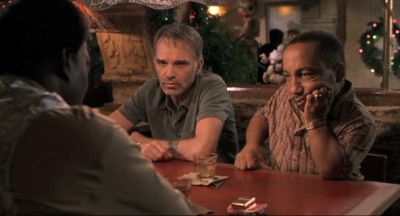 As it stands now, it looks like the Chargers are stuck in a Mexican standoff with Joey Bosa and CAA. And while it may be easy to put the onus on the Chargers and blame them for the negotiations stalling because of the train-wreck that was last season, there is more at hand than most fans may realize. While it is currently bad, hopefully, it'll end up being good before it gets ugly.

*On a side note, last Halloween, I took a tour of the CAA offices in Century City. They decorate each floor with a different theme. I didn't realize at the time that which agency it was and how influential they are in the sports and entertainment world.

Who is to blame for the impasse in the negotiations with the Chargers and Joey Bosa?