Have the Arizona Cardinals gotten better or worse since last year?

The Cardinals have improved both their offense and defense in recent years. What personnel will be key for Arizona to be both a contender and a tough opponent for the San Diego Chargers?

Share All sharing options for: Have the Arizona Cardinals gotten better or worse since last year?

Kevin Grauel and John Crean/Richard Wade have done very nice summaries of things to look for against the Cardinals, but I thought I would take a quick look at the trends in their offensive and defensive performance to look for key changes and consistency from the prior year in order to highlight areas to focus on in the game. I need the data because, without it, I can only name a few players on their team and have a "solid D, suspect offense with good WR" depth of understanding of their team.

In terms on offense, the team was solid in 2009, only to falter in 2010-12.  They brought in Arians and the offense improved strongly.

The left axis on the chart above is DVOA and the right axis is PFF data, normalized via my methods I have used in prior articles.  The PFF derived data is basically how many standard deviations a player, unit or team is from the corresponding average.  Anyway, you see a big improvement from 2012 to 2013.

The above data (and in the similar chart for the defense) is the normalized PFF data.  That improvement is Carson Palmer being a competent quarterback, following the shenanigans of Whisenhunt with Kolb, Hoyer, Skelton and Lindley in 2012.  So Palmer will be under center, so that improvement looks intact. So I will be watching to see if Palmer is looking like last year or showing his age (34, not that old but not football young). Pocket passers seem to age well, so will expect Palmer to be solid again.

The next thing that jumps out is the improvement in the RB position, essentially the emergence of Andre Ellington in 2013, replacing the collective ineffectiveness of Beanie Wells, LaRod Stephens-Howling (despite a kick ass name) and Anthony Sherman. Ellington is listed as Questionable with a bad foot.  A report suggest he will miss this and many more games. If he does not play, that ought to be a big break for the Chargers.

On the opposite end of the spectrum is their offensive line. Their collective ineffectiveness has been a big part of the team's recent woes. Gone is from starting at LT is Bradley Sowell replaced by Jared Veldheer from Oakland. Veldheer has been very solid in Oakland (it seemed like a classic Oakland fiasco when he was allowed to walk), so one would expect this to be a big upgrade. This will be a key area to focus on. At RT, gone is Eric Winston, replaced by their 2012 4th round pick Bobby Massie, who appears to have played reasonably well in limited snap counts in 2013. So how both tackles hold up will be an area to watch.

Their TE situation is not great either, so they have brought in John Carlson from Minnesota. Not a big name but seems to be a solid player. I cannot recall a single play involving him in either Minnesota or Seattle (where he played previously). Hopefully he will remain unmemorable on Monday. OK, some memorable drops or blown blocks would be fine.

But the Cardinals are known for their defense that has been continuing to improve, as the chart below illustrates (same metrics as offense chart above).

Looking at the position scores for Arizona shows improvement across many groups, lead by their CB's and DE's. 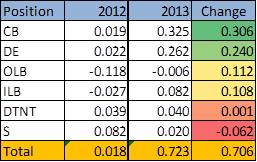 The CB position is buoyed by the continued solid play of Patrick Peterson and the solid play of Tyrann Mathieu, their 3rd round pick in 2013. Mathieu is listed as also listed as questionable, so seeing whether he plays and how the unit plays overall against the SD receiving group will an area to pay attention to (as previously outlined in the other articles).

Calais Campbell is their DE with dominant metrics and he is will be out there, too bad for us. Darnell Dockett is probably the best known and is out with injury, but his metrics were not very good last year, seemingly in agreement with the assessment of Jess Root of the Revenge of the Birds in the John and Richard's article. They seem to like his replacement just fine, so expect solid play from their DL.

Both ILB and OLB improved in 2013. At OLB, that improvement seems to be mostly from John Abraham, their pick up from Atlanta in 2013. He will also be there on Monday. Probably more of the same, though at 36 he ought to be slowing down. Hopefully that starts Monday.

At ILB they could be a mess. Their best player was Karlos Dansby, who has left for Cleveland. Daryl Washington was the other ILB with solid play, but he is suspended for the year.  Replacing them are Larry Foote, formerly of Pittsburgh but who barely played last year and did not play particularly well in 2012. Next to him will be Kevin Minter, their 2nd round pick from 2013. He played very little last year and his preseason play has been limited due to injury, so seeing how he responds and plays could be key, especially in our running attack.

So, in quick summary:

I like their chances this season despite SF and SEA but we may get them in a weakened state.  Let's watch and hope.