Yesterday, we took a look at Arizona's offensive line versus San Diego's Front 7. Today we'll take a look at potential match-ups between San Diego's offensive line and the Cardinals Front 7. Here's how important maximizing your players talent is as a coach. In 2012, Arizona was dead last in adjusted line yards. Last year, they brought in an aggressive/attacking/1-gaping defense and improved to #1 in adjusted line yards. Surely, it helps to have talented men up front, but it's so much easier when players can just play, and don't have to think. It all starts with the big boys up front.

It starts in the middle with big #92, Dan Williams. Williams does a good job of resetting the line of scrimmage. Chargers center Nick Hardwick is a good one, but he'll have his hands full. I'd give Hardwick the slight edge because he's such a sound player, and rarely makes mistakes. Hardwick had one blown block last year. Left guard Chad Rinehart is a lot like Williams; when he's healthy, he's pretty good. Rinehart isn't going to wow you with awesome power or eye-popping athleticism, but he just doesn't make mistakes. Against his counterpart on Monday night, he'll need to bring his A+ game.

Calais Campbell is a top-5 defensive player in the NFL. Period. You don't appreciate his entire skill set until you actually sit down and watch him. He's a 1-man wrecking ball. You want to double team him? He'll hold up at the point of attack and still probably make the tackle. Leave him 1-on-1 in the passing game and it's RIP more often than not for whoever is isolated against him. Here's my biggest worry: San Diego loves to pull their guards. The thought of Johnnie Troutman pulling Campbell's way is a recipe for disaster. I'm fascinated as to how Frank Reich will game plan around Campbell and how he plans to stop him.

Another bullet the Chargers dodged is Darnell Dockett being out for the season. Dockett is another disruptive force up front for the Cardinals and looks to be replaced by Frostee Rucker. The veteran hasn't played more than 50% of his teams snaps since 2007. Rucker is undersized for your traditional 5-technique, and given Campbell is on the other side, expect a lot of runs to the right.

Many Charger fans finally got their wish as incumbent starter Jeromey Clary is no longer starting at right guard as he might miss the entire season. San Diego drafted Chris Watt in the 3rd round, and I think it's a matter of games before he unseats Troutman as the starter. Last year, I charted him for 27 blocks. This preseason hasn't exactly been a ringing endorsement for him, either. I thought it was telling how quickly Watt jumped Troutman as the first team guard, until he suffered an injury.

Troutman will have to have his head on a swivel, and be on the lookout for blitzing linebackers and slanting lineman. He struggled to pick up stunts a year ago and a Todd Bowles defense loves to give you exotic looks, like the one below. 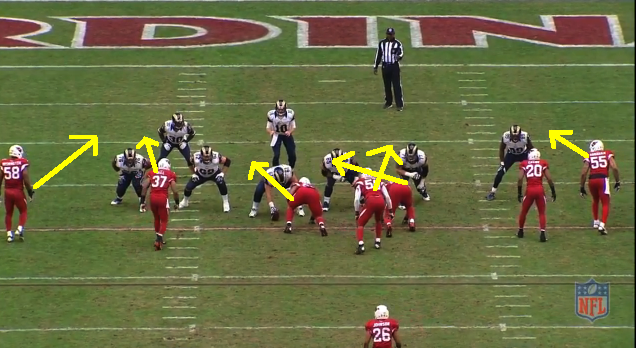 This was a 6-man rush that resulted in a sack-fumble from John Abraham, #55. The difference between a Bowles blitz and a John Pagano blitz is Bowles schemes his blitz to give his best rusher a 1-on-1 match-up. Whether it's Ryan Mathews, Danny Woodhead, or Donald Brown, one of the running backs will be crucial in picking up a free rusher. Without question, Troutman worries me the most. Another blitz the Cardinals seem to favor is sugaring the A-gap and bringing an inside linebacker. It will still be a challenge, but not as much as it would have been.

Replacing What's up the middle

Arizona will be without both inside linebackers from a year ago. One was lost to suspension, and the other left in free agency. This is great news for Chargers fans; not so much for Cardinals fans. I can't imagine Arizona being as effective blitzing with thumper Kevin Minter and a 47-year old Larry Foote. If San Diego were to ever run more 2-tight-end sets, this would be the game to do so. Take advantage of these 2 on stretch zone plays, or by throwing it to the tight ends.

Speaking of tight ends, Arizona struggled to cover them last year, and I don't see how losing 2 top cover linebackers will improve that. Half of the touchdowns the Cardinals gave up a year ago came to tight ends. In their 6 losses, they gave up 18 total touchdowns. 12 of those came from tight ends. Quarterbacks completed 68% of their passes for 12 touchdowns and only 1 interception, at just over 10 yards a reception. You see where I'm going with this?

Antonio Gates is one of the greatest receiving tight ends to play the position. No one will argue that he's past his prime, but he's still a damn good route runner and still a reliable, even go-to, target for Philip Rivers. The hyperbole for Ladarius Green was unbearable this offseason. For a guy who had 17 catches, you'd think people were referencing Gates in his heyday. However, Green's athleticism is incredible, and best of all, he can make contested catches and finish plays. It's rare to see a tight end this young do the little things that Green does, like catch the ball at it's highest point. I understand Arizona drafted Deone Bucannon to with the coverage issues up the middle, but this is no easy pair to face, especially for a rookie. If the honey badger plays, that will change this, but San Diego should take advantage here.

Arizona has the ageless wonder, John Abraham, rushing the passer off the edge. He was great a year ago for them. His season is likely what Dwight Freeney's would've been if he had stayed healthy: good against the run, very disruptive as a pass rusher. Abraham will be matched up against King Dunlap, who was terrific in the run game last year. In fact, Dunlap had zero blown blocks in the running game last year. It was a surprise to see how well he sealed off linebackers at the 2nd level. San Diego was 1st in adjusted line yards when they ran it around the left end, and 4th when they ran right behind left tackle.

In the passing game, he'll have his hands full. Abraham still has the speed to run right around you and Dunlap isn't the fleetest of foot. I wouldn't be surprised if they moved Abraham to the other side to go against second year tackle D.J. Fluker. Fluker struggled mightily at times in pass protection. He had a tendency to catch blockers, and by that time they had enough momentum to walk him back into the quarterback and disrupt the play. Rivers does a good job of stepping up in the pocket, but Fluker still will let rushers beat him around the edge.

The other outside linebacker slated to start is Matt Shaughnessy. He's very Jarret Johnson-esque. Good run defender who understands his gap responsibility, but a limited pass rusher. I don't believe he would give Fluker any problems if D.J. is the aggressor. I also think Fluker can win this match-up in the running game as well as get to the 2nd level and dominate. Because of that....

Keys in this Match-up

Another fascinating match-up. If the Chargers can attack the Cardinals down the middle of the field, whether dink and dunk or taking shots, I believe they can be successful. Game-planning around Campbell is critical, as is being prepared for the blitzes Arizona is going to throw at you. Dunlap will have to hold his own, but with quick throws that should slow down the pass rush. I think the difference is being able to run the ball. Run it right and run it often and I believe San Diego will be fine here.