What to Watch Out for Today: Jacksonville Jaguars vs. San Diego Chargers

With Blake Bortles getting his first NFL start, the Jaguars are going to need to do some things to help him out, otherwise this one could get ugly.

Share All sharing options for: What to Watch Out for Today: Jacksonville Jaguars vs. San Diego Chargers

Remember how we highlighted the experience disparity between quarterbacks last week. Well, it's even larger today with the Jaguars finally deciding to stop pretending they were actually going to roll with Chad Henne all year.

It's a doozy of a beginning for Blake Bortles, the former University of Central Florida star. Not only will he be in enemy territory far away from home against a defense that turned EJ Manuel into a raging dumpster fire last week, he'll be trying to keep up with Philip Rivers and company. Seriously, g'luck, rook.

Bortles is a strong-armed, athletic guy. He can heave it deep or throw it into a tight window while evading a couple rushers on one play, and then keep it on read-option the next. He's an intriguing and promising talent, but he's still raw. And with a shaky offensive line, young receivers and the Chargers defense smelling fresh meat, the Jaguars better be careful, especially early on, or things could snowball rather quickly for the rookie.

That's why I expect the Jaguars to get Bortles some easy completions early on to ease him in and settle down his nerves. Here's one such play: 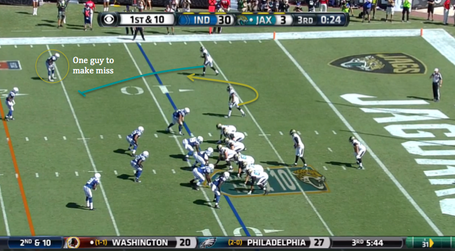 This is just a simple bubble screen against soft coverage. This one was to Cecil Shorts, but I've seen them also run it with Marqise Lee. In either case, it gets an athlete out in space one-on-one with a defender, but more importantly, it's an easy throw, one that can help Bortles get into a rhythm early on.

It'll also help him avoid obvious passing situations, where the Chargers defense will most certainly be pinning their ears back and trying to tee off on him. Another way the Jaguars can accomplish this is by leaning on their running game.

With Toby Gerhart in the backfield, Jacksonville is looking to run downhill and wear defenses down for their passing game. Here's a little wrinkle to throw at defenses when they start keying on Gerhart: 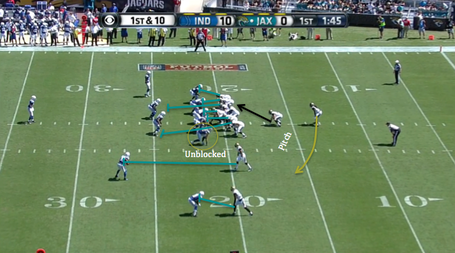 Here, Gerhart is in as the fullback while Denard Robinson lines up at tailback. The fake to Gerhart gets the entire front seven, but more importantly the unblocked defender, going the wrong direction, giving Robinson all the room he needs to take the pitch and outrun the defender to the corner. This play only ended up going for seven yards, but if the blocking held up on the outside, it could've gone for much more.

Nevertheless, like the bubble screen, it does the job of keeping the offense on schedule and helping Bortles stay out of obvious passing situations. In addition to these plays, you'll also probably see plenty of rollouts (which will also help to get Bortles easier throws) and a little read-option mixed in to take advantage of his athleticism.

These are ways the Jaguars can make it easier on Bortles, but no matter what they do, he's inevitably going to make mistakes and give the Chargers defense some opportunities for turnovers today. If they happen early and the Chargers convert, this one could be very, very ugly.

Welcome to the NFL, rookie.