The Chargers second touchdown of the game was set-up in large part by a nice play-action pass to TE Ladarius Green, which perfectly exploited personnel mismatches between the Bills defense and Chargers offense.

Sometimes, the success of a running game can't only be measured in the yards gained, or even the yards per carry. In the case of this particular play, Offensive Coordinator Frank Reich staying with the run sets up this play-action pass, and because of the Chargers commitment to the run, Buffalo has to honor the fake. Let's take a closer look: 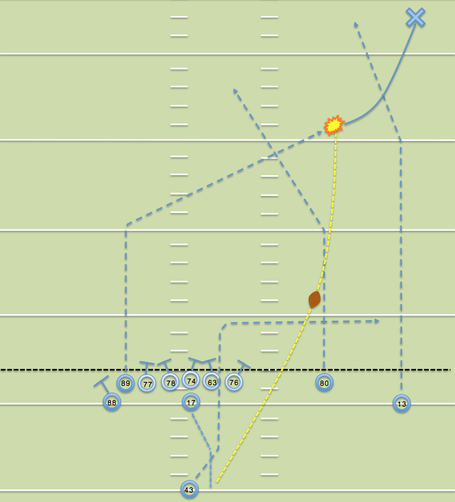 Play Diagram - Note: the routes have been compressed due to space limitations.

As I mentioned above, the Chargers commitment to the run (without having to be successful) forces the Buffalo defense to honor the run action. Unlike the play action pass we saw 2 weeks ago, this play sends more receivers into the secondary. This is a play the Chargers have been waiting all game to run, and when the Bills treat it as another 1st down run, they get the opportunity they've been waiting for.

From left to right:

Elements of the Play: 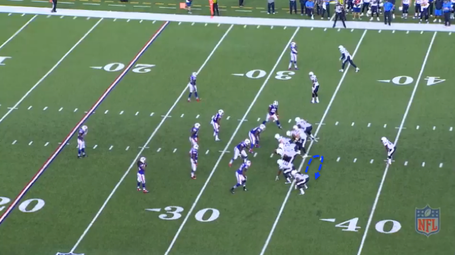 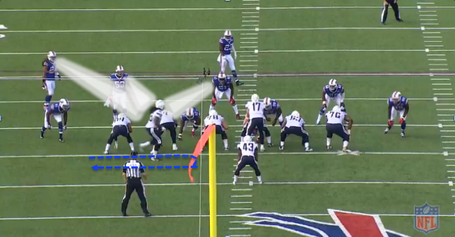 Figure 2 - As opposed to the previous instances of motion, we see Gilmore, Bradham, and Spikes watching Johnson's motion. However, no one matches his movement. 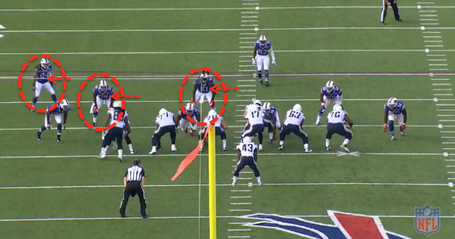 Figure 3 shows the end of Johnson's motion and the snap. The three defenders have shifted slightly right as Johnson returned to his original position. This is a strong pre-snap indicator that the Bills will be playing some form of zone coverage. 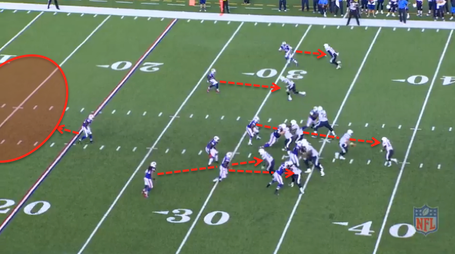 Just after the snap, it appears to me the Bills are playing Cover 1, with Aaron Williams providing help in the deep middle. Gilmore is covering Green's possible out-breaking route, Duke Williams is covering Floyd, and Graham has Allen. Bradham has Johnson, Spikes has the shallow middle, and Brown has Oliver. 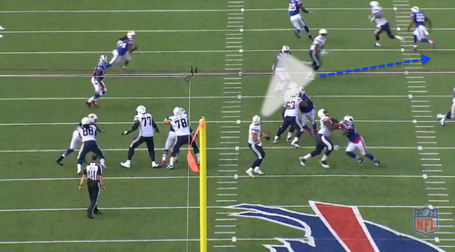 Figure 5 shows the pass protection. Johnson does a nice job against Lawson, to the point where LT King Dunlap has the freedom to help either him or LG Chad Rinehart. Rinehart does a nice job against Bryant. C Rich Ohrnberger and RG Johnnie Troutman combine to block Dareus and take him out of the play completely. The only real rush comes from Wynn going against RT D.J. Fluker, and Fluker does a solid job forcing Wynn around the outside, while also getting an (uncalled) illegal hand to the face.

QB Philip Rivers has a clean pocket and plenty of room to make the pass, and he's already eyeing Green - breaking free behind Spikes. Also, look at how badly Gilmore is trailing Green. 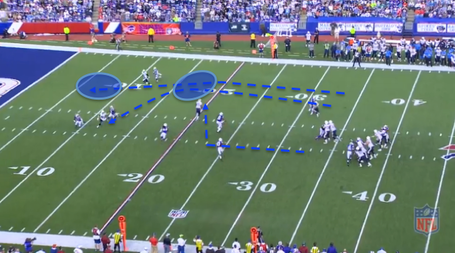 As the routes develop in Figure 6, Floyd's post takes both Safeties out of the play, and Allen's post clears out the intermediate left side of the defense. Brown takes on Oliver when Oliver breaks on his shallow out pattern. Spikes is too shallow (and slow) to defend that much field, and Gilmore has too much ground to make up.

This leaves Green running free across the middle left of the defense. All Rivers has to do is throw Green into the open area (blue circle) of the defense.

However, take a look at the top of the field. Graham commits the cardinal sin of allowing Allen to cross his face without inside help. Had Rivers desired, he could have taken a shot for the TD with Allen.

Here's the play in a GIF:

This was a terrific play call by Reich and/or Rivers, as it seems the Bills were caught in a bad personnel matchup. The Bills defensive personnel seems better geared to stop the run, which seems to be the smart call - given the Chargers' run tendencies on 1st down. The defense simply doesn't have the pass rushers and defenders in the middle to make this coverage work. This is a great example of coaching and execution allowing the Chargers to take full advantage of a mismatch.