The San Diego Chargers Offensive Makeover: From Turner to McCoy

When Mike McCoy was hired, the Chargers were a mess on offense from top to bottom. A year and a half later, the Chargers stand tall as one of the best teams in the league in both offense and in record. Here's the backstory to the change that came with Coach McCoy.

Share All sharing options for: The San Diego Chargers Offensive Makeover: From Turner to McCoy

Excluding the recent storm of injuries, hopes are as high as ever for the future of the Chargers. After the surprise playoff appearance and wild-card game victory last year, the Bolts are proving to be the up-and-coming team of the NFL. The turnaround of the team began during the 2013 offseason. The Chargers had finally purged themselves of long time general manager A.J. Smith and head coach Norv Turner. The previous pair had only kept their jobs for so long because of early success, but after years of playoff disappoints and consistent decline, the two were finally fired.

As the second youngest head coach in the NFL, the majority of pundits and fans did not expect immediate success from McCoy’s first season. The Chargers were thought to be in rebuild mode after having their first sub-.500 season since 2003 and there were whispers that Rivers was in decline. But to the surprise of many, the Chargers went 9-7 and advanced onto the divisional round of the playoffs.

What changed? How did a team that seemed to be destined for a rebuild turn around and charge into the playoffs?

The answer? Mike McCoy and his changing of the offense.

Norv was stubborn. Yes, he shifted the focus from an LT driven offense to one that featured Rivers, but the core concepts of his offensive philosophy never changed. Never mind that the roster didn’t have the personnel to run the Air Coryell offense that Turner wanted to run; Norv wanted to run the offense regardless of his team. That’s the basic reason why Norv Turner failed as the offensive coordinator/head coach of the Chargers. He refused to change.

Mike McCoy is the polar opposite of Norv. He doesn’t have a set offense that he wants to run every year, but actually molds the offense around the personnel that he possesses.

Take Denver for example. When McCoy was the offensive coordinator for the Broncos, every time the offensive roster changed, the offensive philosophy changed with it. I’ll disregard 2009 and 2010 because Josh McDaniels held the play calling responsibilities. As John Fox was hired in 2011, the play calling duties were passed onto Mike McCoy. The Broncos started off shaky with Orton at the helm, going 1-4 in the first five weeks and their offense was running on fumes. But in week 7 (week 6 was their bye), McCoy decided to start Tim Tebow in favor of Kyle Orton and install a read-option offense around Tebow and McGahee.

The Broncos then went onto win seven of their next eleven and ended up leading the league in rushing. McCoy saw that the Broncos had a great run-blocking offensive line and a power-run back in McGahee. Add in a running quarterback like Tebow and McCoy changed the direction of the Broncos offense from a short-pass-heavy offense, into a run oriented team. Now obviously running was the Broncos' strong suit with Tebow's limited passing ability, but the beauty of McCoy’s offense was McCoy's adjustments in the passing game. The first little tweak of the offense was that at least one of the receivers ran an out route. Of the small number of skills Tebow possessed in throwing the ball, the out route was his best. Tebow was quite dreadful in the short passing game, but when it came to a 10-to-15 out route, Tebow was on the money. The second tweak: they went deep. Tebow couldn’t hit a still target even if it was a foot away from it, but give him a receiver twenty yards downfield and Tebow will hit him in stride. Especially with the ability to buy time and escape a collapsing pocket, Tebow’s arm and throwing ability complimented the deep passing game.

These little changes might not be noticed by most, but McCoy knew the strengths of Tebow’s limited passing ability and shaped the offense around him.

Now many don’t credit McCoy as much as he should for the 2012 offense because of one very big reason: Peyton Manning. But no matter the quarterback, the offense is only as successful as the offensive game plan and offensive coordinator.

But I don’t want to go on a tangent on the Broncos for too long because I might end up writing an entire novel. So here's the gist of the offense. He helped install a quicker adjustment system in the no huddle to provide faster audibles. This helped pace the Broncos offense with Peyton Manning leading the helm.

When McCoy came to the Chargers during the 2013 offseason, change was expected. The beauty of the change however, is still not fully appreciated.

For a better summary of the EPS, read Grantland's Chris Brown's article on it here. 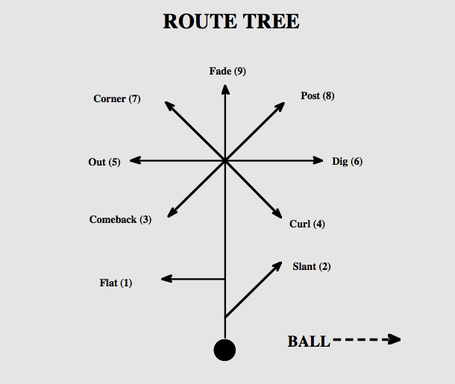 The plays would utilize a three-digit system where the three digits would represent the three receivers: the x receiver, the y receiver, and the z receiver. In the days of the two wide receivers, I-formation offense this kind of play calling was practical. Coaches could call a variety of routes for the two/three receivers and/or tight end and just add a word and letter for the route for the back. (i.e.: 645 H-in) But since the introduction of 4-5 wide receiver sets and different formation (including ones in shotgun), the play calls end up being an egregiously large combination of words and numbers that end up confusing many players.

Charlie Weis first introduced the Erhardt-Perkins offense into the modern NFL in 2000 while he was the offensive coordinator for the New England Patriots. The Erhardt-Perkins system is completely different from the Air Coryell system in the sense that it uses terms to explain the route package in the play and numbers to signal formations. To simplify everything, a single term can be called to explain the routes to every receiver in the formation set. For an example, I will make up a random play call and call the play 51 Bolt/Dolt. Let’s say that the Chargers are in a five wide-receiver set and there three receivers to the right and two to the left. This certain formation will be numbered 51 to signify that the three receivers are to the right. The side with the three wide receivers will understand their routes by the term "Dolt". Now the term "Dolt" will signify that the inside receiver is running a slant, the middle receiver is running a fly, and the outside receiver is running a hitch.

The Chargers have embraced this new offensive system and the system has fruitful for the offense. Especially with the influx of new receivers and rookie receivers, the simplification of the playbook has proved to be fruitful. Also, the efficiency of the play calling has allowed the Chargers to have success with the no-huddle offense.

McCoy saw this in his personnel and changed the philosophy of the Chargers run game from the power run to one that used the zone blocking. The change from PBS to ZBS helped boost the running game from being ranked 27th in the league in 2012 to 13th in 2013. (Yes, the Chargers are struggling to run the ball now, but with all the injuries to the offensive line and running backs, I’m not all that surprised)

The biggest factor in Rivers’ "revival" from 2012 to 2013 was the play calling. Specifically, changing the offense from a long-ball offense to a dink-and-dunk offense. Now I’ll go over the effects of the dink-and-dunk later in the article, but here’s the main reason the dink-and-dunk saved Rivers’ life: it’s quick.

What does "quick" mean exactly? When Rivers ran the offense for Norv, most of the routes run by receivers were either long bombs or  route combinations that took a while to develop. This caused Philip Rivers to take 5-7 steps on his dropbacks; increasing the time it took for routes to develop and Rivers to get sacked. This offense worked well early in the Turner years because of the phenomenal offensive line that the Chargers used to have. But as the Chargers lost the aforementioned linemen to retirement, the talent on the offensive line was never the same. But the offense never changed with the lack of talent. Since the offensive line never improved or the offense never changed, the inevitable happened to Rivers. He got sacked, a LOT, and since Rivers isn’t a mobile quarterback, this caused him to hurry throws and make rash decisions.

McCoy came into the Chargers and saw that the talent at the offensive line position was lacking. But what he also saw were quick receivers that were good at losing their man on short routes. So with the combination of the two, McCoy switched Rivers’ drops to a 1-3-5 steps (five on occasion) and the receivers ran a lot of short, quick routes. This became to be the dink-and-dunk offense that the Chargers have had success with today.

The Dink-And-Dunk and Eating the Clock

The dink-and-dunk is the best offense for the players that the Chargers currently have. The combination of speedy receivers, monster tight ends, and running backs that can catch out of the backfield makes it seems like this offense was built for a quick-pass scheme. With Rivers at the helm, the Chargers offense found new life in 2013, going from an abysmal 31st ranked offense to the 5th best offense in the league. But there is a hidden beauty in the dink-and-dunk that is crucial to the Chargers success. The dink-and-dunk offense eats the clock alive. In Chargers’ victories, the Bolts held the ball for an average of almost 38 minutes; slowly eating away every second until the game was won. The dink-and-dunk offense also allows the defense to take time off the field, the weaker unit of the Chargers. This gives less time for offenses to take apart the defense and for the defense to have more energy to spend. Philip Rivers also loves to take every second of the play clock to adjust the offense to what he sees on the defensive side of the ball. The dink-and-dunk transformed the lowly unit of 2012, to one of the league’s best in 2013.

Mike McCoy is proving that he is not only an innovative coach, but also one that can adapt to change. That ability to change not only his offense, but the team around him has given the Chargers new life and a bright future. I truly do believe that Mike McCoy is one of the great young coaches in the NFL and he continues to reinforce that belief.