What to Watch Out for Today: San Diego Chargers vs. Buffalo Bills

EJ Manuel and the Bills' passing game may not be of any concern to you at first glance, but you should look again.

Share All sharing options for: What to Watch Out for Today: San Diego Chargers vs. Buffalo Bills

As the Chargers face the Bills today, they'll be putting their veteran, Pro Bowl quarterback in Philip Rivers against the Bills' inexperienced, unproven quarterback in EJ Manuel. In fact, the disparity between the two appears even larger when you consider that Rivers has thrown just shy of 4,200 passes in the NFL while Manuel has only thrown 354. That's a difference of 3,846. THREE-THOUSAND-EIGHT-HUNDRED-FORTY-SIX!

It's safe to say that Rivers has forgotten more about NFL defenses than Manuel has even seen up to this point. This lack of experience may be why the Bills haven't been willing to put much on Manuel's shoulders as of yet. Through the first two games of this season, he has only thrown 48 passes, which have been mostly of the shorter variety.

Which may lead you to say that EJ Manuel and the Bills' passing game isn't anything to worry about, except you'd be wrong.

Whether it's through the use of the bubble screen off the read-option or a running back or receiver slipping into the flat off of play-action, the Bills do a wonderful job of using misdirection to get Manuel easy throws to their playmakers in space.

Here is just one example of what I'm talking about: 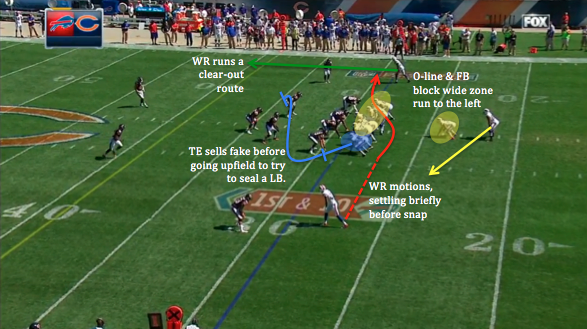 The Bills ran this play twice against the Bears, one time for a first down, the other for just shy of a first down. It's a pretty effective little wrinkle and it's not hard to see why. Both times it was ran on first down with the fake going to the wide side of the field, which is key.

On first down the defense is anticipating the run, which sets up the potential for them to bite hard on any play-action. Also, if you're going to use the wide zone run play as part of the fake, it's a little more believable if it's toward the wide side of the field.

Here, Robert Woods motions tight to the line, settling a little just prior to the snap, as if he's going to help seal a linebacker to the inside on the wide zone. Instead, he's going to work laterally down the line at the snap and shoot out into the flat on the opposite side.

The offensive line is going work laterally the other way, blocking as they would for the wide zone by either sealing their defenders to the inside or pushing them as far as they can toward the sideline. Which is all mostly irrelevant, because this is, of course, a fake, so the blocking scheme doesn't really matter here. The only important takeaway is that the offensive line (and the fullback and running back) are all going to be moving left, which is the action that gets the linebackers moving that direction, away from where the ball is destined to end up. 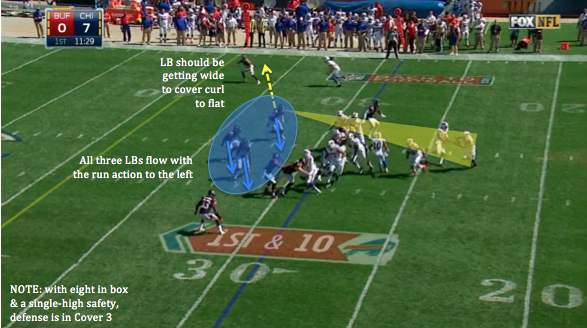 The tight end is initially going to block as he would for the wide zone before peeling back and trying to seal a linebacker to the inside for Woods. His initial action helps to sell the fake. If he peels off too early, the linebackers may diagnose the play a little sooner and not be as many steps out of position as they would be otherwise, thus giving them a better chance to cut Woods off before he can gather a head of steam.

Watkins is going to run a clear-out route to - as the name of the route suggests - clear space in behind him for Woods. That route (and this play in general) is so effective here because the defense is in Cover 3. The corner has no choice but to go with Watkins deep.

In Cover 3, it's the linebacker's job on that side to get wide and defend the curl first and then the flat. In a perfect world, that linebacker would diagnose the play quickly enough to do just this and stop it in its tracks, but (fortunately so for the Bills) we live in an imperfect world.  The linebacker along with his cohorts read run at the snap and flow with the offensive line to the wide side of the field. By the time they catch on, the damage is already done and Woods has a nice head start in the foot race towards the first down marker. 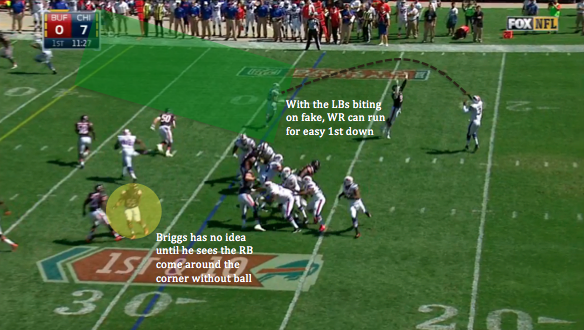 This is just one example of the misdirection plays the Bills like to use to beef up their lean passing game, and the Chargers linebackers better be on high alert for them today. They'll have to diagnose as quickly as possible and then swarm to the football. With the athletes the Bills have, one or two steps out of position could mean the difference between a touchdown and a short gain.