This past Saturday my interminable 'Chargers optimism' was reinforced as Chargers TE Ladarius Green spent time with fans and granted BFTB a little candid Q&A.

This past Saturday afternoon, Chargers fans lined up at Fox Sports Grill in downtown San Diego as Ladarius Green participated in a fan meet-and-greet hosted by Deluxe Signature Collection.

As I chatted with the Chargers third-year Tight End about the challenges facing the team's 'sophomore' offense Green said, "I think our main challenge right now is clicking at the right moment [and] not peaking too early in the season. [We need to] peak at the right time, get to the play-offs, and keep on a roll like that. As well as just having good practices and good preparation for games. It's year two in the system, our second year on this offense - of course, it's going to click a little bit better and go a little bit easier, so that helps as well."

Even with the prospect of success on the horizon, Green keeps it real when reflecting on his 'highs' and 'lows' with the team saying, "It was just satisfying to me that some of my teammates recognized me and said that I made a contribution to the team - that's a big thing coming from someone like Phillip [Rivers] or [Antonio] Gates - you know, that's a big honor. And lowest [moment], probably was when I wasn't playing - I couldn't do anything to help at all. Sitting on the sideline and not being able to help. Like my rookie year when Gates was hurt, I still couldn't go out there and play because I wasn't ready yet."

Well, I think it's safe to say that Green is ready now. And not only is he ready do all he can to help carry the Chargers to a championship, but he's ready to make a lasting impact in San Diego. The Chargers, known to foster a bond between the community and its players, continually invites rookies and seasoned players to give back to the community. Green reminisced on his rookie season and time spent in the soup kitchens at The Salvation Army saying, "It's very humbling seeing people, where people are at and how some people live, and just realizing we are just so blessed."

Only time will tell, but I think San Diego's grass is looking a little Green-er! 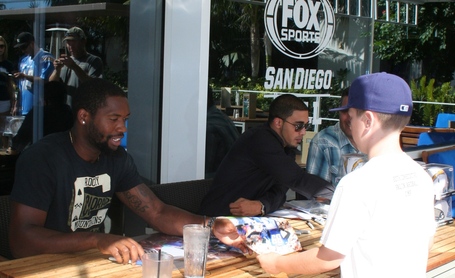