Frank Reich (with a likely assist from Mike McCoy) rebounds with a strong game against the Seahawks, and this was one of the best plays - with a dash of veteran seasoning from Philip Rivers and Antonio Gates.

Most of the things I criticized Offensive Coordinator Frank Reich for against the Cardinals - playing to his weaknesses, playing to Arizona's strengths - were largely rectified this week against the Seattle Seahawks. Whether he or Head Coach Mike McCoy is more responsible for the adjustment is not relevant in my opinion; the results were sensational. As we did last week, we'll take a closer look at one of the plays: 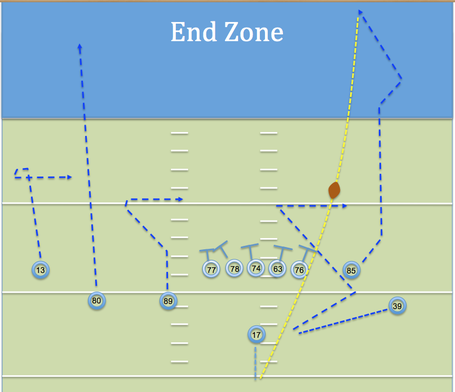 This play is designed with one main idea - to get Antonio Gates the ball in the endzone. The best way to do this against a good physical defense like Seattle is to get Gates away from the rest of the defense, and give him as much space as possible.

From left to right, WR Keenan Allen (13) is running a shallow hook, then continuing across the middle if the play extends. WR Malcom Floyd (80) runs a go route into the end zone. TE Ladarius Green (89) runs a shallow hook. Antonio Gates (85) runs something like an corner/post route. RB Danny Woodhead (39) motions into the backfield, then runs a Texas route, which he then turns out.

Seattle's defense matches up as follows:

Let's take a closer look at elements of the play. 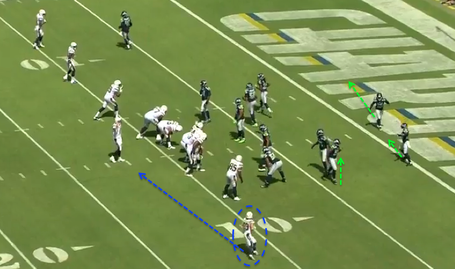 Figure 1
Figure 1 - Pre-snap. As we saw a lot last week, Rivers motions Woodhead from the right flat to the backfield next to him, with the intent of getting the defense to show it's hand. 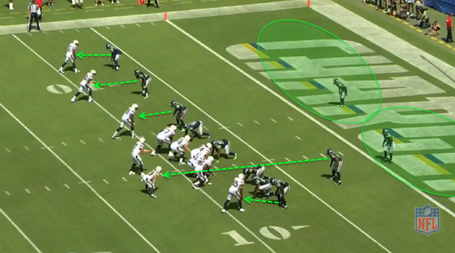 Figure 2
Figure 2 - At the snap. You'll see that Wagner has moved virtually even with Woodhead, indicating man-to-man. However, you also see that Thomas and Johnson have also moved left toward the left-center of the field, which indicates zone. Essentially, Rivers now knows he's facing a Cover 2 shell, with man-to-man underneath. This means 4 defenders to cover 3 receivers on the left, and 3 defenders to cover 2 receivers on the right, unless Seattle blitzes. 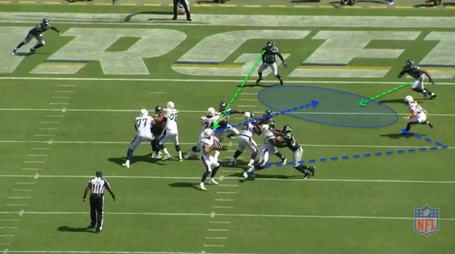 Figure 3
Figure 3 - Here's an angle behind the play. It's a four man rush. LT King Dunlap and LG Chad Rinehart double team Irvin. C Rich Ohrnberger blocks Hill one-on-one, RG Johnnie Troutman blocks Bennett one-on-one, and RT D.J. Fluker blocks Avril one-on-one. Troutman and Fluker may have struggled during this game (especially in Troutman's case), but on this play, the O-Line was money.
Rivers is holding Johnson with his eyes, by not looking directly at Woodhead or directly at Gates. Meanwhile, Woodhead's route has drawn Wagner underneath, and cleared the throwing lane for Gates. This is where the play design pays off. If Wagner sits back in zone, Woodhead is wide open underneath and only has to beat Johnson to score. If Johnson cheats too far towards Gates, Wagner has no help underneath with Woodhead. This is a textbook example of how play design and veteran quarterback play creates the desired match-up: Gates man-to-man on Chancellor. 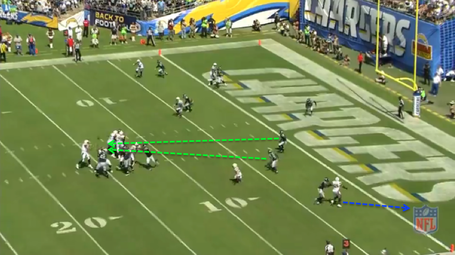 Figure 4
Figure 4 - This angle shows where Gates is located right after Rivers lets go of the ball. As mentioned above, both Johnson and Wagner are still focused underneath on Woodhead. At this point, it seems obvious, especially to Kam Chancellor, that this is a corner route into the end zone. 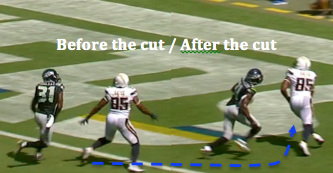 Figure 5
Figure 5 - The cherry on top of this play is that Rivers and Gates both know this isn't a corner route, rather a corner post. Because Rivers held the safety, and Woodhead's route drew the linebacker, the throwing lane is clear. Gates is looking back, not just for the ball, but also for Wagner and Johnson. All he needs to do is time his break back to the post correctly to create the space, which he does above. Meanwhile, Rivers throws so early, his pass is soft and easy to catch. 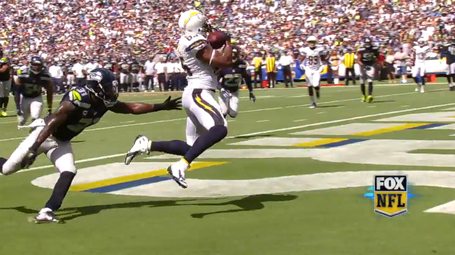 Figure 6
Figure 6 - The finish of this play shows that Gates, while no longer the deep threat he was a few years ago, still has the short area quickness to remain a force in the redzone. This was a Hall of Fame play by a Hall of Fame player.
Let's take a look at the play in the GIF below:

I love everything about this play. This play does a great job of moving Seattle's most dangerous secondary players (Thomas, Sherman) away from the focus of the play. The play does a great job of stressing Seattle's weaker coverage players (Johnson, Chancellor, and Wagner) and putting them against players (Gates, Woodhead) who have the athleticism and experience to exploit them.
Best of all, it showcases the intuitive feel of Rivers and Gates - great players who have practiced and played together for years. Seattle is a great young team, and an exceptional defense, but in this case, it was no match for experience and execution.