Is it time for Chris Watt? Can the San Diego Chargers Offense survive without Ryan Mathews?

Kyle Posey provides some of his musing on the San Diego Chargers offense. Is it time for Chris Watt to replace Johnnie Troutman? Can the offense still produce without Ryan Mathews?

Share All sharing options for: Is it time for Chris Watt? Can the San Diego Chargers Offense survive without Ryan Mathews?

What Philip Rivers did Sunday versus the Seahawks was incredible. Yes, his numbers were very good. From a football standpoint, his ability to maneuver in the pocket and avoid the rush while simultaneously keeping his eyes downfield was fantastic. He put on a clinic in that regard.

Considering he’s "only" been hit 5 times in 2 weeks tells you all you need to know about Rivers’ pocket presence. It’s still not fair to ask a quarterback to work miracles every time he drops back. The scheme can only hide the offensive line so much, at some point, they need to perform.

What I qualify as a "blown block" is when the defender is able to cross the offensive line's face. Where it’s clear that the offensive lineman is beat, that’s a blown block. Through two games, the line has combined for 35 blown blocks. This has just been masked by great quarterbacking play and running backs being able to avoid defenders in the backfield.

Is it time for Chris Watt?

Before the draft, I wrote in depth about Troutman’s "rookie" season. I saw significant issues and I said I don’t view him as much more than a swing guard moving forward.

After just one year, that was probably a little harsh.

My biggest issues where his balance and his inability to play with his "head on a swivel." I also mentioned you can’t replace Jeromey Clary with someone who shares similar issues. Troutman is also a liability when it comes to picking up "stunts", and that hasn’t improved through the preseason and 2 games.

This happened on Sunday:

When he’s uncovered he will do the right thing by helping out either Fluker/Ohrnberger. The issue is recognizing the stunting lineman coming back his way. As far as his balance, there is a lot of lunging, and a lot of chasing the defender after he whiffs.

I wonder just how patient the coaching staff is going to be with Troutman given that his struggles are exactly the same as a year ago. It was reported that Watt beat out Troutman within 5 practices, then got hurt, and never got his spot back. In the preseason Watt looked very aware, and just seemed like a better option.

Watt’s ability to stay on his feet and pick up oncoming defenders stood out. Small sample size, but when things are this clear, a switch needs to be made. I firmly believe Watt would help both Ohrnberger and Fluker as well, because he plays with his head on a swivel. Add in his ability to execute in the 2nd level and I don’t see how much longer he stays on the bench.

This offense is built on running the ball, getting into manageable 3rd–down conversions where the receivers can run underneath routes and rely on the quarterback to make the right decision. It worked last year, and it worked last week.

With an MCL sprain, it looks like the workhorse running back will be out for 4-5 weeks, at least. Mathews is a big part of this offense and will be a big loss.

Here’s reason 974 why stats are stupid: Mathews only averaged 3.1 yards a carry on 11 attempts versus Seattle. Glancing at the box score, that’s a bad day.

This doesn’t even take into account that he had 2 catches which he converted for touchdowns. I can’t hammer it home enough: Mathews is going to be a big loss. He brings a running style that no other back has.

So how will the offense adjust?

Donald Brown and Woodhead aren’t bad options to fall back on, at all. Against the Seahawks the duo combined to break or force 11 missed tackles. That’s pretty damn good.

Opting to use Woodhead in space — why they didn’t do that in week 1 is beyond me — turned out to be key and we can expect to see more of the same. We could see more screens or short passes that are essentially extended runs. Woodhead is an underrated inside runner, especially when they elect to run inside zone out of shotgun.

Brown is an interesting watch. He runs really hard, he breaks tackles, he can catch, and he’s fine as a pass blocker. Somebody brought this up Sunday and I totally agree: it’s fitting that San Diego plays the Bills Sunday because Brown runs like C.J. Spiller. By that I mean Brown thinks he’s much faster than he is. There are instances when he’ll try to outrun a defender to the edge only to be caught with ease. He needs to get upfield, use his power, and get what he can. 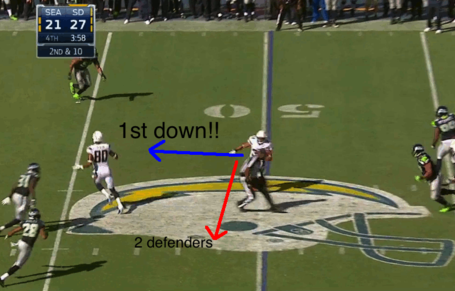 That’s just something to keep an eye on over the next month or so. We should expect a regression in "production", but both Brown and Woodhead put the team in a much better scenario than they were a year ago. The pressure really moves to offensive coordinator Frank Reich as well as Mike McCoy to remain diverse enough to keep the offense in 3rd and short situations where Rivers can work his magic.