The Blueprint for Scoring on the Seattle Seahawks

Kyle Posey goes through a year's worth of game tape to find the weaknesses of the Seahawks' vaunted defense, in hopes that the San Diego Chargers can exploit them and pull out a win.

Share All sharing options for: The Blueprint for Scoring on the Seattle Seahawks

Seattle has the best defense in the NFL.

Shocking, I know. If I had to describe this defense in two words, I'd use "sophisticated" and "simple". It seems like 8 out of 10 plays the Seahawks will line up with a single high safety and play Cover 1 or Cover 3 and basically challenge the offense to throw over their head. It's an aggressive defense that asks their back four secondary players to be physical, yet rangy. All 11 players on the field are fast, and they all are sound. When they get there, they make the tackle. Did I mention that they were fast? How's this for a stat: Last year, the Seahawks had 25 less tackles than the Chargers and played over 35 more snaps than San Diego. They don't make mistakes.

You can move the ball on them, though. Last year five teams score 20 points on Seattle. I went back and watched those offenses, along with last week's Seahawks game against the Packers, to see what tendencies give the Seahawks the most problems. I came up with four areas where the Chargers must attack Seattle if they want to be successful on Sunday.

Establishing the run in between the tackles

Those five teams that scored 20 points against Seattle a year ago carried the ball 72 times in between the tackles for an average of 4.9 yard a carry. Against a speedy defense like this, you have to run right at them. Whether it's an inside zone play, a power run, or a trap, you can run on Seattle. It just has to be right at them. The Texans were a team that had success up the middle, usually with a lead blocker. David Johnson could play a pivotal role on Sunday as paving the way for Ryan Mathews. Last week, Mathews had only four carries between the tackles. That can't happen versus the Seahawks. You have to keep pounding the ball, and stay patient, in order to have success.

Because Seattle plays so much of a single high safety look, teams always look to attack them vertically. Whether it's verticals, or a hi-lo passing concept. That's not how you beat them. That's exactly what they want you to do. They want you to throw that go route to the outside or challenge Earl Thomas up the seam. Defensive coordinators can live with 50/50 throws, and with these defensive backs, it's more like a 70/30 throw (in SEA's favor).

What you have to do is stress the linebackers, and Kam Chancellor. Seattle will run a boat load of Cover 3 Sky where Chancellor is the curl to flat defender and sprinkle in some Cover 1 where Chancellor is then the "robber." By attacking this way, you stress the field horizontally and put each defender in a bind. This then becomes an easy read for Philip Rivers and a high percentage throw. Here are a few examples. 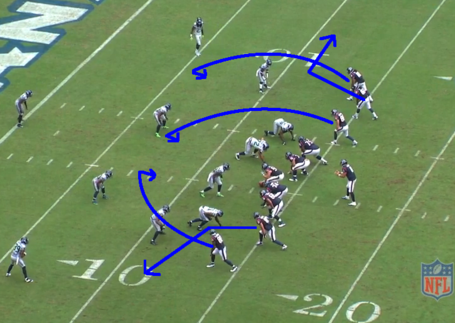 This was a big part of what San Diego did so well a year ago. 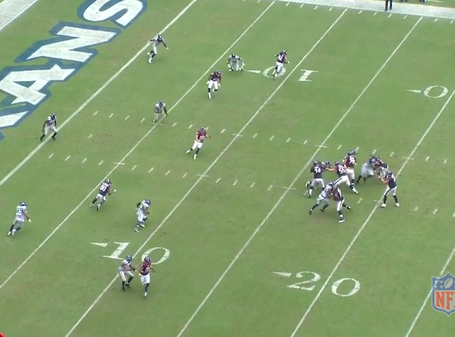 It seems so simple, but there are two players responsible for coverage over the middle, so you put three receivers there and let the QB decide.

The Vikings had similar success out of a 3x1 set. On this play, all four receivers run 6-yard curls. 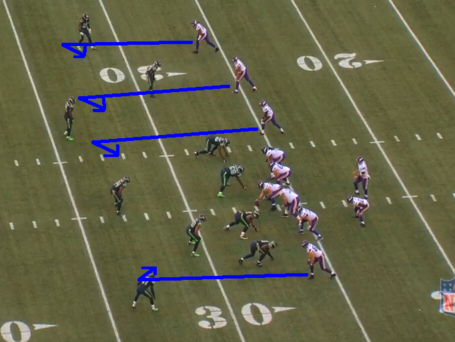 The QB is just reading Chancellor. Whichever way he breaks, he throws to the other curl route. Again, simple. 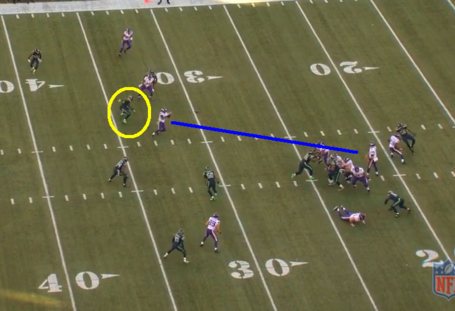 You can see Chancellor off balance as he's trying to get back to the #3 receiver. His initial read is #2, and him taking just two steps in that direction makes it a wide open throw for a first down.

As I side, Seattle will play Cover 1 quite a bit as well. It'll be important for the offense to get to the line of scrimmage to motion a receiver to determine the coverage. Once this is figured out, it should make things a little easier. Having the receivers run drag routes, or any sort of rub/pick routes is an easy man-coverage beater.

Below, Seattle has the perfect coverage for the crossing route, "Cover 1 jump."

Those are just a few route combinations. San Diego runs all of these and Frank Reich would be wise to stress the defense horizontally, not vertically.

Timing Routes outside the numbers

Teams seem to be afraid to throw outside of the numbers, and I don't blame them. Seattle has that one guy at left corner who isn't bad at football. The issue is when teams do decide to challenge the Seahawks outside, it's a vertical route, or a double move. These guys aren't the fastest, but they're so smart and can recognize route patterns quickly.

Teams that had success outside of the numbers threw timing routes toward Richard Sherman or Byron Maxwell. It obviously helps to have a Reggie Wayne, Larry Fitzgerald, Andre Johnson or Michael Floyd to do this. But San Diego has some good perimeter targets of there own.

This is a quick 5 step drop and throw. It's all about timing. The receiver has to sell that he's getting vertical and once the CB opens up then it's easy money. This has Malcom Floyd written all over it.

That was easy pitch and catch. It's not just to Maxwell's side. If done properly, it's an impossible route to guard, whether curl/out, unless the CB is completely sitting on the route. Andre Johnson caught a couple timing passes against Richard Sherman a year ago where Sherman couldn't have done anything in his power to prevent the catch. Green Bay did this in week 1 with Jordy Nelson quite a bit, and successfully I might add.

You have to challenge the corners, both of them. This is the best way to do so in my opinion. Timing routes that are high percentage throws. San Diego has two big-body receivers who are good route runners with good hands. Rivers can thrive off of these type of throws, and he should.

Using their aggressiveness against them

Fast defenses like to flow. They want to be the first to get to the ball. This is why it's important to establish the run. Once those linebackers realize that the run is a threat, they start to creep up, and over play. Earl Thomas has had a tendency throughout his career to do so, too. Use play-action passes and get those linebackers to commit to the run, while having your receiver leak out and replace the linebackers could potentially be big for San Diego. These are the plays tailored for Ladarius Green. Over routes behind the linebackers, or deep 1-on-1 flag routes.

Remember those two awful reverses we saw Monday Night? Well, the Texans ran an in outside zone play where they faked the reverse and the play resulted in 22 yards. Is Reich setting Seattle up to make them respect the reverse? We shall see. The Bucs had some success on 'trap' plays in Week 9. You know the pass rush is going pin their ears back, so inviting that rush up the field only to "trap" them with a pulling lineman is a great idea against this defense.

Lastly, getting your running backs in space. We saw it in the preseason with Danny Woodhead. Seattle isn't a big blitzing team, but if they do, make them pay. Woodhead on a linebacker, whether on a swing route out of the backfield or on his patented "Texas route" where he sells that he's breaking out and cuts back in. He is a mis-match and Reich needs to find a way to use him.