San Diego Chargers vs Dallas Cowboys: 3 things you should watch for in tonight's game

The depth as a whole should be the primary focus but Jerome Watson gives three things you should be zeroing in on in tonight's contest versus the Dallas Cowboys.

Share All sharing options for: San Diego Chargers vs Dallas Cowboys: 3 things you should watch for in tonight's game

San Diego kicks off their preseason tonight versus the Dallas Cowboys. With the Chargers upgrading the talent on the roster, the depth as a whole should be the obvious focus tonight. There are a few areas outside of the big picture, though, that you should be zeroing in on tonight:

Offensive Guard Chris Watt tops the list of things to watch tonight because 1) I have an obvious man-crush on him and 2) as a swing interior lineman, he should be on the field for a quite a bit of time tonight. This allows everyone to get an extended look and assess what he can bring to the table.

Cowboys DC Rod Marinelli, for as long as fans have seen him and his defenses, should be deploying an even front tonight. For Chris Watt, this means he should be in tandem for the majority of the contest, doubling the 1 Technique. While this is happening, you should be focused on his snap to contact speed and watch his uncovered footwork all the way through the whistle. From the the Right Guard position he will be the assistance and from the Center position he will be the anchor.

Lastly, in my evaluation of the Chargers Rookie Guard, I touched on his unorthodox starting stance and how wide it was. Since I was only able to attend one training camp day, I didn't get a chance to see if Coach Joe D tuned this up. So, tonight I'll be checking to see if the offensive line coach has allowed him to remain in his comfort zone since it has allowed him to win the majority of his battles up front.

(Editor's Note: It looks like Chris Watt will miss tonight's game after suffering a head/neck injury in practice earlier this week.)

The 12 Personnel Package. This isn't anything new for the Chargers Offense, as they obviously featured this personnel in the 2014 campaign. This season though, the players in this are a bit different. A bit bulkier. It's a rather 'Big' 12 Package. 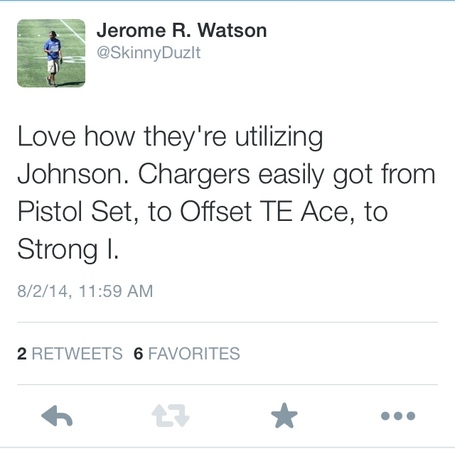 With TE David Johnson, the San Diego Chargers Offense can keep the same tempo they've had but do not lose any power. As I mentioned in the above tweet, the flexibility the Chargers "H-Back" brings allows San Diego to stay in traditional base sets, forcing the defense to play honest. This personnel can create the same headache for defenses that Ken Whisenhunt was creating.

Out of this package, Chargers can deploy 3 legitimate receiving weapons (4 if Danny Woodhead is at Tailback) with a 6 man protection. They can bounce from Zone to Gap Runs a lot smoother and for the most part can simply pick and choose when/where they want to run at any point.

Whether it was the 7 on 7 passing segment or the Live 11 on 11 segment, the Chargers Defense consistently smothered the short passing game. They were alert and seemed to recognize the play concept based on formation. Often, guessing right.

On almost every snap, Jahleel Addae relayed info swiftly to his defensive backs. This allowed S Eric Weddle to assist the second level with recognition and as a result, the defense was playing a whole lot faster. The checking off of the crossing Wide Receivers seemed effortless and was refreshing sight.

Let's see if this has resonated to the second and third units.