Good and Bad - San Diego Chargers' QBs against the Seahawks

While I keep reminding myself that Friday's poor showing in Seattle was "Just A Preseason Game," I wanted to share a few thoughts about the Chargers' QBs.

Share All sharing options for: Good and Bad - San Diego Chargers' QBs against the Seahawks

Around this time last year, a fair number of us Chargers fans were legitimately concerned that Philip Rivers had devolved from Pro Bowl QB to Carson Palmer 2.0. Thankfully, Rivers, Head Coach Mike McCoy, then Offensive Coordinator Ken Whisenhunt, and then QB Coach (now Offensive Coordinator) Frank Reich helped to disabuse us of that notion over the course of a terrific 2013 season.

I don't have much interest in rehashing the Seattle game. However, I wanted to point out a couple of things about the QB play for the Chargers on Friday night, and give us all some points to look at in the final 2 preseason games.

This play is my favorite play from Rivers so far this preseason, and that it involved a healthy Malcom Floyd is not merely welcome, but I think essential in this case. 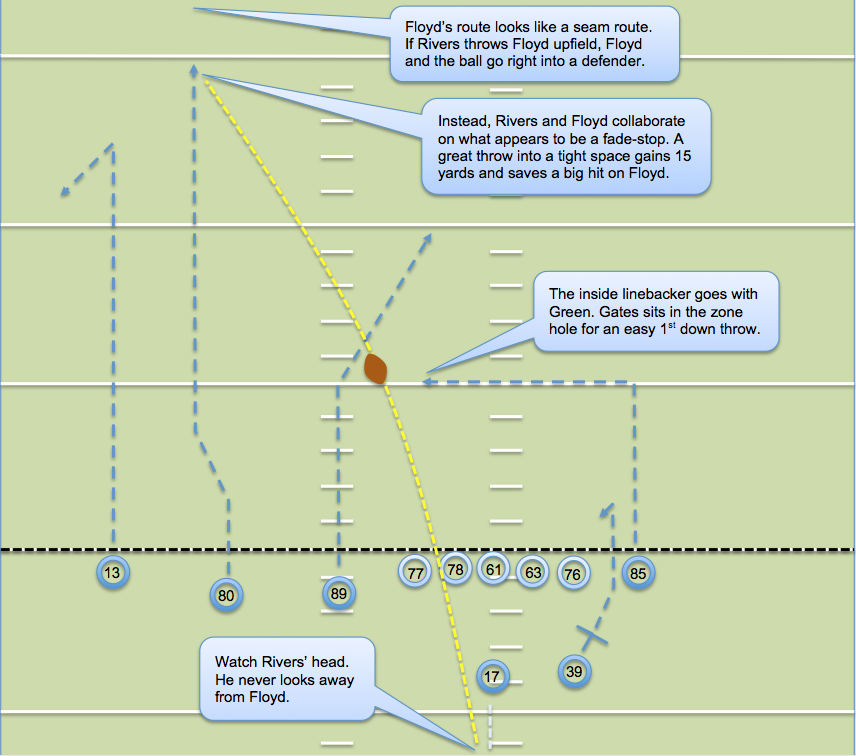 What I love about this play is something that can't be done with athleticism. It can only be done with brains and reps and long term teammates. One of the most amazing things about Rivers' 2013 season was that he had only 1 receiver (Gates) with whom he's had lot of practice, and who could be counted on to make the proper sight adjustments and go to the right spot on the field.

Floyd is likely the only receiver besides Gates with whom Rivers could've executed this play, against this caliber of defense. Rivers having this kind of trust with another target can only help the Chargers in 2014.

Everything about this play was terrific. Blocking was sensational. Ajirotutu runs a nice corner route against tight coverage with a high safety coming over. Clemens puts the ball in the perfect space, avoiding the defenders and also protecting Ajirotutu from a big hit.

I thought his was the best throw of the night for Clemens, resulting in a big gain against tight coverage. You'll see how important mechanics are for Clemens, however, when you see a throw from earlier in the drive.

Kellen Clemens - Not So Good

This play was killed by bad footwork from Clemens. Very few QBs can get away with this kind of footwork (Dan Marino comes immediately to mind). One other thing Clemens could do to improve would be to shorten his release by holding the ball behind his ear. Luckily, there's another QB who can demonstrate this.

The play: 3rd and 12 at the SD 33 yard line. 8:22 left in the 4th Quarter. The focus of this play isn't the receivers, the formation, or the route concepts.  We're focused on Sorensen's fundamentals.

Sorensen may not be an exceptionally talented QB, but he's an exceptionally well coached and practiced QB. It's entirely possible Sorensen has reached his ceiling, and he certainly isn't a lock to make the roster. He may not be picking up NFL defenses as well as the Chargers coaching staff would like - the play before the one shown above where Sorensen failed to identify a free blitzer would be an good example.

But Sorensen does show how far you can get with excellent fundamentals. If I were coaching young QBs on passing fundamentals, Sorensen would be a good example to follow.