Kyle Posey takes a look at the 2014 San Diego Chargers, and who he thinks they will be once the regular season begins.

Share All sharing options for: Preseason thoughts on the San Diego Chargers

I know most of you aren't fans of his, but Peter King does something for his MMQB website that I think is pretty cool, and I decided to put my own twist on it. His segment is called "10 things I think I think" and it's generally about random NFL topics. Because we here at BFTB only care about one team, my thoughts will obviously be San Diego Chargers-related. This is really just some thoughts from the first couple preseason game and training camp altogether.

Last year, San Diego was 12th in DVOA in rushing as a team. Against their first two opponents, I liked what I saw. The diversity of runs is there, and better yet, the blocking should be improved. Ladarius Green has been close to lights out in the running game these last two weeks. His effort compared to Antonio Gates as a blocker is night and day. Add in newcomer David Johnson and a clear upgrade at right guard, it's not a reach to suggest top five is a possibility. In the first two games, when the first team offensive line(all snaps with D.J. Fluker and King Dunlap with the interior being mixed and matched) was in, the running backs ran for 70 yards on 15 carries. I don't blame you if you think this all came against Dallas. Actually, In the 1st half against the Seahawks, the Chargers were able to run the ball 8 times for 41 yards. Averaging over 5 yards a pop versus a defense like Seattle is nothing to shrug off.

I think the tackling on defense is embarrassing

PFF has the Chargers down for 22 missed tackles in the 1st two games. That's incredible. Pathetic. The number doesn't take into account where you don't even get a hand on a player, and I know off the top of my head Richard Marshall and Tourek Williams have completely whiffed in the open field. The team was 10th worst at missing tackles a year ago, and in the scheme they run, if a member of the secondary misses a tackle it's at least a 1st down. This has to change. Quickly. Four of the first five plays against Seattle, four different players missed a tackle. Yes, this is a coaching issue. 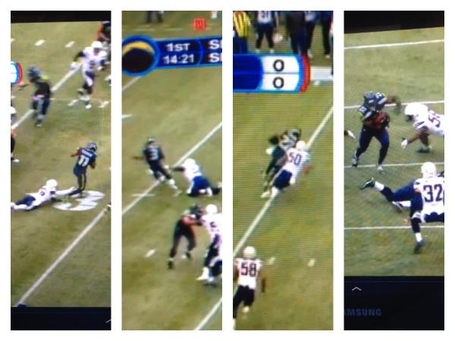 I think Chris Watt could help this offense in a hurry

I will be the first to admit that offensive line is my clear weakness when watching football. If you're not overly powerful, or a crazy athlete, it's hard for me to get a great feel for you. I'm learning, and Watt is doing a damn good job of teaching me. As a pass protector, wow. You see Watt's head on a swivel constantly looking for blockers to pick up. You see him picking up stunts with ease, like in this GIF. He seems prepared. He seems like he's seasoned and understands what is coming. As a run blocker, he does exactly what is asked of him. He does a good job on combo blocks and has no issues getting to the 2nd level. In this offense, that's all you need at right guard. Keep a close eye on Watt moving forward, but I think Tom Telesco might have done it again.

I think Kendall Reyes had better adjust and do so soon

Man, it feels like yesterday when we thought that Reyes was a star in the making. Well, a full season of tape when opponents can prepare for you as a starter and here we are. Do I think Reyes is being poorly used? Absolutely. Watch this GIF against the Seahawks. Notice his alignment? In a gap, where he can use his quickness. He beats the OL and makes the play in the backfield. Unfortunately, for every one of those, it seems like there are 10 plays where he gets washed out or pancaked to the ground. The very play before that previous GIF, this happened. Under no circumstance should you see a defensive lineman facing the line of scrimmage 9 yards away. Reyes needs to figure it out if he's going to play as a 5 technique in this defense. His getting blown off the ball is carrying over to his being an ineffective pass rusher. Simply put, he has to adjust.

I have no doubts Woodhead is the most underrated player on the team, but I could argue he is in the NFL. Not only does he catch everything but he can hit another gear and out run the defenders angle or make you look silly in the open field. He's a walking mismatch that is a big play waiting to happen when he gets his hands on the ball. His value doesn't stop there. Woodhead has been asked to be the primary pass protector in the back field for Philip Rivers, where he rarely disappoints.

Rookie DBs rarely come into the league and shine. I'm not expecting it to be smooth sailing for Verrett all season, but the routes that the 1st team guys are getting beat on are tailor made for Verrett's skill set. Whether it was the Dallas game where Steve Williams was just a step late to react to a slant and a curl, or versus Seattle where Shareece Wright gave up a 1st down in coverage from the slot. The more I see these quick hitting passes, the more I think Verrett will help the defense. Let's hope he's the corner that they move around, and not Brandon Flowers.

Last year, San Diego was the 5th most penalized team in the NFL on offense. They averaged 6 penalties per game; that's a problem.  This offense is built for 2nd and 6, 3rd and 4. Rivers is a rhythm quarterback, and a damn good one at that. Last year he completed 74% of his passes when he got rid of the ball in 2.5 seconds or less. That number dipped to 63% when he held onto the ball longer than that. Once you get into those longer down and distances, that's when you put more and more pressure on the offensive line to hold their blocks longer. If the team can cut that number in half to 3 this year, that will go a long way in helping them convert touchdowns instead of settling for field goals.

Because if not, the pass rush will be a problem. Football Outsiders does an interesting study called SackSEER, a model that projects 5 year sack totals for edge rushers coming into the league. Here's what they predicted with Melvin Ingram:

As you can see, that's not good. I'm not saying that this model is the end-all-be-all, but it tells you how much Ingram has developed. Ingram has no idea how to rush the passer, and that's troubling. Especially considering he's supposed to be "the guy." He doesn't really counter the offensive lineman, and he doesn't have anywhere near what you could call an array of pass rush moves. He might lead the league in 'almost plays' by year's end, but those hustle plays that he misses turn into 1st downs for the offense. I'm not as worried about rookie Jeremiah Attaochu because we knew he would take time to develop coming in. As of right now, it looks like Corey Liuget and a bunch of bodies, which is a problem considering you-know-who cannot manufacture pressure as a play caller.

The missed tackling has been a problem, no arguments there. Who would you say the 3 best run defenders in the front 7 are? I'd say Jarret Johnson, Sean Lissemore, and Liuget. How often have they been on the field for the 1st 2 games? Good guess, zero. I don't see how someone can watch Lissemore and not be impressed. Last year Lissemore had an "impact play" once every 10 plays. Liuget had 1 every 19, Cam Thomas had 1 every 20, and Reyes 1 every 23. Lissemore is the real deal. As far as JJ's impact, Seattle doesn't get to the edge if Johnson is on the field. Period. The defense will be missing Lissemore and Manti Te'o against the 49ers. So Kwame Geathers, who has been hot and cold in the two games, will get his chance to show what he can do against a San Francisco team who quietly struggled to run the ball up the middle last year. If they get gashed and give zero resistance this game, then it's fair to be a little concerned.

I don't want to get too heavy into predictions and the schedule because we will be doing that as a staff as the regular season gets closer, but I think San Diego is destined for a better season than most outsiders are predicting and I'll leave it at that.