Jerome Watson highlights the most valuable player of the second quarter scoring drive issued by the Chargers' Second Team Unit.

Share All sharing options for: San Diego Chargers TE David Johnson was the MVP of win over the Dallas Cowboys

The San Diego Chargers second offensive unit issued an impressive scoring drive to open up the second quarter against the Dallas Cowboys last Thursday night. The unit methodically marched down the field in 9 plays for a total of 80 yards in 5 minutes and 33 seconds. For my fellow run game and offensive line enthusiasts, this drive was a work of art. It featured only 3 passes and more than a handful of no-nonsense run plays.

The point of this post isn't just to look at the drive itself but to highlight some of the talents of the MVP of the drive, tight end David Johnson. The Chargers' newly acquired H-Back showcased his versatility and really gave fans a glimpse of the dimension he brings to San Diego's potent offense.

We start at the 11:42 mark of the Second Quarter 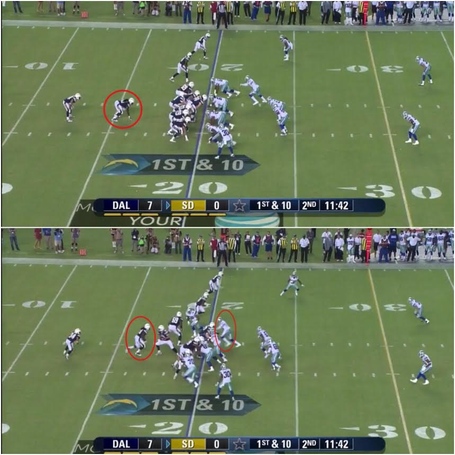 First Down and 10 from the San Diego 20. San Diego comes out in I Formation, Twins Left. As you can see, David Johnson is in at fullback. This is a throwback, isolation call. Dallas' Will Backer gets downhill in hurry and Johnson almost runs by him. Luckily for him, RB Donald Brown is a seasoned vet and hop stepped the linebacker and got positive yardage. 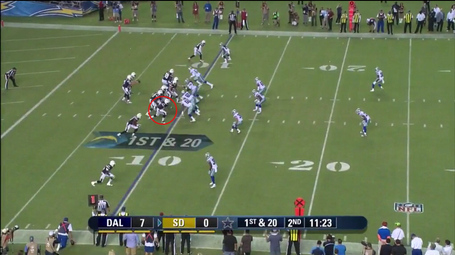 First Down and 20 from the San Diego 10. The Chargers offense, now backed up, comes out in a Gun Left formation with Trips to the Right. David Johnson is now a receiving option as he is now standing, snug to the Right Tackle. On this play, he has seam responsibility and basically clears out the middle for an underneath route by Seyi Ajirotutu.

Result of the play: Positive Yardage (Penalty Flag on the Defense, illegal hands to the face.) 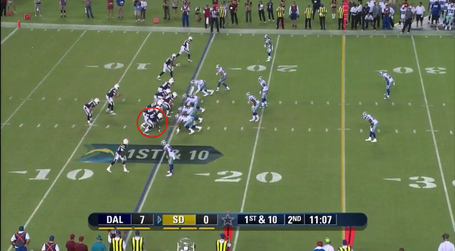 New set of downs for the Chargers. They come out in a Gun Normal/Deuce set and now TE David Johnson is attached to the line of scrimmage with his hand in the ground. The play call is a Draw to his side and he slips underneath the defensive player stacked on the RT and locks up with the Dallas middle linebacker.

RB Donald Brown receives the hand-off right and gets around the right end for more positive yardage. 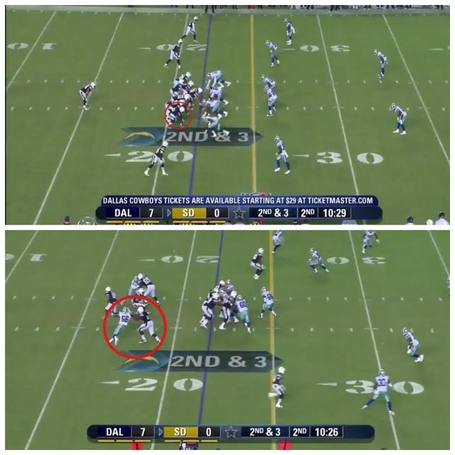 After gaining 7 yards on the draw play, San Diego lines up under center in Single back set (Deuce). The MVP of the drive still has his hands in the ground to the right and as you can see the formation forces Dallas to be honest with no movement.

The Chargers run a Blast to the opposite side of the Tight End but the running back cuts it back to Johnson's side, where he has invited the up-field rush. 8 yard gain for the offense and they are just picking and choosing. 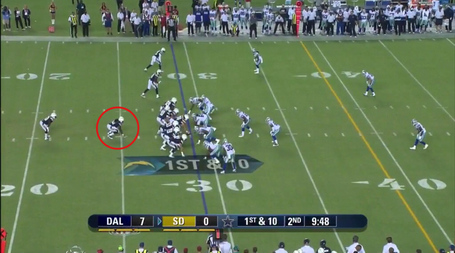 After netting yet another fresh set of downs via the ground, the Chargers line up in the I Twins Left formation again and deploy Johnson from the fullback spot. It's first down and San Diego is in a traditional set, so Dallas decides to load up the box to better defend the run. QB Kellen Clemens wisely checks to a smoke screen to Ajirotutu. This nets the offense 11 yards and a new set of downs. 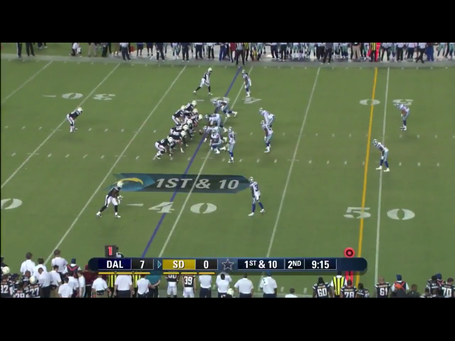 Dallas is beginning to get impatient here and is reacting to the unbalanced Singleback Set by loading up to the offense's right side. This is where David Johnson is located. The Chargers' signal caller noticed they had a numbers advantage to the left and simply took what the defense gave him. The result? 14 yards and yet another set of downs for the offense. Picking and choosing at its finest. 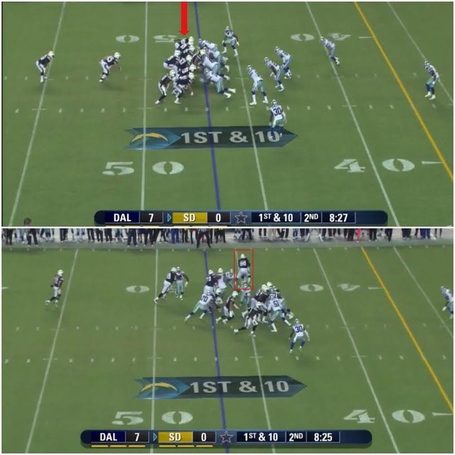 The Chargers get back into a Heavy I Formation set on this first down. This time Johnson isn't the Fullback but an attached TE to the left. Ajirotutu motions into the formation to create an unbalanced look. The Dallas defense reacts to it and begins flowing that way. Unfortunately for them, The Chargers run the rock to the MVP's side and he just swallows the corner on his side. The San Diego offense finds itself in another manageable second down after netting 4 yards. 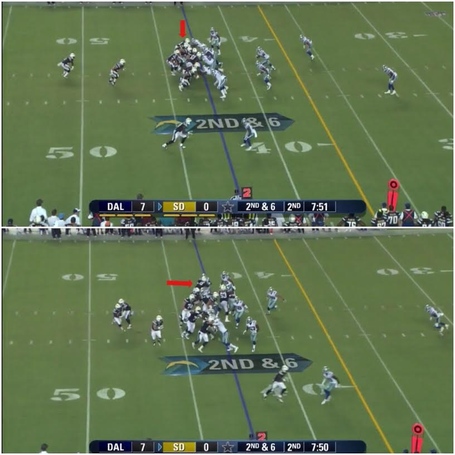 San Diego remains in their Heavy I Package but don't motion the Wide Receiver into the formation this time. They motion the fullback over to give a Broken I look and run the stretch to the right; opposite of David Johnson's position. San Diego only gets two yards on the carry, but you can see the work Johnson does on plays 10 yards away from him. 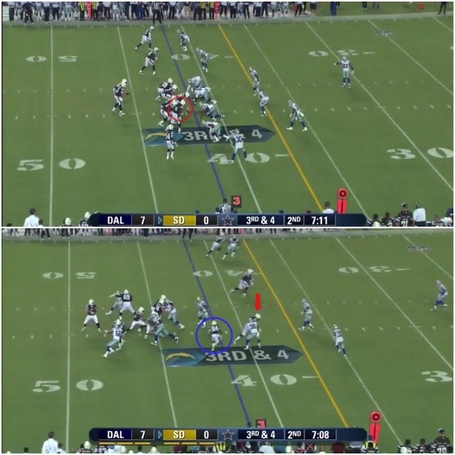 Manageable third down for the Bolts' offense here. They are in Gun Left Doubles. The MVP is flexed with a short split and is tagged with seam responsibility. Chargers WR Buster Davis Tevin Reese motions into the formation to create a stack with Johnson.

Again, David's route opens up a man coming underneath. He hasn't had a highlight play yet, but you see San Diego using him to free other guys. This play results in 17 yards and another first down. This, has been fun, hasn't it? 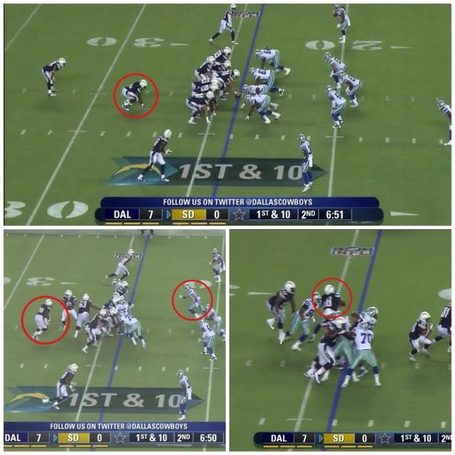 New set of downs for the Charger Offense and they are deep in Cowboys territory now. David Johnson is back at fullback, as they are in a Strong I package. The play call is a counter left and Johnson shows he can block and drive from any angle on the field. He washes the Dallas Linebacker, RB Donald Brown finds the crease and gains 10 yards on the carry. Another positive gain, another short yardage second down situation. 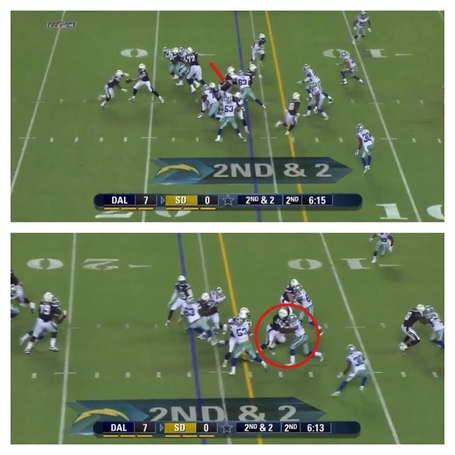 To ice the drive, San Diego lined up in I Normal and kept the punishment up. Here, they reverted back to the isolation call and you see David Johnson doing serious work. What was most impressive about him and this block was that contact was made at the 13. When RB Branden Oliver scored, you saw David Johnson driving him all the way to the goal-line. THAT'S how you finish a play and that's how you finish a drive. [Editor's Note: We haven't seen a lead blocker like him since Neal.] 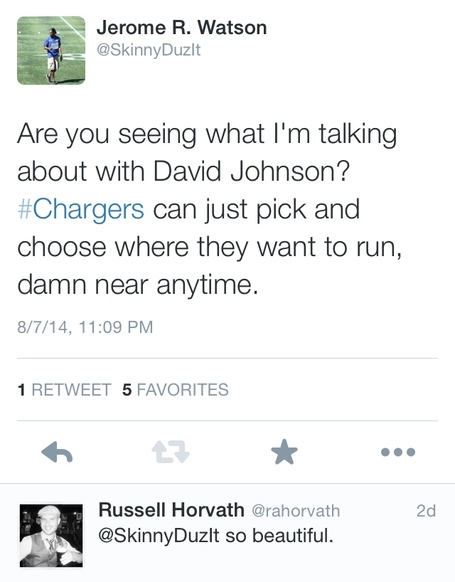 Yes, Mr. Russell, you are right. That drive was a thing of beauty.