Is the Third Time a Charm?

Twenty plus years of history suggests this season might be a disappointment for the San Diego Chargers. But let's see if the past really is prologue for 2014.

Share All sharing options for: Is the Third Time a Charm?

I was pleasantly surprised to see the 2013 San Diego Chargers advance to the playoffs, much less win a playoff game. Around this time last year, I was optimistically suggesting the Chargers had as much chance to reach the playoffs as Andy Dufresne had of escaping Shawshank Prison, while hedging my bet and officially predicting a 7-9 season.

Oops! Should've trusted my instincts like I did when I purchased a Danny Woodhead jersey before the regular season started.

In either case, last year was the 3rd time in the last 20 years the Chargers managed to defy expectations and end multi-year playoff droughts. Previously, the Chargers were able to do this in 1992 and also in 2004.

The downside... the Chargers missed the playoffs in both 1993 and 2005. Let's take a closer look at both of these instances.

Before we begin, there are some factors which should be considered when looking back at 1992 and 1993.

1992 saw the arrival of former college coach Bobby Ross, following three hapless seasons under Dan Henning. Following an 0-4 start which saw the Chargers lose by a combined score of 95-29, the Chargers righted the ship against the moribund Seattle Seahawks at home with a 17-6 victory.

Following the bye week, and behind the improved play of 1st time starting QB Stan Humphries, the Chargers compiled a 10-1 record, en route to an 11-5 regular season (the only loss being a defeat at Arrowhead Stadium which the Chargers led late), their first AFC West title since 1981, and their first home playoff game since the 1980 postseason - a 17-0 victory over the Chiefs in the AFC Wild-Card round. The next week, the dream season came to a crashing halt against the Dolphins, who beat the Chargers by a score of 31-0.

1993 was a season of high expectations. The Chargers had solved their long term problem at QB. They had young talent at key positions. The Raiders and Broncos were coming off non-winning seasons, Seattle had rookie QB Rick Mirer under center, and while the Chiefs had traded for living legend Joe Montana, he hadn't played meaningful football in 2 seasons.

Except... Humphries was injured during the preseason, hindering the offense for the first half of the season, and the schedule featured 10 games against eventual playoff opponents (Chiefs x2, Broncos x2, Raiders x2, Packers, Vikings, Oilers, Steelers). The Chargers went only 4-6 against those playoff teams, and they needed wins in the final 2 games just to reach 8-8.

Here's a look at a few numbers from those seasons:

This is a clear cut case of a team which played a soft schedule in 1992  (see also this recent Football Outsiders article). The Chargers had a 3-2 record in close games, but a 7-3 record in games decided by more than 14 points. The 1992 Chargers were a good team which did what good teams do - beat the tar out of bad teams to the tune of an 11-1 record. Against teams with an expected win total of 8.0 or more, however, the Chargers managed an 0-4 record. See the graph below for a schedule comparison:

The numbers also suggest the 1992 Chargers expected performance matched their final record - they overachieved by only 0.03 wins. The 1992 Chargers survived (one might say benefitted) from horrendous injury luck - remember John Friesz was the original starter at QB in 1992 - following Humphries' acquisition from Washington via trade.

As mentioned above, the 1993 Chargers also started the season with a QB injury, in this case, the injury hampered the Chargers until November as Friesz started 6 games, finishing with a 2-4 record. As for the Chargers record in blowouts, they went 3-2 in such games, while posting a 5-5 record in close games. The 1993 Chargers, likely reflecting their injury luck and schedule concerns, were definite underachievers - they underachieved by almost 1 full win (-0.99). That said, only 2 of the Chargers 8 losses were against teams with expected win totals below 8.0 (Seahawks, Raiders).

The 2004 Chargers were going to be an epic disaster. Drew Brees would be supplanted at QB by rookie Philip Rivers. Marty Schottenheimer would be fired following 3 disappointing seasons, and A.J. Smith wouldn't last 2 full seasons on the job as GM.

Following a 1-2 start, the Chargers had a critical home game against the Tennessee Titans (a game which would have seen Brees benched with another shaky performance) and won going away, 38-17. Brees solidified himself as a quality NFL starting QB, the newly installed 3-4 defense jelled under 1st year Defensive Coordinator Wade Phillips, and the Chargers caught fire by winning 11 of their last 13. Unfortunately, the Chargers couldn't cash in their home playoff game, losing to the Jets 20-17 in overtime.

2005 was a season of high expectations. The Raiders were a train wreck, the Broncos were coming off a middling 9-7 record and horrendous playoff loss, and the Chiefs were the proverbial "knockout puncher with a glass jaw" thanks to a great offense and terrible defense.

Unfortunately, 2005 was a regular season of pure maddening frustration. It started with tough losses to Dallas and Denver, incongruously followed by utter domination of the Giants and Patriots. Back and forth things went, leading to a 4-4 record, until the Chargers mounted a 4 game winning streak to get to 8-4. Just as the season appeared righted, the Chargers tanked a critical home game against the Dolphins, on their way to losses in their last 2 games, and the ignominious end of Drew Brees' career as the Chargers' starting QB.

Here are the numbers from those seasons:

Really, the difference between these seasons is the Chargers lost the close games they managed to win in 2004. They were just as dominant in blowouts in 2005 as they'd been in 2004. Their 2004 opponents weren't as strong overall, and they managed a 4-4 record against teams with an expected win total of 8.0 or higher. The 2004 Chargers, like their 1992 predecessors, did what good teams do - destroy bad opponents. Here's the graphed schedule comparison:

2005 featured a 5-6 record against teams with an expected win total of 8.0 or higher (yes, only 5 games against losing teams). In terms of sheer talent, the 2005 Chargers might be the best Chargers team ever not to make the playoffs.

Here's what the BFTB staff expected of the Chargers in 2013.

Here's the numbers for last season:

Speaking for myself, I figured it would take Mike McCoy and Tom Telesco 2 full seasons to restock the roster, and that once the bad contracts were off the books in 2015, the Chargers would make their big push pack to contention.

In terms of schedule, this is close to 2004 in terms of overall average opponent strength. What's really different from 2004 (and 1992) is the Chargers performance against opponents with an expected win total over 8.0. The Chargers finished 6-2 against quality opponents (this also means they weren't good against bad teams with a 3-5 record). Here the schedule graph: 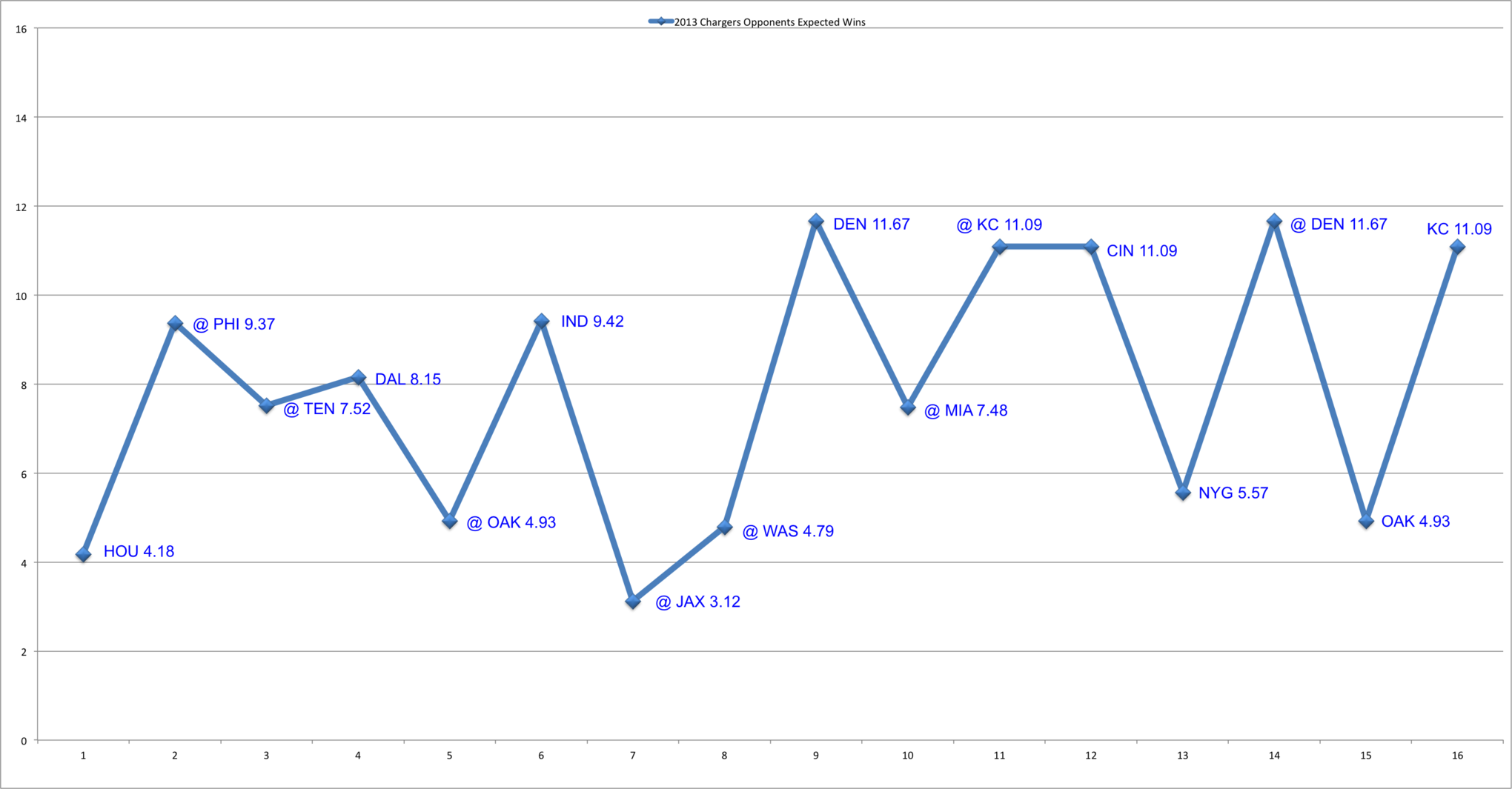 The 2013 Chargers managed to overcome an overmatched and injury-riddled defense with some sensational game planning by the Chargers' coaching staff. By the end of the regular season, the offense was an efficient clock-eating machine, and the defense had improved to functional. It was enough for the Chargers to win a road playoff game against the Bengals and hang tough in a divisional round loss to the Broncos.

There's reason for optimism with the 2014 Chargers:

Hopefully for all of us, the 2014 season will be the end of the streak established by the early 1990s and mid 2000s Chargers teams.