How John Pagano Can Improve as a Play-caller in 2014

Kyle breaks down what worked and what didn't in the Chargers' 2013 pass defense.

Share All sharing options for: How John Pagano Can Improve as a Play-caller in 2014

Heading into year 3 of being Defensive Coordinator, the excuses are starting to run out for John Pagano. I've been one of his biggest critics, and never felt like talent was the biggest issue. This offseason, General Manager Tom Telesco has helped bolster the secondary by drafting Jason Verrett in the 1st round, and signing free agent Brandon Flowers. With a group of competent edge rushers, to go along with Corey Liuget and Kendall Reyes, there's no real reason (barring injuries) for the defense to be worse than league average in 2014.

My biggest issue with Pagano has been his lack of creativity. In my opinion, when you have a stacked roster, like the Seahawks, that's when you can play vanilla. That's when you can let your talent win for you. The last 2 years in San Diego, it's been the opposite. What makes it so frustrating is that Pagano has pulled out some brilliant play calls during key moments of the game. These have been few and far between, though. Today I'll go over a few examples of what hasn't worked, what will work, and how San Diego can improve on being the 21st best team against 3rd downs in the NFL.

Blitzing with a Purpose

Predictability was an understatement last year for this defense. The Chargers were dead last in defensive DVOA for obvious reasons. When they didn't blitz, it was off coverage, rush 4, drop 7, easy completion. Rinse. Wash. Repeat. When they did blitz, you could bet to see this double A-gap blitz.

Neither Donald Butler nor Manti Te'o showed that they were effective blitzers, yet, Pagano insisted on going with this blitz look. Within a second of the snap, the blitz was exposed. Peyton Manning slid the protection and both blitzers were swallowed up by the lineman. In 2013, Butler blitzed 17% of the time he was on the field. He's a very good athlete. Butler should be utilized in space where he can make plays. Rushing the passer with Butler is a double negative.

If not for this double A-gap blitz, you could expect to see Butler and Te'o stunting as they blitz up the middle. This was another popular, yet ineffective blitz from a year ago.

The issues with this blitz is that no one on the field is going to win 1-on-1 quick enough for the blitz to work. Also, as I've stated, the blitzers weren't winning their battles, either. 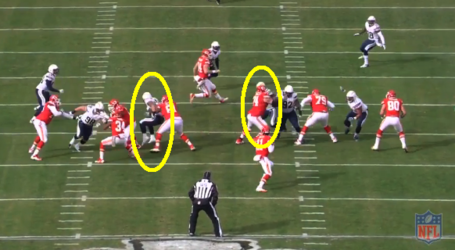 To the left, you see Te'o engulfed before he can even stunt to the other side of the line. The QB is well into is drop and Butler hasn't crossed the line of scrimmage yet. Blitzing with a purpose was an issue in 2013. The 2 main reasons you blitz aren't necessarily to "get home", it's to cause confusion to the quarterback, and most importantly, create 1-on-1 situations for your best pass rusher. That would be Liuget, and he wasn't being put in those situations a year ago. Moving forward it'd be nice to see Pagano move away from these A-gap blitzes.

Let's jump to one of Pagano's best calls of the year, a 3rd & 6 blitz versus the Colts. With more athletes at his disposal this year, there's really no reason we shouldn't see more and more "psycho" type looks like this. Below is the pre-snap look, and the circles tell you that the defender is in man coverage. The rectangles are players in zone. 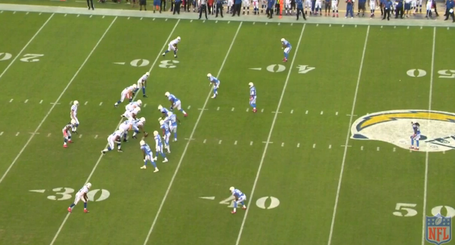 The pre-snap look reads as if it's off-man Cover 1, with an over load blitz coming from the defense's left. I love the confusion with each defender standing up. 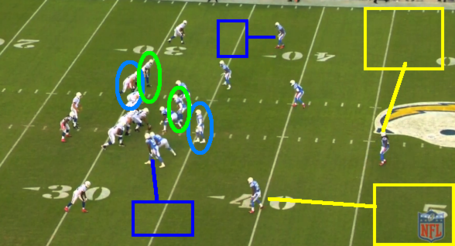 Quite the combination of coverages, I'd say. It comes off as Trap Cover 2 with a fire zone blitz, but with the 2 circles in man coverage, I'm not sure what to call it. Here's the play full speed.

If you replace the players above with a healthy Chargers sub-package, we're looking at a unit of Dwight Freeney, Liuget, Reyes, Melvin Ingram, Jeremiah Attaochu, Flowers, Verrett, Eric Weddle, Addae, Wright and Butler. If you field that lineup you're forced to get creative.

While the off coverage bothers many fans, it's execution errors that cause the scheme to fail. Last year, the secondary would give up the catch before the 1st down, only to miss the tackle and allow the drive to continue. That's been addressed this offseason by adding 2 very willing tacklers at the cornerback position. That said, there was still way too many instances where you're seeing the same simplistic coverages on passing downs; coverages that offenses has no issue at all beating. There are endless 3rd down examples of this, and I'm sure you remember them all.

Disguising What You Already Do

If you're going to run a 3-deep look, you might as well disguise it. This didn't happen nearly as much as it should have, but when it did, it was beautiful. The interception versus the Dolphins comes to mind. The defense came out in their standard 2-deep dime defense. 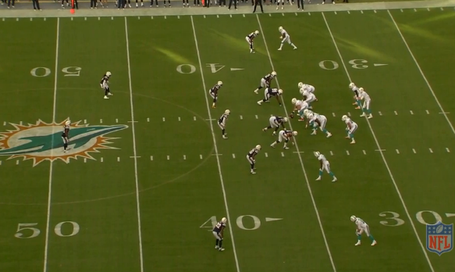 Giving off the impression of 2-man coverage. When in reality, it was a Cover 3, and the QB never saw it coming. Here's each defenders' coverage responsibility. 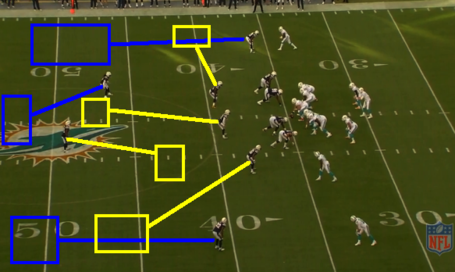 The quarterbacks pre-snap read gives him the impression that he'll have 1-on-1 coverage to the bottom of the screen. He doesn't account for the hook/curl defender, and the result is an interception. Here's the play at full speed:

It's important that the defender who makes the interception gets enough depth on his drop, and here he's rewarded for doing so.

Putting It All Together

So we've seen what happens when you cause confusion with the blitz, and what happens when you disguise your coverage. When you put both together, you give the offense an exotic look, and it usually results into a win for the defense. The best example of a "complete call" I could think of is Wright's interception in the wildcard playoff game on a key 3rd and 8.

Here is the pre-snap look: 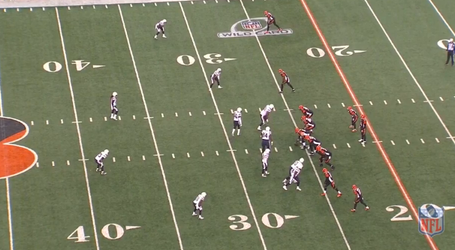 This is a Cover 2 Trap. It's a brilliant coverage and one of my favorites. Here's the assignments for the defense. 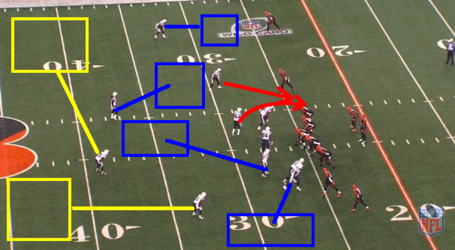 In this defense, the "trap" is the strong-side CB, or Wright to the top of the screen in this case. He gives the illusion of it being Cover 3 by taking 1-2 steps back post snap. He then stops and and covers the flat as if he's in a Cover 2. It's the perfect call, as the Bengals throw right into the trap. Here's the play live:

Looking For Consistency in 2014

While these are just a few examples, it's no coincidence that when Pagano did get creative, the defense had success. This is why I ultimately believe in coaching>talent. He's shown that he can dial up pressure; the issue is it's just so few and far between that it comes off like Pagano is playing a guessing game at times. This year, with an improved roster, let's see if Pagano evolves as a coach, and does a better job of manufacturing pressure, as well as creating 1-on-1's for his best pass rushers.

The roster isn't stacked. This isn't your 2007 pass defense, or your 2006 pass rush. However, the roster is at a point where Pagano is out of excuses. There are too many young players who should be further along in their development. 2014 is the year for Pagano to take the next step as a coach, period.