Film Friday: What does Chris Watt bring to the Chargers?

Stephen Hwang breaks down rookie OG Chris Watt's strengths and weaknesses to one of the weakest positions on the Chargers' offense.

Share All sharing options for: Film Friday: What does Chris Watt bring to the Chargers?

For the past few years, the main problem on the San Diego Chargers offense was the offensive line. More specifically, both guard positions of the Chargers were, at best, below average.

As much as I love him and would not have any other quarterback in the world, the poor guard play is because of Philip Rivers. When a team’s quarterback does not have the ability to scramble from the pocket from pressure, the main concern across the offensive line should be in the interior. Sure, the bigger hits/sacks from opposing defenses come from the outside pressure, but outside pressure can be avoided with great interior protection and one more thing: stepping into the pocket.

With non-mobile quarterbacks, with scrambling out of the question, the main way of avoiding pressure is to step into the pocket to find more time. Rivers didn't do this in 2011 and 2012, which is a big reason why he struggled. Switching to quick 1/3/5 drop sets instead of the 5/7 drops that Norv had Rivers running helped a bunch.

To address these problems, in the third round of the 2014 Draft, the Chargers selected Chris Watt out of Notre Dame. Though many are high on the selection of Watt, I’ve decided to go into the tape and dissect whether or not Watt was the right selection for the Chargers.

What do I look for?

When I look at offensive linemen, there are is a list of things that I look for fundamentally from the prospect.

If you’ve read my previous article on Jason Verrett, you know I could care less about a prospect’s measureables. I go solely by what’s on the film because no matter how much of an athlete a prospect is, the film never lies on the prospect’s skill.

Watt has a phenomenal kickout, has great use of his feet, and is very good with leverage against opposing players. The film I love to use in my examples for Watt is the game against USC, where he went against one of the best defensive lineman in next year’s draft class, Leonard Williams.

On this play, the Notre Dame offense is lined up in a shotgun formation with Williams lined up right across from Watt. Williams is obviously going to be his blocking assignment as this will be a simple pass pro. In a pass pro, the kickout is the first and foremost thing for an offensive lineman. The kickout establishes positioning against the defensive lineman and will determine not only the feet, but the hips’ position in the play. 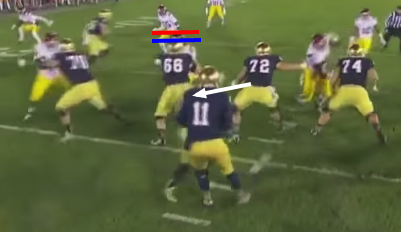 Watt gets a great kickout at the snap, with his hips low and head positioned lower than his opponent. Not only does Watt have positioning against his assignment, but he also has the leverage needed to contain his man. 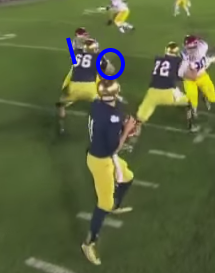 It’s hard to see in this picture alone (you’ll see it more below), but Watt has great use of his hands against the defense. One is extended to give Watt the outside leverage against the defender while the other is constantly punching his man, allowing for the d-lineman to rush unbalanced.

Overall, Watt shows a solid knowledge and use of his fundamentals against one of the best competition in college football.

Watt has been the second most frustrating prospect I’ve evaluated in a very long time (the first being Ryan Carrethers, which will be coming soon). Watt, while being very skilled with his fundamentals, seems to lose his head during games. At times, he shows flashes of being one of the best guards in college, but then he seems to forget everything he’s learned and turn into a sack of potatoes off the snap.

Here’s an example from exactly two plays after the play above: 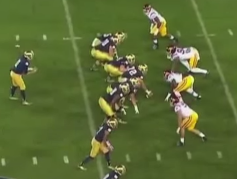 This is the same defensive alignment that Watt has faced and the same pass pro that he ran exactly two plays prior. 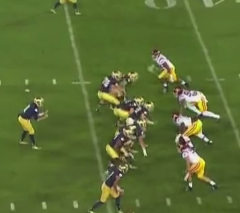 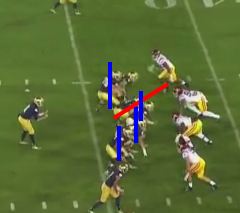 First off, Watt is late off the snap. Look at every single one of his teammates getting right off the snap, but Watt seems to be lost in the play and gets off the snap late.

Because Watt is now late off the snap, Watt does not perform a full kickout and is not in position where he can have leverage over his opponent. (Red is where he is, blue is where he should be) As a consequence of being late/not performing a full kickout, Watt is now playing too high against his opponent. His hips are now locked and stiff and no longer has lateral movement positioning. And for the cherry on top of the cake of blasted fundamentals, Watt’s arms are not locked to adjust his position on his defender. This turns into an absolute mess, which results in a Notre Dame incompletion.

Being late causes a domino effect on an offensive lineman’s fundamentals. They lose leverage, don’t have position, and overall blow their assignments.

I love the Watt pick in the third round. Watt is a sound technician at the guard position and filled out a crucial need for the Chargers. He’ll be an immediate upgrade for the Chargers and will have a positive impact as he gains more experience, but because of the aforementioned flaw of being late and his inability to push any defender more than six inches worries me. Whether it be miscommunication or just not being able to keep his head in the game, Watt must fix his biggest flaw of being inconsistent with both timing and reaction. If that flaw and his strength can be fixed, hopefully the Chargers have come away with another steal in the third round.