Three Areas Where Ryan Mathews Can Improve as a Running Back

Mathews is the best ball carrier on this team, but that doesn't mean there isn't room for improvement.

Share All sharing options for: Three Areas Where Ryan Mathews Can Improve as a Running Back

There are three running backs on the roster that the Chargers have signed, drafted, and extended this offseason. Moving forward, none of this appears to be a good sign for Ryan Mathews. Considering head coach Mike McCoy's history dating back to the early 2000's when he was an assistant for the Panthers, the strategy was to acquire a running back, run them into the ground until their contract is up, draft a new back to do the same. Wash. Rinse. Repeat.

Mathews is the best ball carrier on this team, make no mistake about that. What he can do for the running game no one else on the roster can do. We know how powerful of a runner he is, but his balance is incredible. That's why you constantly see him falling forward for extra yards. Combine those two traits with Mathews' straight line speed and his strength, you end up with a very talented back.

However, there are issues. If #24 wants to be a Charger a year from now, he's going to have to fix a few things in his game. Mathews is an above–average running back in this league but has some glaring faults that keep him from being mentioned from the top 10-12 backs in the league. The first one is obvious: his availability. Though he appeared in every game in 2013, Mathews left five games due to injury, and was dinged up all year. That can't happen in 2014 if he wants a new contract in San Diego.

I see three areas where Mathews can still greatly improve:

If he does this, he'll be among the league leader in rushing, instead of being 7th like last year.

This sounds like common sense, but it's something that Mathews has yet to figure out since coming into the league in 2010. I don't just mean "running out of bounds" or "not fighting for the extra yard when nothing's there." I think Mathews can do a much better job at creating yards on his own.

Yes, he gets the 2-3 extra yards after contact. I mean when he's in the hole 1-on-1 with a linebacker, or on the edge and needs to make the safety miss, he just needs to make that guy miss. Mathews has a tendency to just run right into the defender. It's a rarity when he even attempts some sort of move or stiff arm.

There are 3 top tier backs that Ryan can learn from, and they're all his size: Marshawn Lynch, Alfred Morris, and Arian Foster.

Here's an example of Mathews in the hole not taking advantage of an opportunity:

It's a 4 yard gain, but had Mathews done a better job of creating yards on his own, it'd be a big play.

Foster has this move called the "dead leg" which I've long wanted Mathews to adopt as his own. It's simple, and would work in so many situations that Mathews has been put in.

HERE IS ANOTHER EXAMPLE of where Mathews could have set his man up with some sort of move, and instead, he just puts his shoulder down and barrels into the defender. It doesn't have to be anything extreme, either. Morris is the king at this, where he casually side steps defenders.

Being able to evade defenders isn't only important for Mathews to gain more yards, it also prevents defenders from getting a square hit on him. Those are the hits that usually lead to injuries. There's no guarantee Mathews will make the defender miss, but the attempt will at least help to keep him away from the trainer's table.

Mathews improved in this area in 2013, but still has room to grow. When you watch other star backs and the holes that they see, you can see the difference compared to Mathews.

Mathews has a tendency to rush to the line and fall forward. Instead of being patient, letting the play develop, and hit the hole. The phrase "slow to (the hole) fast through (the hole)" is a well–known phrase for describing how a running back should approach the line. It's not something Mathews is comfortable with just yet after four years in the league.

In the above picture, Mathews ran towards the red line for a gain of 2. A little more patience and he sees the gaping hole to his right, and has the safety 1-on-1 in the hole.

There are other times when he bounces plays outside when he doesn't have to. How many yards would you say were left on the field here, 15? 20? 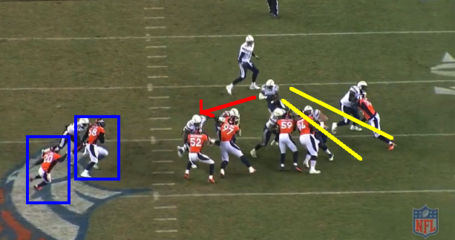 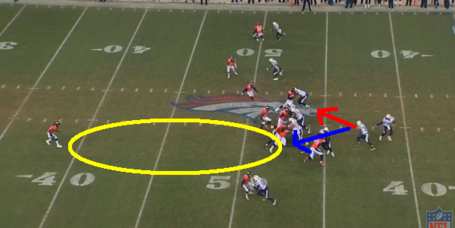 Conversely, Marshawn Lynch's vision is amazing. He sees the field so well, and is very patient behind the line of scrimmage. As this GIF shows, they're not all big plays, but it is the difference between 2-3 yards and 6-8 yards per run.

With Lynch, there are endless examples of him waiting until the very last minute and then boom, he explodes through the hole or cuts it back for a big gain. I'm not asking Mathews to be Lynch, just to take a page out of his book and do a better job of letting the play develop. This will also go a long way to keeping Mathews on the field and off the injury report.

There are a ton of backs that struggle with this. Considering the way San Diego operates, 73.5% of their formations came out of shotgun (per Football Outsiders), Philip Rivers can check to a pass at any time and the back will need to be sound in picking up blitzers. Mathews still isn't where he needs to be. Mathews only blocked 3% of the time, and he still had some missed assignments.

Watch this GIF where Mathews gets tunnel vision. Instead of getting to the center of the formation, where he can see everything that's coming, he sees that his man isn't coming, and goes out for a route. It was a costly play on 3rd down. This happened a few times with him. Ryan needs to do a better job of having his head on a swivel.

Other times, I noticed that Mathews would be flat footed, and just catch the blitzer. He's big and strong enough to be the aggressor. He should be assertive and aggressive in his blocking. He's not, and that's why the staff doesn't trust him.

There's a lot to be excited for when it comes to Mathews. Coming off of a career year, he has plenty to build on. These three traits mentioned above are the things that I'll be looking for to see if he can develop or implement them into his game. Can he avoid unnecessary hits? Can he see the field better? Can he develop as a blocker? All are keys to being a complete running back in today's game.

Last year was Mathews' first year in a zone–heavy scheme. Let's see if he can take the next step in year 2 of this offense. Mathews has the tools, it's just about utilizing them.