Taking a look at the game film from last season to determine who should be the starting Strong Safety for the San Diego Chargers in 2014: Jahleel Addae or Marcus Gilchrist?

As the San Diego Chargers inch closer and closer to training camp, there will be a handful of meaningful battles for significant playing time. I wanted to start with the most interesting one, in my opinion, which is at the safety position.

We know one safety spot is locked down. Last year, Eric Weddle didn't miss a snap. We also know that a year ago the defense was at its best when they were in their "dime" package, which would feature up to four safeties on the field at once on occasion. Was that due to the lack of depth at the cornerback position? We don't know for certain, but my guess would be yes. I'm going to assume that the sub package defense in 2014 will trot out an extra corner before an extra safety, making the battle between Marcus Gilchrist and Jahleel Addae for the starting SS spot even more important.

To get the best feel for each player, I used the last 5 games from last season. In those games, Marcus Gilchrist only came off the field when he was hurt, and Jahleel Addae played on average 80% of the time. There are three areas that I wanted to break down:

Though I may only use one example for each, the following analysis is based off of tendencies I noticed from each player.

Run Defender as a "force" player

There have been reports this offseason that Addae is up over 200 pounds, but it's pretty clear both players were under-sized a year ago. With San Diego playing so much sub package defense last year, we were able to get a good look at Gilchrist as a run defender in the box. San Diego used its safeties as "force" players because of this often last year. Allow #32 to demonstrate. 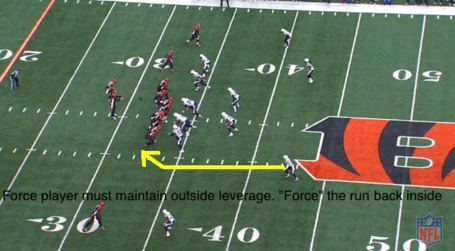 He does this, and just so happens to make the tackle for a 1-yard gain because he's Eric Weddle.

More often than not, Gilchrist or Addae would be closer to the line of scrimmage, and have to maintain their leverage against a tight end or even a pulling offensive lineman.

In this regard, I thought Gilchrist was better than Addae. This is where there strengths and weaknesses are for and against both players. There were instances where Addae would get caught up in the wash, or try to slip the block and not be in a good position to make a play. On the other hand, Gilchrist showed he was patient, and just did his job. He did a good job of keeping his numbers towards the sideline, that way the offense couldn't bounce the run outside of him.

There's nothing sexy about setting the edge or setting up the play for someone else, but it's what I saw from Gilchrist. Here's a good example.

Gilchrist gets blocked, but he does his job and forces the runner to go back to the flow of the defense for a gain of 1. Nothing flashy, but a sound play.

Run defenders as a "fill" Player

This is what made Wedlle an All-Pro. There have been so many times throughout the year where he made a play and I'm scratching my head wondering "How the hell did he just do that?" or just laughing thinking "He has no business being there making that play." As a fill defender you're responsible for the "C" gap. It's your gap, so you're expected to finish the play, and secure the tackle. 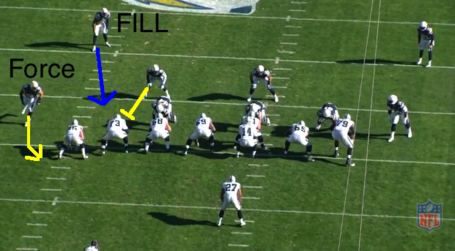 Gilchrist had a tendency to hesitate, and stop his feet on contact when asked to fill. 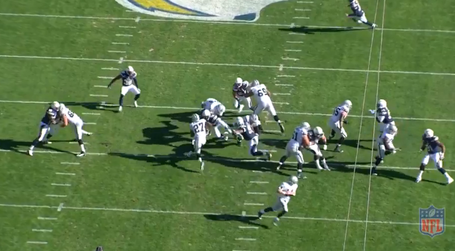 On this particular play, he made the tackle for a gain of 3. But there were instances where he hesitated just enough, where the receiver was able to come and get enough of him to take him out of the play.

Addae was a different story. As a fill defender, he's exactly what you want. He's not going to maneuver his way in a clever manner like Weddle will. Nope. No chance. He's going to run full speed into his gap and hit whatever is in front of him. There were two plays that really stood out to me, both in the divisional playoff game.

Addae's aggressiveness here is the difference between a gain of 0 and a gain of 5 or 6 yards.

There was another play late in the game where his read and react skills were on display.

Addae again avoids the oncoming slot receiver. He could've easily gone with the flow of the play and been blindsided by said receiver. Instead, he instinctually fills his gap and makes the play. Here is a third impressive play of Addae stopping the run.

I would take Addae as the better fill defender and I don't think it's close. When Addae does make a mistake, it's aggressive, and you can't fault that. I also believe that he can diagnose the play faster than Gilchrist.

We all know San Diego runs a heavy zone scheme, and the scheme asks a lot out of its safeties. They have to be able to play that single high, "center field", role as well as be able to guard the slot receiver. In zone coverage, one of the most important traits is for the safety to "find work." Instead of just dropping to your designated zone, have your head on a swivel and make sure you are aware of your surroundings.

Far too often there would be a receiver that Gilchrist would let behind him. He didn't strike me as an aware zone defender, at all. Addae seemed to do a better job of getting the proper depth, as well as being in a better position to consistently make plays on the ball.

When both are covering intermediate to short zones, this is where the gap began to widen. When you're closer to the line of scrimmage you have to be able to recognize and understand route combinations, as well as tackle. It can't be understated out important finishing the play is. Here's an example of how Gilchrist butchered a simple route combination:

As you can see, Melvin Ingram has the receiver in the flat, the corner runs with the receiver on the deep route, leaving the curl route wide open. Gilchrist has no business running with the flat route. He does anyway, making it an easy read for Manning to complete the curl for an easy 1st down. In both playoff games, Gilchrist had a tendency to do this a lot, where he would turn his entire body and get to his "drop", instead of seeing both the quarterback and his man at the same time.

Addae is far from perfect, but he doesn't make these same type of mistakes as Gilchrist does. In the five games I looked at, he never had a true blown coverage that resulted in a reception for the other team. What was more impressive was Addae's understanding of the situation. For example, on a 3rd and 13, he wouldn't fall for the underneath route, would get his appropriate depth, and come and secure the tackle in front of him. Small sample size, but Addae was the better zone defender.

I would categorize both Addae and Gilchrist under "adequate" man-cover safeties. Gilchrist sort of got thrown under the bus by having to guard slot receivers, which isn't his strength. Speaking of, bigger tight ends were able to push off Addae easily to create separation.

Moving forward, I don't believe the Chargers SS will be put in tough man to man situations with Weddle and plenty of depth at CB heading into this season. I wouldn't say that there's a clear cut better man defender between Addae and Gilchrist, but Addae is better at finishing the play and securing the tackle.

I would roll the dice with Addae.

For what the safeties are being asked to do, I believe Addae is your best option. Addae isn't a liability in man coverage, and better yet, won't be put in a position to guard anything but tight ends now that the team has acceptable depth at corner.

Addae is more aware in zone coverage, both moving forward and backwards. He also showed serious value in something that's haunted the Chargers for a couple years now at the safety position: tackling. I had Addae for just one missed tackle in the five games.

With more snaps you saw Addae get more and more comfortable.While he can play more under control, you love to see his aggressive style of play. Barring any preseason injury, he should definitely be the team's choice to take the majority of the snaps opposite Weddle in 2014.