What Does Brandon Flowers Bring to the San Diego Chargers?

Kyle Posey looks at the film and spells it all out, showing us just what the Chargers got in Brandon Flowers, and how much of an upgrade he is to the defense.

Share All sharing options for: What Does Brandon Flowers Bring to the San Diego Chargers?

Yesterday, the San Diego Chargers upgraded their secondary by signing Brandon Flowers to a 1–year deal. Most of the media/Chiefs fans will tell you that Flowers was terrible in 2013. Flowers battled injuries, was in a new scheme, and was asked to play in a new role. From 2008-2012 Flowers primarily played left cornerback in an off–man type scheme. That's where he excelled. Flowers can come into San Diego and pick up right where he left off those years in Kansas City.

I wanted to take a closer look at exactly what San Diego is getting in Flowers. This will be a little bit different from when I broke down Shareece Wright. Instead of going game by game, this time we'll look at how Flowers played against particular routes, when he was in press/off coverage, and against #1 receivers.

You won't be seeing any Targets/Receptions stats here because they are one of the worst stats to gauge a player, in my opinion. For example: Flowers could give up a reception on 3rd and 7, make the tackle for 5 yards, and that's a successful play. The raw numbers don't explain that though; they don't provide context.

In order to make this as simple as possible, you'll see 3 types of plays highlighted in this article:

There was the big adjustment for Flowers in 2013, he was playing in a heavy press man scheme. The prevalent myth is Flowers was constantly beat when he was in press coverage. As you can see, out of a 170–snap sample size, that just isn't true.

What's not mentioned enough is that there is more than one way to play press coverage. You can be lined up in the receiver's face, and not get physical with him. This is called "mirror" man coverage. This is when the corner doesn't initiate 1st contact, and mirrors the receiver at the line of scrimmage. Ironically, the 5'10", 189–pound corner's strength when he pressed was getting physical with the receivers.

An area where the Chargers defense was lacking a year ago was physicality on the outside; that's not a trait that Flowers lacks. Many of my notes while watching Flowers were "loves sticking his nose in the play," "has the aggressiveness you love to see," and "so disruptive when he gets his hands on the receiver."

Brandon Flowers also possesses an awareness that stands out and makes him incredibly valuable compared to what's been on the Chargers roster. I'll get to that more when I talk about Flowers in off coverage, but he does a great job of getting his head around to locate the ball. Here are 2 great examples:

Flowers has a good sense of when to get his head around for the ball (something the recently-departed Derek Cox had a difficult time figuring out).

Flowers' difficulties in press coverage manifested when he was asked to mirror. He's very good when he's the initiator, that's when he causes the disruption. When he's asked to mirror, he has to react, and receivers were able to dictate what happened.

Flowers was also asked to play on an island quite a bit against some of the best athletes in the game. They exposed his lack of deep speed. This isn't really news, as this has always been the case. In 2013 Flowers showed that the only type of receivers that give him issues are the ones that can really run. In his defense, the Chiefs deep safeties were truly awful; think Atari Bigby, maybe worse. They did him no favors and hung him out to dry on more than one occasion.

If being a slot corner is the hardest defensive back position to play, off coverage is the hardest coverage there is. The cornerback has to be patient with the backpedal, while still pacing himself quickly enough in case he needs to turn and run. The cornerback's eyes might be his most important asset, as he needs to be able to read both the quarterback and the receiver simultaneously. All while playing with the proper leverage.

I mentioned how many times I jotted down that Flowers was so aware, and that really showed in off coverage. He does a great job of communicating in zone coverage, calling out crossing routes, and carrying receivers to the edge of zones only to get back to his zone and find work. His interception in the playoffs was a good example of how well Flowers can read the quarterback.

Not only is he instinctive in off coverage, he finishes the play; not finishing plays was a big issue in San Diego.

You can tell he's a great student of the game because there were games where it seemed like he knew what was coming. I could use the majority of his game versus the Bills as an example. This is huge for Jason Verrett and Steve Williams, both players should really benefit from Flowers in the classroom.

Another trait that Flowers brings that San Diego hasn't had since god–knows–when is his sound tackling. It's not a stretch to say he's one of the more sound tacklers in the league at his position. He's willing, aggressive, and wraps up. That sentence doesn't even feel right when talking about Chargers corners. Will he give up some catches? Absolutely. The difference is he will limit any yards–after–catch and will prevent the first down. I love how Flowers fights through blocks and is in constant pursuit of the tackle.

Look at the score, then notice the effort Flowers still gives.

It can't be oversold how much Flowers is built for a scheme like the one defensive coordinator John Pagano employs. Tackling is a very big part of that scheme. Per PFF, Flowers only missed four (!) tackles last season. Tackling in the secondary has been a major issue for the Chargers, Flowers all but eliminates this

This is where we see Flowers' "production" slip. I mentioned how this is the hardest position after quarterback. The receiver has a 2-way go, and often the cornerback has no help either way. I know your 1st instinct is to think Wes Welker, so I'll use him as a my example.

This year Flowers was in primary coverage versus Welker 36 times, and was successful in coverage 28 times, that's a 77% success rate. Welker was able to expose Flowers for both his strengths and his weaknesses at the line of scrimmage. He also showed just how tough it is to play the position.

This is an intermediate crossing route, Flowers does everything humanly possible, and still gives up a crucial 3rd down conversion. Like I said, sometimes you just have to tip your cap.

Look at the placement of this pass. 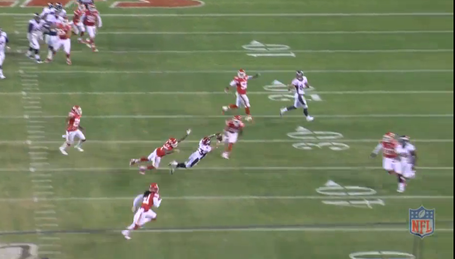 Flowers' quickness at the line of scrimmage isn't on the same level as when he's in off coverage and can read and react. When you're beat initially, you have to overcompensate so much that a nuanced route runner — like Welker, who has so many tricks — can use that against you. The route below is an extreme example, but it helps paint the picture:

One of the better slot receivers in the game, Kendall Wright, got the best of Flowers 6 times. There's a reason Flowers doesn't want to play the slot next year. It's hard, and it doesn't maximize Flowers' skill set. Pagano should just take any "Flowers playing slot idea" he's having and leave it in Kansas City.

Naysayers like to paint the picture as if Flowers got torched left and right. Though this isn't the case, when Flowers did get beat, he got beat badly. The trend I noticed was Flowers would do a very good job in most of his games, but would have 2-3 coverages that were awful. Naturally, those are the ones that stick out to you.

In this GIF where Flowers gives up a touchdown, he does get beat, but I believe that could've easily been prevented by the safety giving him proper support. Now watch this GIF where he gets beat, the same situation where the safety could've prevented the big play had he been in the right position.

I mentioned how impressive Flowers' awareness was. When you're in press man, it limits one of his greatest strengths: his eyes. In off coverage Flowers is able to see the whole play, diagnose it, and finish.

Flowers shadowed Dez Bryant and played press for the most part. It was bad, real bad. Bryant had his way with him, whether it was out–muscling Flowers for the ball, or out–running him, Flowers just couldn't hang athletically. During that game, Flowers had help over the top only three times.

Flowers had similar issues versus Desean Jackson. When isolated on an island, Jackson was just too quick for Flowers to stick with him. My last note from that Eagles game was "not a terrible game from Flowers, but he won't be confused with Darrelle Revis anytime soon."  Flowers is at the bottom of the screen in this GIF, his lack of quickness gets exposed when he doesn't win initially.

In this GIF, Flowers gets out-run by that one Chargers tight end everyone loves. He was never a burner, always a 4.55 guy. San Diego's scheme should protect that.

Flowers success rate against the other team's #1 receiver is 63%. Quite the dip, but I would expect most corners outside of 3 guys to be around this area. The fact that Flowers was able to compete week–in and week–out at the level he did should have fans excited. Flowers never let the big play affect him the rest of the game.

Versus the Entire Route Tree 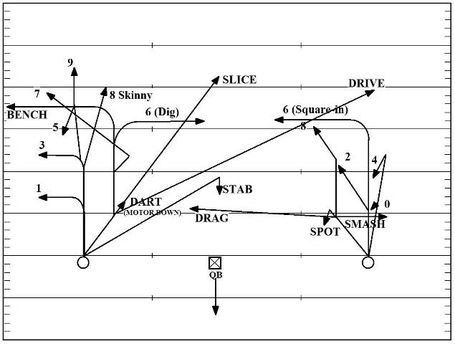 (Whether it's a quick out, or a bench route, it's labeled under "out" )

You can see that the dig/drag both gave Flowers his biggest fits. On the drag, he was beaten right away off the line of scrimmage, and couldn't catch up. On the dig, he had a tendency to open his hips too soon to protect himself from the deep routes. This is what caused the separation.

Considering Flowers had a 3% higher success rate than when I broke down Shareece Wright, while still facing better competition, while shadowing other team's #1 receivers in a scheme that wasn't playing to his strengths should speak volumes to how much of an upgrade Flowers is.

Towards the end of the regular season the Chiefs scrapped the idea of playing Flowers in the slot, that's when you saw the "Flowers of old." That's the Flowers I expect to see.

Did the Chargers sign Richard Sherman? Nope. Did they vastly upgrade their secondary? No adjective or 1-liner would do justice to how much of a yes that is. Flowers isn't just an upgrade, he can be the answer. Let's hope he has shaken any injury issues from a year ago, because if so, the Chargers just signed a top–10 corner in the NFL.