Looking back at the history of Chargers offensive coordinator Frank Reich to predict the changes he might make to the San Diego offense in 2014.

With Frank Reich in his first year as offensive coordinator, I decided to take a look back at the Buffalo playbook from the early 90s, where he was the backup quarterback. Buffalo was known for running a high tempo offense and there Reich developed the reputation of a risk-taking gunslinger. Reich was also on the coaching staff for the Colts from 2008-11 as an offensive assistant and a quarterbacks coach. So, I went back and tried to see if there were any hints at some passing concepts that he could implement in San Diego.

There are 4 "tweaks" in the passing game that I expect Reich to make:

A year ago, San Diego led the league in yards, plays, and time of possession per drive. So coming in and fine-tuning what was already a pretty successful offense doesn't make much sense. What San Diego can, and I believe will, do is speed things up a bit. There isn't a direct correlation between having the ball longer and scoring more points. Denver, Philadelphia, New England, and Dallas were all top 8 teams in terms of points per drive. In terms of time of possession, Dallas was 15th, while the other 3 ranked 23rd, 32nd, and 22nd respectively.
There are many benefits to playing at a faster pace. The main benefit I want to touch on is how much it helps the offensive line. Only 4 teams had more delay of game penalties than the Chargers last year (and one was the Raiders so that doesn't really count.) Only 3 teams had more false start penalties. With all the defensive movement up front in today's NFL, along with the Chargers waiting until late in the play clock to snap the ball, it's easy to see how there were so many pre-snap penalties.
So how does this help the offensive line? Getting to the line of scrimmage and getting the play off 10-15 seconds quicker means that Philip Rivers can check to the proper play while he sees the defense still scrambling around. The quicker pace all but eliminates any delay of game penalties. It also helps when your offensive lineman are not sitting in their stance for 18 seconds waiting for a play to be called. It's a domino effect; the quicker you call the play, the less organized the defense is, the more tired they are from the play before, the more chance you have to execute your block.

Think back to the Peyton Manning Colts when he would get a cheap 5-6 yards just by having the offense set and ready to go before the defense was. I'd much rather see this than to see Rivers frantically clapping as the play clock dwindles down.

Ken Whisenhunt, and Norv Turner before him, ran this concept in San Diego. Whisenhunt not as much, but I believe Reich will bring back this simple, yet effective route combination to the offense as one of the staple downfield routes. You can run this out of a 2 x 1 set, or preferably, a 3 x 1 set. The #2/#3 receiver will run a "flag route" where he runs 10-12 yards vertical, then breaks to the sideline at a 45 degree angle. The #1 receiver usually runs a 5 yard in route, or a curl. Something to hold the corner that way there isn't any interruption with the "flag" route.
Here is one example against the Colts from Week 6 out of a 3x1 set. 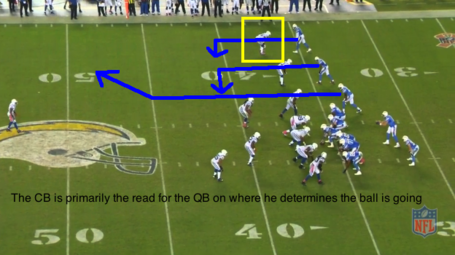 With the single high safety, along with each defender over top a receiver, the Colts tip their hand that it's man coverage. 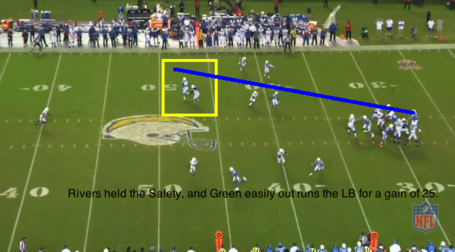 Ladarius Green easily outruns the defender for a big gain.

There are 2 other route combinations you can do with the "smash" route that are effective. One option is to clear out an area by having the outside receiver run a vertical while the receiver running the "flag" route runs to that vacated area.

Here is an example from Week 10 versus Denver. 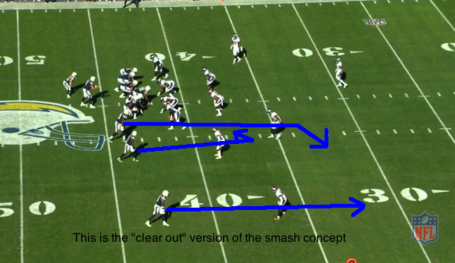 I'm not the biggest fan of this route combination because of the type of receiver Keenan Allen is.

Green has eaten up the same number of yards that Allen has, and is already into his break. The spacing gets kind of wonky when you don't have a real speed receiver on the outside. This was still a reception, because Green towered over the corner and Rivers put it in a beautiful spot, but for the personnel the Chargers have, it's not the best combination.

Here's the wrinkle that I think we can see Reich sprinkle in. Add more of a vertical concept to this, and putting more pressure on the safety. 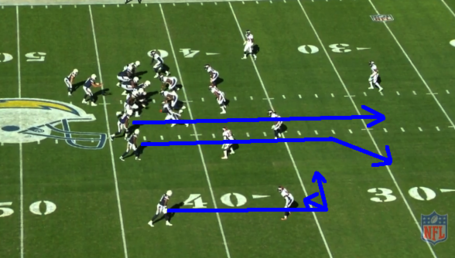 With only 1 deep safety, as teams tended to squat on San Diego's shorter routes and respect their run game, I expect Reich to put safeties in more of a bind in 2014. In the above picture, if the safety holds with the seam route, there's a giant window for Rivers to throw the "flag route." If the safety over-commits to the flag route, you have a chance to throw it out in space and up for grabs to Green in a 1-on-1 situation. If Rivers isn't comfortable with either option, he still has a fallback option underneath to Allen for a free 6 yards as Allen has a ton of space to work with. Just one of the many route tweaks I expect to see this upcoming season.

Last offseason, we wrote about Mike McCoy bringing over the "switch" route and Whisenhunt bringing over the "stack formation." What I expect Reich to bring is less "horizontal" levels, where you're stretching the defense side by side, and more "vertical" levels. This concept alone could lead to less touches for future Hall of Famer Antonio Gates. From about 5 yards and in, Gates is still automatic. It's when he has to get separation after 5 yards that we're seeing him struggle.

Here's an example of the horizontal concept San Diego used last year from the Eagles game. 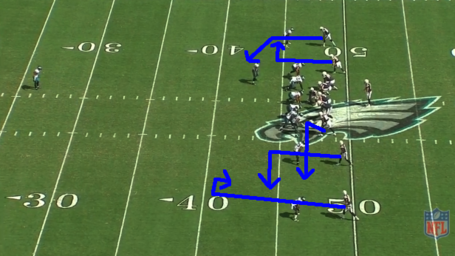 The horizontal levels allow your best underneath receivers the maximum amount of space to work with. In this case, the #3 receiver to the bottom of the screen, Gates. 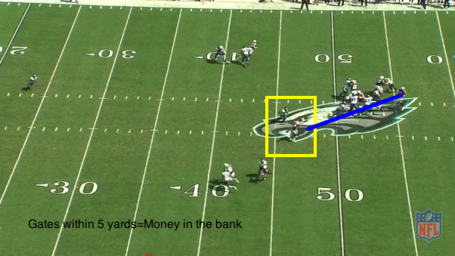 Obviously, I don't think San Diego will morph back into a vertical passing team, but at the same time I can't imagine the Chargers being as horizontal as they were in 2013 again. 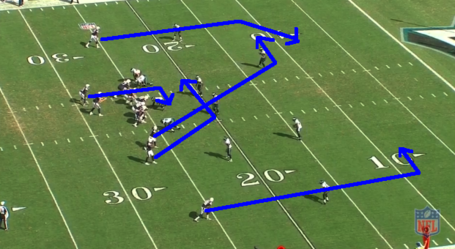 To the top of the screen, Allen runs a post to clear out that area of the field. Both Royal and Gates are in the slot and are supposed to bee-line to the outside shoulder of the safety. The difference being that Gates crosses the field at about 5 yards, and Royal at 15 yards. 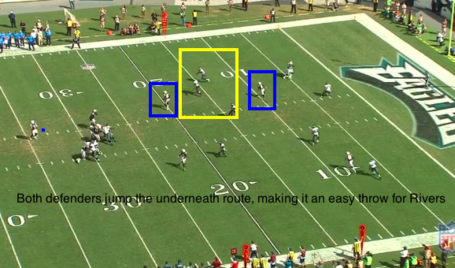 You "hi-lo" the defense while "flooding" a specific area on the field. The difference is instead of putting stress on the underneath zone defender, like the switch route does, you're putting stress on the linebacker/safety that's responsible for the 'hook curl' zone about 10-12 yards down field.

Here's another example of a hi-lo read and why getting Malcom Floyd back healthy is huge. This levels concept is called the "pin" route. 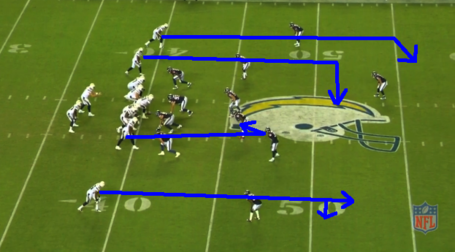 You have your outside receiver running a deep post pattern, and the slot receiver to his side runs a square in route.This should be effective because of the success San Diego had with the intermediate crossing routes a year ago. The idea behind this route combination is to get the safety to jump on the crossing route, and hit the post for a big gain behind him. Floyd is the perfect receiver for this.

The 4 vertical route concept was a big staple of the K-Gun and old school Run and Shoot offenses. The Colts were big on this as well. Here is a successful "4 verticals" route combination San Diego ran in 2013, in the regular season versus the Bengals. 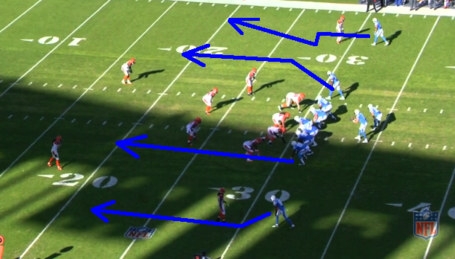 The new twist I'd expect to see this year is something that Reich has long been attached to: more option routes. This year it won't be as simple as 4 receivers strictly running vertical. Football legend, and one of the first to employ the Run and Shoot offense, Glenn Ellison stressed spread formations, vertical spacing, and option/read routes. His biggest thing was that receivers needed to run to the open space and it was up to the quarterback to find them. It's imperative that receivers react quickly and adjust on the fly.

You've probably noticed a trend by now, and that's that the majority of these plays involved Green. That's because these type of adjustments favor Green/Allen heavily over guys like Brown and Gates (who aren't very sudden and are more timing based receivers.) This can have upwards of 3 route adjustments on the fly during one play.

For the outside receivers, they must try to win vertical. If they're unable to beat their man deep, the receiver should be able to gauge this around 10-12 yards, and then stop full speed working directly back to the quarterback.

Here's the adjustments for the perimeter receivers.

Another option is the back shoulder fade. Which is all but impossible for the defender to stop.

The biggest weapon in this route concept is the seam read role. For Buffalo, it was Andre Reed. For Indianapolis, it was Dallas Clark. For the Chargers, it should be Ladarius Green. The "seam read" role and the "Y" receiver are a little different.

The slot receiver to the top of the screen is locked in as a vertical route. There's no adjustment for him. That's the "Y" receiver.

The "seam read" receiver to the bottom of the screen must get inside the linebacker/slot CB lined up over top of him. This is important because he's the hot receiver. In case of a blitz, the quarterback dumps it off to him. This is the reason he turns his head to the quarterback after he clears the 2nd level defenders. Taking this high angle through the safety forces the defenses hand, showing their coverage. It also gives the seam read receiver inside leverage in case he needs to run a post of an in-breaking route if that's what the defense dictates.

Skip ahead to the wildcard playoff game versus the Bengals and we can get a hint at the adjustments that need to be made. 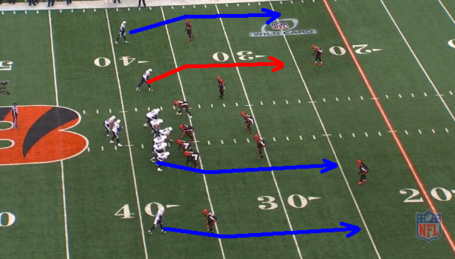 Green is the red line. It's red because in the new offense he'll need to cross the defenders face, and not take an outside release.

A small, yet important adjustment that needs to be made moving forward.

Why Adjustments Need to be Made

San Diego was a good offense. Very efficient, and very productive. Teams now have a year of film and will adjust to what they saw in 2013. There's no reason for them to respect the vertical passing game. Last year Rivers had 587 passing attempts, and per PFF, only 92 of those were on downfield routes. That 6% vertical passing game isn't going to cut it this year. Like anything in life, it's important not to get complacent with success you've had. These 4 tweaks that I'm expecting Reich to make are needed if the offense wants to continue their success in 2014. If they do indeed take the training wheels off Ladarius, and Floyd can stay relatively healthy, the sky is the limit for this offense.