Kyle uses his method to breakdown Keenan Allen's first year with the San Diego Chargers and frame expectations for the next.

Much like Shareece Wright's season and Johnnie Troutman's season, I wanted to take a closer look at the real rookie of the year wide receiver Keenan Allen. What I learned is stats never tell the whole story, so I'll rarely reference those during this.

This was the first route that made me take notice on Keenan. Notice the separation at the top of the route, then he drags his feet at secures the catch perfectly.

The Coming Out Party

Is Speed an Issue?

On the other hand, Blackmon's length seemed to affect Allen a little bit. He had help on the outs, but ran with him easily on deep routes. I think this would be the 1st time you questioned can he get open by pure 'speed.'

If the Colts game was a coming out party, the Washington game was a confirmation that the Monday Night showing was no fluke. This is the game you might recall that Allen was flagged for one of the worst offensive pass interferences I can recall.

The 1st game versus Denver didn't involve a ton of opportunities for the perimeter receivers due to San Diego's 'keep away from Peyton Manning' strategy.

2 big first half misses turned into 2 field goals. The first miss came at the end of the first quarter. San Diego ran the route combination referred to as "smash" to both sides. To the top of the screen it's Vincent Brown and Antonio Gates, and to the bottom of the screen it's Eddie Royal in the slot, with Allen out wide. 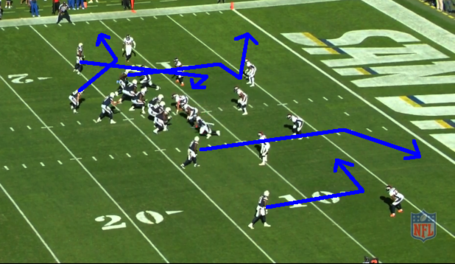 Rivers wanted to go to Brown on the curl route, but there was nowhere to throw. Gates is still in his route so he's not an option. With Troutman almost in his lap, Rivers was forced to leave the pocket and scramble for 3 yards. 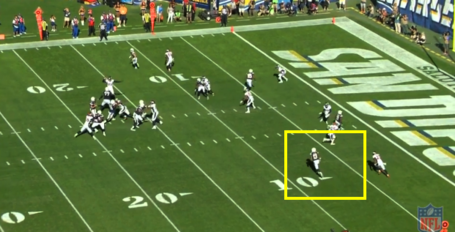 This is right as Rivers realizes Brown is covered, before Gates is into his double move, and prior to Troutman in his lap. El Captain had the opportunity to come off of his inital read across the formation and hit Allen in stride for a definite 1st down & possible touchdown. Even as he scrambled, he had an opportunity to hit Allen for a for sure touchdown. 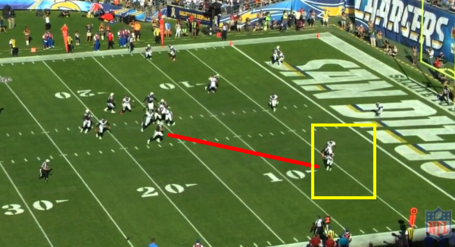 Did this lose the game? Of course not. However, Rivers came up 2 yards short of the 1st down. The next play was 3rd & 2 and Ronnie Brown was stuffed for a 1 yard loss.

The 2nd miss came again when Rivers was under pressure. Rivers dropped his eyes a second too soon, and that's all it took for this 3rd down sack. San Diego has a great call on. Lined up in a stack formation, Allen has the curl over the middle and it opens up beautifully. 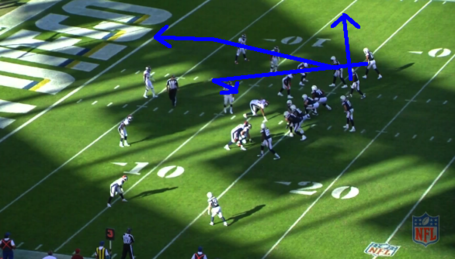 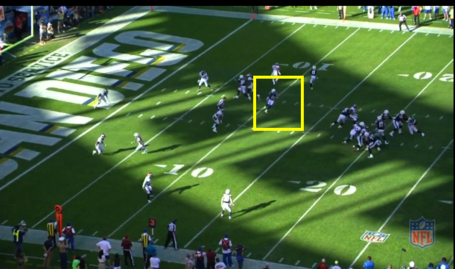 If Rivers anticipates this, it's a 1st down and the drive keeps moving. 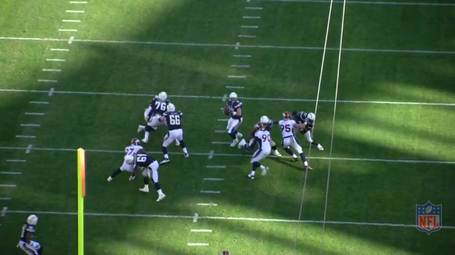 You can see Allen in the bottom left corner. This is when Rivers eye level drops, and the sack happens.

They changed this in the 3rd quarter, as Allen was targeted 4 times on the 1st drive of the 3rd quarter, getting good separation on 3 of those routes. Still, 2 big double teams on 3rd down, one which leading to a sack. I'd say it was his worst game. I can't really speak on mental lapses, because I'm not there, but once Keenan didn't get the rock early, he just sort of checked out. This was also the game he left early with an injury. An all-around off-game for him.

If Miami was Allen's worst game, you could make a strong argument that week 12 was his finest.

While Allen was near perfect in the 1st half, he did cost the team 2 drives where he came up short of the 1st down markers on 3rd down. He ran routes a yard shy of the marker. Can't do that, have to be aware of your surroundings. This next GIF shows you how the difference of waiting 1 second, and how hard being a quarterback really is.

In the 2nd half, KC made obvious adjustments. Whether hitting him early, or doubling Allen, they weren't going to let him beat them. I counted 12 targets in the 1st half. Without question the best half as far as winning 1-on-1. He was open on 10 of the targets (1 was in trail coverage where he was bracketed.) The Chiefs long, lengthy corners on the outside just weren't quick enough at the LOS, or at the top of the route, to guard Allen.

Will the Veteran Secondary Have an Answer?

As you can see, the closer to the line of scrimmage Allen is, the more automatic he is. The dig/out routes don't include the times he was double teamed or when teams rolled coverage towards him. On pure vertical routes, he doesn't have the speed to just run by defenders, and that shows.

Moving forward Allen will need to get more and more creative in his route running if he's going to be the primary intermediate-to-short target. The fact that he was open as often as he was this early in his career should leave no doubts in fans minds that we have a potential star on our hands. Because he's already shown he can make in-game adjustments, it's hard to imagine any kind of "sophomore slump."

I would like to see Allen get better at winning downfield, and cut out some minor mental lapses in his game. I believe Frank Reich's offense will help that, and we'll be previewing that soon. What adjustments would you like to see from Allen moving forward?