Film Study: What Exactly Does Jason Verrett Bring to the Chargers?

We go into Verrett's college tape to see where he fits into the Chargers' defensive scheme and dissect Verrett's fundamentals.

Share All sharing options for: Film Study: What Exactly Does Jason Verrett Bring to the Chargers?

The draft is finished, Jason Verrett is now signed to a four-year deal, and the San Diego Chargers are now ready to begin OTAs and the final leg of the 2014 offseason. I’ve long worked on the draft process and prospects and after Verrett was selected, many asked exactly how Verrett would affect and fit into the Chargers’ defense.

Under John Pagano, the Chargers’ corners have utilized an off-ball, man/zone switch scheme most of the time. To be specific, on the majority of plays, the corner backs are on a seven-by-one alignment (The corners line up seven yards off, one yard inside their respective receivers). The Chargers use this scheme to confuse opposing offenses on whether the defense is in man or zone coverage. You can see an example here:

The Chargers use this alignment about 3/4ths of the time and the other fourth is the typical press lineup. As shown here: 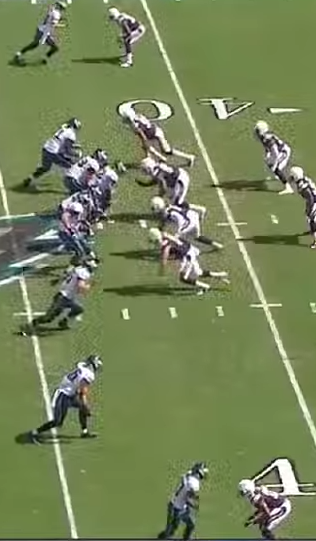 In the first round of the draft, there were four corners that ran this off-ball set in college: Kyle Fuller, Bradley Roby, Justin Gilbert, and Jason Verrett. Out of all these corners, none fit the Chargers’ defensive scheme as well as Jason Verrett. You can see Verrett using both alignments in these two examples (instead of playing seven-off, Verrett played five-off, but so did every other prospect): 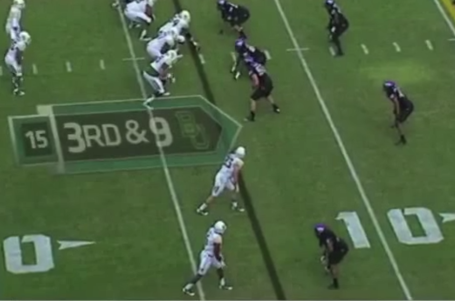 As seen in the examples given, Verrett already has a lot of experience playing in the corner alignment that the Chargers use and will have no issues with adjustment.

With the scheme fit portion out of the way, we begin to look at Verrett’s fundamentals as an off-ball corner back.

There are three things I look for whenever I’m grading a cornerback’s fundamentals: eyes, feet/hips, and hands (I know that’s technically four, bear with me here).

The success of an off-ball corner starts with their eyes at the start of the play. When playing in the press set, a cornerback doesn’t have to use the read-and-react system as much as an off-ball corner does; a press corner’s only responsibility is only their receiver. The first thing you learn when playing off-ball corner is to take your first three backpedals reading the eyes of the quarterback. There are three reason for this.

Feet and hips are especially important in zone coverage, as zone switches happen all the time and changing directions from a receiver exiting your zone to switching to the receiver now entering your zone is all in a corner’s feet and hips.

Hands are important to a cornerback’s success as it does two things:

Here is a look at all three aspects of Verrett’s fundamentals in both run and pass situations.

Here’s the previous shot of Verrett lining up five-off of the receiver:

You can see that Verrett starts out by keeping his eyes on the quarterback to read his keys. He reads to see whether the play is a run or a pass and when he sees the play is a run, he reacts to his key.

Now in this picture, I’ll show the difference between reading the QB and reading his receiver:

Eyes: As you can see, if Verrett is reading his QB as his key, Verrett will react to the run. But the receiver is appearing to run a slant (he’s going to block the second level), and if Verrett reacted to the receiver, he wouldn’t be in position to make the play.

Verrett shows extremely quick feet and hips for change of direction here. You can see him go from backpedal to plant to lining to the running back without any issue. 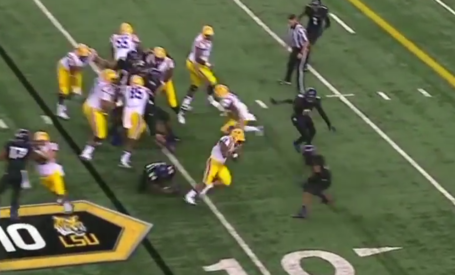 Side Note: Look at that tackling form! The problem I have with players these days is that they’re always looking for the big hits so they lead with the shoulder. Verrett is showing perfect tackling form right here.

You can see the play in live action and his great read and play on the running back.

Obviously, the three step read for a corner is most important in the passing game. The corner must read the quarterback’s eyes to key the pass and react to the QB’s throwing motion. This is especially important when playing zone coverage as timing and location are pivotal in breaking up passes. Verrett shows a very good sense of reading the eyes of a quarterback and reacting accordingly to the throw.

In this play, you can see Verrett playing seven-off, but one-out of the receiver. Still, the fundamentals of an off-ball corner still apply to this situation. Verrett takes his first three steps (in this situation it’s a set hop) reading the eyes of the quarterback. 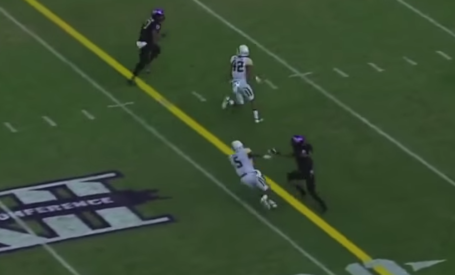 Verrett goes from a stand-still stance, to a full on sprint towards the spot of the ball, all while turning his hips. This shows phenomenal fundamentals in his feet and hips and is what makes him such a great off-ball corner.

You can see Verrett use his hands at the spot of the throw to: a. locate his receiver, b. keep his receiver in check, c. break up the pass at the point of the throw. Once again, great fundamentals.

Here is a gif of the full play in real time.

In the off-ball alignment that the Chargers run, Verrett shows that he is fundamentally good enough to be a perfect fit into the system. He can read and react to both the run and the pass and his eye discipline is great most of the time.

In part two of the analysis of Verrett, I will be discussing where Verrett can improve on his game, where he fits into the zone portion of the Chargers’ defense, other aspects of Verrett’s game, and his transition from college to the pros.