Five San Diego Chargers that need to take the next step

Taking a look at the second and third-year players that the San Diego Chargers need to have breakout seasons if they're to get back to the playoffs next year.

Share All sharing options for: Five San Diego Chargers that need to take the next step

With the NFL Draft over, it's important to temper our expectations for the San Diego Chargers' first-year players. There will be bumps & bruises along the way. It's the nature of the game. Now, what we should expect is second and third-year players to take the next step in their developmental process. Knowing the schedule is quite a bit harder than it was last year, if San Diego wants to have a chance to get into the playoffs again this upcoming year, this group of players must improve and take that next step.

Green was quite the tease last year. It wasn't his fault. The coaching staff just didn't seem to trust him enough to give him "starter" snaps throughout the year. It seemed like Green would make a play early and then disappear for the rest of the game. Not to go on a tangent, but in my opinion, Green outplayed Antonio Gates in the second half of the season. For as much crap as we give Jeromey Clary (rightfully so), Gates just wasn't that good last year (yes, I know he almost had 900 yards receiving). While many will lead you to believe he was being double-teamed, that's simply not the case. The problem was just him not getting open. Even on some of his patented underneath routes, Gates struggled to create separation.

This was a big 3rd down incompletion during a week 13 game against the Bengals. Gates, the yellow square, couldn't create separation. Even with Philip Rivers leading him, he couldn't get to the ball, forcing a field goal. Green is the blue circle, he ran right past the defender, causing the linebacker to be off-balance because he couldn't handle his speed. This is something to get excited for for next season.

But there's work to be done. San Diego is still a running team, and while Green isn't an inferior blocker (like Gates), he can do a much better job at staying on his blocks. In the passing game, many would like Green to play more on the outside. There's no denying his size and speed is his strength, but he's just not a precise route runner at this point. He'll need to do better at coming back to the ball, and getting in and out of his breaks at the top of his route. For now, he just wins with speed, and you can do that between the hashes, where he has the advantage against linebackers and safeties.

Te'o had a rough rookie season. I understand he had the foot injury he was coming off of, but I really couldn't tell in his play. He looked the exact same as he did at Notre Dame. Te'o played in 70% of the snaps in 7 of the 15 games he played in. In those 7 games, the Chargers were 2-5, one of those coming against the Chiefs' B team. Sure, other factors played into the outcome, but there's no question when San Diego went to their "Dime" defense, they were much better as a unit.

Before you attack Cam Thomas or Sean Lissemore, I can't stress enough how important it is to understand that nose tackle wasn't the biggest issue (I'll get to who was). Te'o just has to play better. Period. He's the one player John Pagano moved around in order to put him in a position to succeed (by moving him to the weak inside linebacker position from the strong side), and he didn't take advantage.

These were the same issues Te'o suffered from all season.

Te'o did improve in coverage as the season went on. He played faster in the passing game, and got to his spots in the zone and looked very comfortable and aware doing so. The issue is he came off the field for most obvious passing downs, so this upcoming season Te'o will have to be much, much better against the run. Mainly, he'll need to be more aggressive.

The jack of all trades, yet master of none. Ingram was supposed to be the savior as a pass rusher for San Diego, and while there's no denying the energy that he brought to the defensive side of the ball, it really didn't match up with his production. Yes, he had 2 sacks in 6 games. Both sacks Ingram didn't win initially. The first sack came at just a hair under 4 seconds, and his second sack came at just under 6.5 seconds.

I can't be too hard on Melvin, because he was fresh off an injury, but I'd certainly like to see more as a pass rusher. Ingram's pass rushes consisted of a lot of bull rushing into the offensive tackle with no plan. In over 120 pass rushes, Ingram didn't win off the edge more than a few times. He has to get better if that's the only place he's going to be deployed from. The times he did win, it was off of a stutter move that he sets up so well.

Ideally, we could see Ingram kick inside to defensive tackle and use that initial quickness to beat offensive guards on passing downs. I've seen fans make the argument to replace Jarret Johnson. If you watch Ingram head up versus an offensive lineman or a tight end against the run, you'd no longer feel this way. If Ingram is going to be playing 70-75% of the time, he's going to have to take his game to the next level, and be much more productive on the field.

I'm going to make my case for why Addae should start over Marcus Gilchrist. I'll likely do it in a much longer form, but in short, I saw no reason over the final 5 games why Gilchrist should play over Addae. I want to avoid hyperbolic statements, but I'll say that if there's a young guy on the roster to get excited for, Addae is the guy. In those 5 games when Addae was the deep safety, the whole team allowed ONE reception over 20 yards. Often Addae would just roam the deep middle taking plays away just by being in the right position, other times he would make the hit to jar the ball loose from the defender.

Addae wasn't just limited the the deep safety role. He could come into the box and be just as productive. Whether it be in the passing game as a "robber" over the middle of the field, or outside the hashes taking short throws away. Against the run, Addae showed he can be aggressive, yet savvy at the same time.

Addae can really improve in two areas. In the run game, when Addae is the "force" player in the box, he needs to do a better job of wrapping up and securing the tackle instead of launching himself and leaving his feet. As a deep safety, specifically when Addae has half of the field, he could do a better job of "finding work" or getting more depth. I noticed there were times when he didn't have a threat and was caught in no man's land.

There's a lot to look forward to in Addae's game. I'm excited for his future and hope he continues to get a chance to show his worth. He's extremely important in San Diego's defense based on how they are so multiple with their safeties. He ran a 4.68 40 yard dash (compared to Gilchrist's 4.45), but plays faster and diagnoses quicker than Gilchrist. That was apparent pretty quickly, and is one of the big reasons I'd like to see him get more snaps moving forward. If Addae can take the next step, this will help lessen the blow for a secondary that's expected to have possibly two first-year starters playing the majority of snaps.

I've bashed Te'o and wasn't kind to Ingram, but in a 3-4, everyone has to do their job up front. That didn't happen last year. While Reyes greatly benefited from Sean Lissemore playing nose tackle, he can still stand to become a more consistent player. Is Reyes being used to his greatest strength? No. There were times last year when Reyes was lined up over the center, basically asking him to fail. But at the end of the day, he has to be better.

In Reyes' first full year as the starter, he had some bad tendencies. Instead of holding at the point, like you're supposed to do in a 2-gap system as a defensive end, Reyes played hero ball and would shoot the gaps like every play was a passing down. These are the plays that hang players out to dry. It not only takes yourself out of the running play, but it allows the offensive lineman to work to the next level and clear out the linebackers.

Reyes also has a bad habit of popping straight up, trying to find the ball, and then getting completely washed out of the play.

This is how it starts, and it only gets worse. 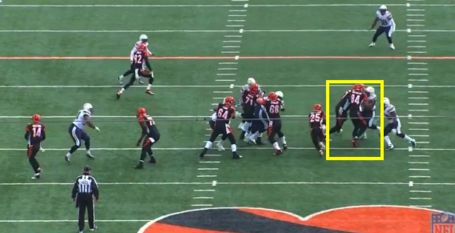 Reyes getting washed out also took Donald Butler out of the play. 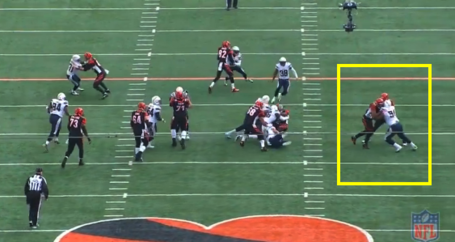 Reyes ends up about 5 yards from where he started.

If he's going to be a full-time player, he's going to have to figure out how to play the run consistently. If not, he's a liability, and will need to revert back to being a sub-package rusher, which was the role he was effective in as a rookie.

Teams were able to game plan for Reyes last year. This year, he's going to have to be the one to adjust. I'd like to see someone challenge Reyes for his spot, whether a veteran or an undrafted rookie, so his play will be held accountable.