With the selection of Chris Watt, did the San Diego Chargers lock down their future at Left Guard ? Jerome Watson thinks they may have.

It's round three and the San Diego Chargers are on the clock. With Josh Huff being taken three slots prior, San Diego was in a prime position to select a player like DT DaQuan Jones or pair Keenan Allen with a talent like WR Donte Moncrief.

Instead, Chargers GM Tom Telesco took all of 45 seconds to select Notre Dame OG Chris Watt. I quickly noticed I had ZERO notes on this kid and immediately asked: "Man, who?"

Well, That "who" ended up wowing me with his performance once I watched his tape and thus, here we are. The Chargers 3rd Round Pick was a fun study. He did so many things well. I left the assessment thinking, "how did I ever miss this cat?" He can really get after it.

Chris Watt was a three-year starter at Notre Dame and played all of his games at Left Guard. Though San Diego currently has a serviceable LG in Chad Rinehart, the position really should be Watt's to lose. He is that good. He is very composed and is deserving of the same "finisher" label one would give UCLA G Xavier Su'a-Filo. He is a mauler when its time to be and is no slouch in pass protection. 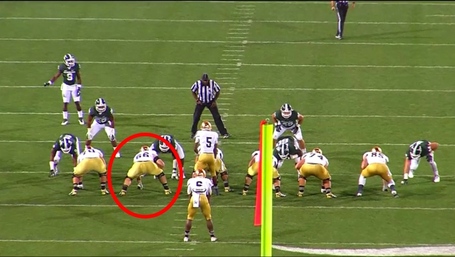 I had little to no issues with Chris Watt's performance from snap to whistle, but I did notice a few irregular things pre-snap. Primarily his starting stance. I illustrated this above. Every other offensive lineman's stance is shoulder width apart. Which is pretty standard. Watt's is rather wide. It didn't change the more I watched him either, but it also didn't matter. He competed confidently and sometimes flat out dominated. This stance was to his advantage, often winning the leverage battle because he was already "lower" than the opposing defensive tackle. 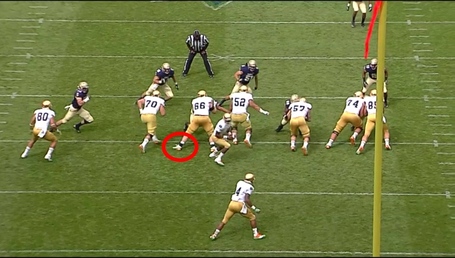 The above image lets you see how deploying out of this wide stance can work against an offensive lineman. There is no real room for error and the plays that weren't so good by him were magnified because of how long it takes to get square from this stance.

It'll be interesting to see if Coach Joe D'alessandris tunes this up and gets him more square than trapezoid. The conversion could hurt because of muscle memory. Conversely, though,  it could be the thing that elevates him from good to very good. Definitely something to keep an eye on in the summer. 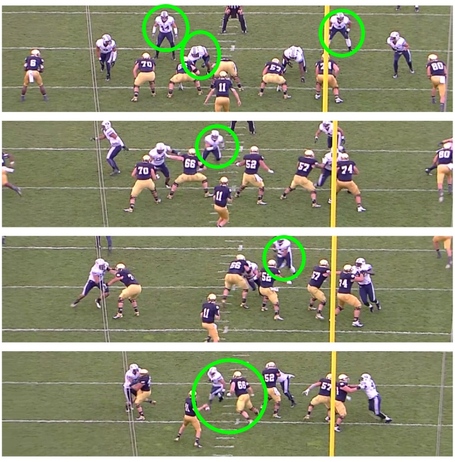 In the image above, you'll notice three defenders highlighted. At the snap, the defensive tackle "covering" Watt shoots the B-Gap and Chris gets a hand on him while keeping two eyes on the linebacker blitzing his the A-Gap. He picks this linebacker up and places him in the center's cross-hairs, never lowering his head and keeping his eyes down field. He then peels off of the linebacker and positions himself to "take a bullet" for the quarterback. Composed and unfazed. Solid stuff.

Chris Watt can multitask with the best of them. He is always checking off Box 2 and 3 on plays. The kid is incredibly football smart. He knows the timing at which certain plays hit and almost always disconnects from double teams at the right time. He gets the concept of the play-call as a whole. He is well prepared when he steps on the field.

Watt can move, too, now. Do not let the proportions fool you. He always "picks up coins" as he works level-to-level. He showed some weight control once he hit full stride, too. It's not easy for linebackers to simply juke Watt and make a play behind him. He can accelerate, throttle down, and square you up at the second level. And when contact is made there, he makes certain that he lets you know how much bigger he is than you. 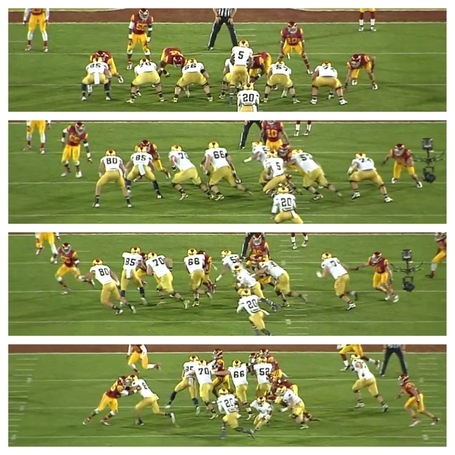 Chris Watt is pretty strong, too. He doesn't just excel in his uncovered work, he can get after a man covering him as well.

Watching his covered work on a staple play in San Diego's run scheme, the Zone Stretch. He gets a nice kick slide at the snap, and squares his assignment up. What I love comes next. Watt gets both paws on the chest plate and knows he has him. He is no longer interested in going lateral, he's already won. He immediately gets north, keeping the 3 technique at bay with the flipper, one arm length from the next man over. The crease you see for the running back started from the work of the Chargers' very own Chris Watt.

On film, Chris Watt looks irritating and I love every bit of it.  He plays all the way through the whistle and you'll always notice defensive lineman readjusting their shoulders pad and jerseys after facing him on plays. He does what it takes. He wears you out. RT D.J. Fluker plays with the same temperament and tenacity; this should be fun to watch.

For what it's worth, I didn't see Chris Watt pull a lot. Or at least, not enough times to give a him a fair assessment on it. Though, I will say he was the primary option to pull on bootlegs and did his job in patrolling the naked area. This is something else to keep an eye on during camp.

Can Chris Watt can be versatile? Yes. Technically, If you can play and perform well at Left Guard, you should be able to do the same on the other side. And with him making the checks for Notre Dame, he can probably kick inside and play some center. But neither of these scenarios do I see happening. To me, Chris Watt is San Diego's LG of the future.

Telesco got his second building block.