Is Jeremiah Attaochu a potential replacement for Melvin Ingram?

Could San Diego be impatient with Melvin Ingram's progress in the "Jack" role? Jerome Watson takes a look at what Attaochu could bring to San Diego's 3-4 defense.

Share All sharing options for: Is Jeremiah Attaochu a potential replacement for Melvin Ingram?

The San Diego Chargers moved up in the draft and selected Georgia Tech OLB Jeremiah Attaochu with their second round pick.

Jeremiah was a highly effective player in college (noticing a trend yet?), notching a career total of 31.5 sacks. The 21 year old linebacker played in the 3-4 defense for three years under Al Groh and notched 19 sacks in his role as an OLB. In his senior year, he played a lot more with his hand in the ground as Tech switched to 4-3 base defense. This didn't halt his production though. He went on to post 12.5 sacks this past campaign.

I went to the tape to see why San Diego decided to hand over a fourth round pick and came away with some good things and some not-so-good things. 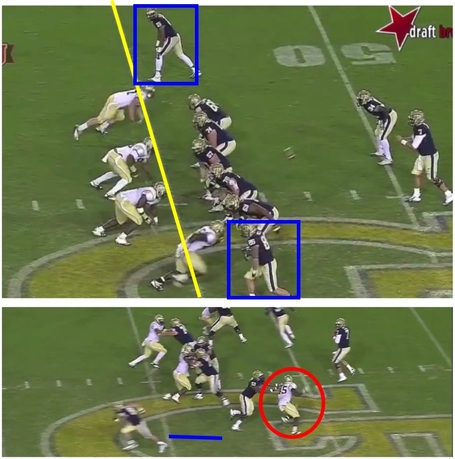 First, he knows the scheme, he knows the Jack position. This is different from the likes of converting a Melvin Ingram or Larry English into the role.

Secondly, Jeremiah Attaochu is fast. Real fast. He is a torpedo and his first step is as explosive as it gets. I used the example above to illustrate this. The players split out haven't even left their stance yet and Attaochu already has a 1 yard head start up-field. He is the only one moving! The TE progresses two yards (46 yd line to 44 yd line) and Jeremiah is closing in on the 50 (deployed from the 45). That's +4 yards on every player in that box. 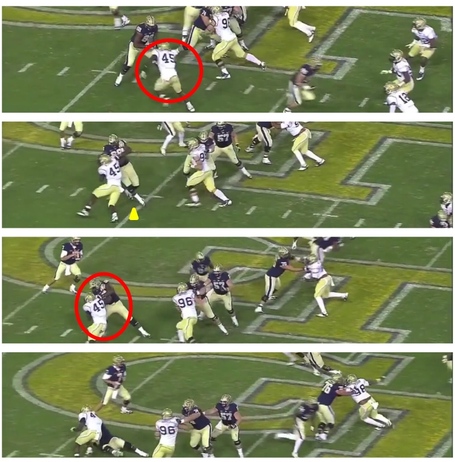 Another thing I noticed about Attaochu was his conditioning. I'm usually weary of outside linebackers who lean so heavily on speed because of the "wind" factor. But he is different in terms of this. He is just as fast in the fourth quarter as he was in the second quarter.

His speed is overwhelming and I noticed he has a feel for when the tackle is getting tired. This is usually when he kicks the straight arm bull rush in (above).

In my assessment, I didn't see him stunt much and when I did, I didn't like what I saw. I feel like using him on stunts gives the tackle the break, gives them a breather. Jeremiah is well conditioned, has unlimited "A Button" and this should be used off of the edge over and over again. Plus, with an explosive step like his, you want that going towards the quarterback not parallel to the line of scrimmage.

Attaochu's talents allow defensive coordinators to set things up for other guys. Opposing O-lineman know they're dealing with real speed, so looping him around and crashing someone underneath the tackle is something Chargers DC John Pagano should explore.

I see San Diego using him in a package like this: 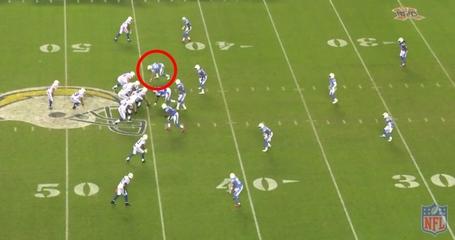 Or in a wide alignment as such: 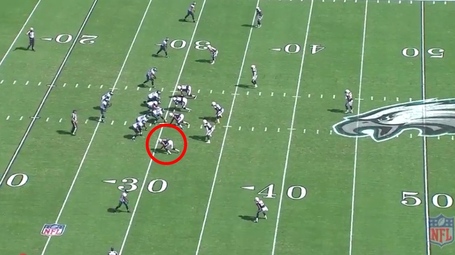 There are some serious downers to his technical game, though. Jeremiah Attaochu comes to the fight with only one batarang on his utility belt, the dip move. The spin move he uses is beyond comical. He can leave that at home on Sundays.

He will not be anything more than a "Jack" backer and just can't be held responsible for setting the edge as a Sam. It's too easy for Tight Ends.

The pick is bittersweet because he can really get after the quarterback and San Diego obviously increased their team speed. But Tom Telesco gave up a fourth round pick in a crazy deep draft and the pick indicates John Pagano's aging, 2-gap scheme will remain in Mission Valley.