Each year, the San Diego Chargers hold open tryouts when searching for new cheerleaders. Get to know a few "Charger Girl" hopefuls from the first round of auditions.

Over 300 girls arrived at the University of San Diego's Jenny Craig Pavilion Sunday to compete for only 28 open spots on the Charger Girls team.

After stretching and warming up, the girls gathered on the gym floor to learn a complex dance routine later performed in front of a judges' panel. Less than 200 were chosen to stay for a second round and perform another choreographed dance. From there, the judges chose just 71 girls to move on to the final stages of auditions this week, where they will be interviewed and showcase a dance they personally choreograph.

It's not only the newbie hopefuls who have to go through the audition process - even veteran Charger Girls are required to audition for the team again; meaning your favorite Charger Girl from last season may not be featured in the 2014-15 calendar.

The 2014-15 Charger Girl roster will be officially announced by the end of this week, after Thursday's final round.

In addition to attending every home game and mandatory practice twice a week, each girl who makes the team is required to participate at community events throughout the season.

We caught up with a few girls to ask them about the most memorable community contributions they've made - or hopefully, will make - with the team, plus some other questions. 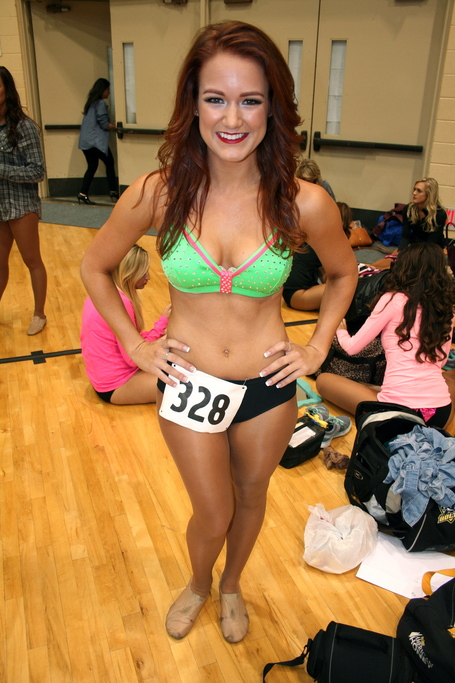 Where are you from?
Corona, CA, so not too far away.

If you make the Charger Girls, what off-the-field events are you looking forward to the most?
My number one would be the school visits and getting together with the kids. I love kids!

If you could be any cartoon character, who would it be?
Being a redhead, I would be the Little Mermaid. I have that fun, bubbly personality and I'm really social and really outgoing so I think I would fit that character. I've always wanted to be her! 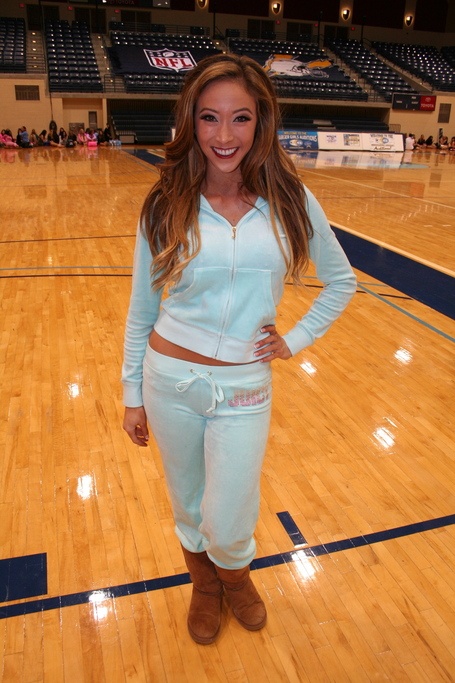 Where are you from?
San Diego, CA

How long have you been a Charger Girl?
I'm trying out for my fourth season.

How long have you been a Chargers fan?
I've been a lifelong Chargers fan, because I'm from San Diego, so I grew up watching the Chargers. I remember them going to the Super Bowl in '94.

What's the most memorable community contribution you've made with the Charger Girls?
This year was really special for us because we were really involved with the military. I organized a letter collection drive through Operation Gratitude on behalf of our team. The girls wrote letters to soldiers or guys deployed, and we sent it off to Operation Gratitude who sent it to deployed troops. It really meant a lot to us. Our calendar was military-themed.

What is your favorite thing about San Diego?
That's a really hard one because there are a lot of nice things about San Diego. Every time I have friends come visit me, I can't even pick one thing to go and show them. But I would probably say Balboa Park - it's got a lot of history to it, it's a beautiful place to be - you can take families there, you can take pets there. On a really nice day, it's just nice to walk around to enjoy it with your friends and loved ones.

If you could be any cartoon character, who would it be?
Rugrats. When I was a kid, I always wanted to be on the Rugrats and go on these fun adventures that Tommy, Pickles and his friends would go on!

How long have you been a Charger Girl?
I just completed my rookie season. I'm auditioning for my sophomore season.

What's the most memorable community contribution you've made with the Charger Girls?
Selling calendars to raise money for the Wounded Warrior Project. I had a friend pass away in Afghanistan, so I felt like I was doing my part. It really touched my heart to be able to help other people's families and give in that special way that usually people don't get to.

What's your favorite thing about San Diego?
I love the beach! I live like two blocks from the beach, and I can just walk to the beach and lay on the sand and read a book. It's amazing.

If you could be any cartoon character, who would it be?
Jessica Rabbit. She's so hot.

Do you have a favorite taco shop in San Diego?
Alberto's in Pacific Beach.