A look at how players develop by position during their first four years after they are drafted based upon the 2008-2010 draft classes.

Share All sharing options for: Drafted Player Development by Position

As we slowly approach the draft, I have read many comments and articles suggesting (pretty persuasively) that certain positions need a development curve (e.g. CB, WR) while others can have players have an immediate impact. To help provide some insight, I have organized the Pro Football Focus (PFF) data, once again, to look for patterns. The methodology is shown here. I focused on 2008+ for two reasons. First, the PFF data only goes back to 2007. Second, in 2008 the classification of the positions that the players were being drafted for got much cleaner (at least in the Pro Football Reference and ESPN, my draft data sources) 2008+.

The data you will see is organized by years after the draft. I wanted four years of playing data, so this takes 2008, 2009 and 2010 and looks at years 1-4 for each class. So "Y1" is the aggregation of the first year of playing for the draft classes of 2008-10, "Y2" is the aggregated 2nd year after their draft and so on. I also split the draft classes into "hits" and "misses", using my methodology from an earlier article. To be a "hit" you must have get on the field and have a decent PFF score, yielding about 25% of the draft class as a "hit" (Hit, going forward). If a player fails either criteria, they are categorized as a "miss" (Miss, going forward).

So, first, do players get better from Y1-Y4? The chart below, aggregated for all positions, suggests that they do. 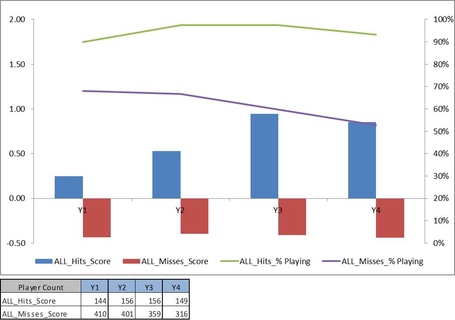 To explain the chart, the blue and red columns are average PFF score (normalized by standard deviations above the mean) for the players, split into the hits and misses (left axis). The lines are the percentage of players (e.g. % of Hits) that played in that year (right axis). So in Y1, roughly 90% of the Hits made it onto the field in their first year, increasing to nearly 100% in their Y2. The Misses start at 70% getting playing time in Y1 and gradually declining to a little over 50% getting playing time by their Y4.

The above chart suggests that the Hits get progressively better Y1-Y3 (and most are playing), then plateau a bit in Y4. The Misses have mediocre scores that do not change and the portion of the Misses that are getting on the field is gradually declining. The chart to the lower left shows the number of players, both Hits and Misses that played in their years 1-4.

The chart below suggests that there is some variation by position, especially the running backs.

A couple of positions I have read that people think take some development time are WR and CB's. For WR's, this appears very true for the Hits, starting off low and progressively building each year. The Misses stay mediocre and their ability to get playing time gradually declines. 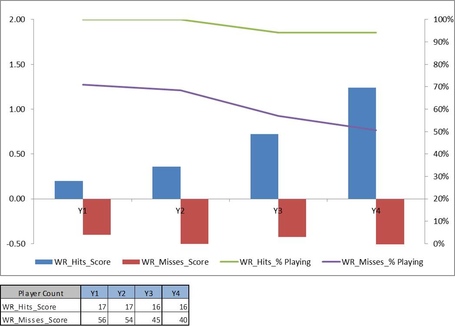 The CB Hits seem to have a year of adjustment but then get up to speed by Y2, while the Misses, like the WR Misses, stay mediocre and gradually lose their playing time. 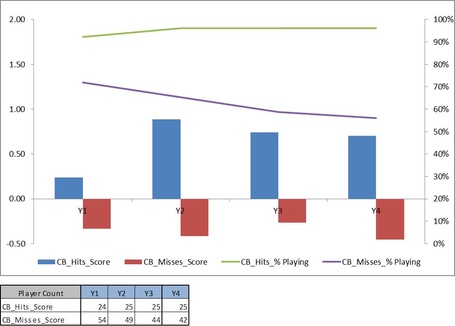 However, the data suggests that most positions need 1-2 years to develop for the Hits, while 50-70% of the Misses get on the field, their scores stay low and the portion of the Misses getting on the field gradually declines. The next few charts show Hits for the positions grouped by type. Most follow the general pattern shown in aggregate. 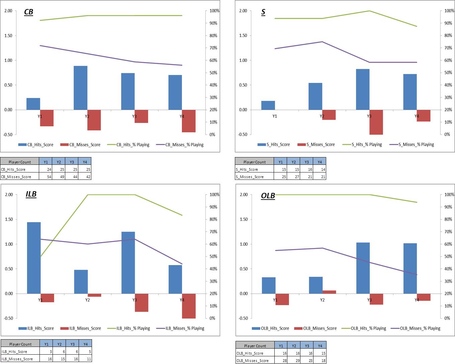 Shown above are CB (upper left), S (upper right), ILB (lower left) and OLB (lower right). Except for the ILB, the groups look generally similar. The Hits contributed modestly their first year of playing and then improved their play Y2-Y4. CB's seemed to plateau but otherwise the Hits seem to follow a similar development path. So do the Misses. Again skipping the ILB, the Hits are better than the Misses in Y1 but the gap really widens in successive years. The portion of Misses getting on the field gradually declines and the average score of those still playing is a consistent mediocrity.

The ILB chart looks very different but here the number of players is pretty small, making the data very vulnerable to particular player performance. The number of ILB drafted and is much lower than the other positions.

The final two defensive groups are shown above: DE and DT. Both the Hits and Misses seem pretty consistent across the positions though the DE grow more steadily while the DT Hits seem to take a big step forward in Y3. The Misses are about thw same. though the DT misses seem to be able to keep getting on the field longer than the DE. 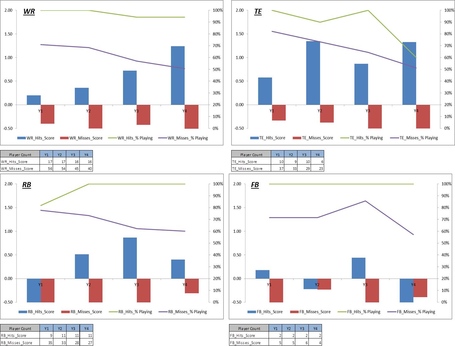 Shown above are the receiving corp and backfield. The WR have been discussed above, looking like the positions where Hits take the longest time to evolve. The WR Misses stay mediocre and gradually cannot get onto the field. TE Hits look very similar to WR except for jump in Y3, but dealing with fewer players (10 vs. 16), so Y3 may be more due to player variation than a development pattern. The TE Misses look nearly identical to WR Misses.

The RB Hits show a very interesting pattern. In Y1, Hits and Misses look nearly identical, neither really getting good scores and equal portion getting playing time. But in Y2-Y4 the groups seperate sharply, as the Hits all play and Misses start not getting onto the field and their score stays similar to their disappointing first year. There were very few FB, so hard to draw useful conclusions. 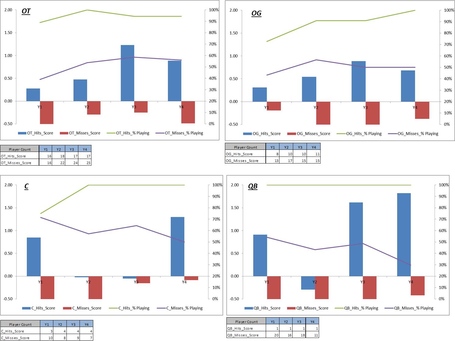 Shown above is the OL and QB position. The OT and OG positions also look very similar, both Hits and Misses. The Hits start positively and then continue to develop. The Misses have lower average scores but the most telling difference in Y1 is that a much lower portion of the Misses get on the field. The C have thin data so not going to discuss them.

The final position is the QB. This is probably the most controversial from a PFF data quality standpoint. By my methods, there was one Hit in the three draft classes out of 21 drafted. That is Matt Ryan. In the Misses include Joe Flacco, Matt Stafford and Sam Bradford. I do think Ryan is the best out of that group, but calling Flacco a Miss seems wrong. His PFF scores are generally pretty poor, thus his being grouped with the Misses.

So, the next step, coming in a follow up article is to look at recent Charger draftees to see how well their scores match development curves (Mathews is amazingly similar to the RB Hit charts) or perhaps help us foretell their development path. How does Allen's rookie WR year look (amazing) in this context or T'eo's (troubling)?