2007 San Diego Chargers: The Greatest Backfield of All Time

The 2007 season is often remembered by San Diego Chargers fans for what could have been. Easily forgotten is that it featured the greatest backfield combination of all time.

Share All sharing options for: 2007 San Diego Chargers: The Greatest Backfield of All Time

The NFL Draft is exactly 21 days from today. Every time I see the number 21, whether it's at work, at the grocery store, you name it, I think of Ladainian Tomlinson. Tomlinson was one of, if not the greatest running back of my generation (I'm 27 years old). That being said, I still feel like he doesn't get the credit he deserves, for various reasons. That's a discussion for a different day, though.

Today, let's reflect back on something that perhaps we as fans took for granted at the time.

Chargers backfield that had LDT, Michael Turner, Darren Sproles and Lorenzo Neal at FB had to be the best of all time right?

To answer the question, yes. The 2007 San Diego Chargers had the greatest backfield of all time.

Lorenzo "Low Daddy" Neal was the best. All he did was block for 11 1,000-yard rushers. I mean, come on, guys like Adrien Murrell ran for 1,000 yards behind him. If that's not enough, Le'Ron freaking McClain rushed for 907 yards behind Neal in 2008. The neck roll put defenders on their back routinely. 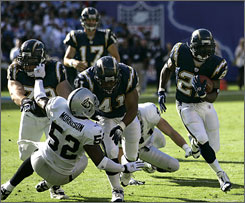 Though the game has evolved away from the fullback position, there's still a place in today's NFL for a guy like Neal.

Small, yet strong and explosive. It's clear the Chargers had no clue what they had in the young Darren Sproles. Sproles was the primary kick & punt returner in 2007. Sproles was mainly an afterthought on offense, and had been only okay on special teams. Then came that Monday Night game against the Colts. It's impossible to forget. All he did was take both a punt & kickoff back for a touchdown.

Sproles made the most of his opportunities in 2007. Against Detroit in week 15, he finished with 122 yards and a pair of touchdowns. Not too shabby for a 3rd string running back. You have to wonder how things would have been different in 2013-14 with the innovations of today's game? How much more could Sproles have been, even with a crowded backfield? All Sproles has gone on to do with his career is break the single season record for all-purpose yards.

Speaking of taking advantage of your opportunity, Michael Turner did just that. He parlayed a 71 carry season into a 6 year, $34.5 million contract. It didn't take a 10 year scout to watch Turner play and easily see he was going to be a workhorse back. The more Turner touched the ball, the better he got. Unlike many 230 pound backs, Turner was fast. He could really move. The run against the Colts in the playoffs, and the run against Denver in the regular season, always stuck with me.

The only question fans had was would Turner be a workhorse for San Diego, or for another team? In hindsight, you can obviously make a strong argument that the team should have retained Turner, who had very few miles on those tires at the time, and let Tomlinson, who was coming off of an injury, walk. Our own Patrick Green has always said the Spanos family has been loyal to a fault.

Unfortunately, 2007 will be the year Tomlinson is forever remembered for sitting on the bench in the playoffs with that black visor and a big coat over him against the Patriots in the playoffs. What it should be remembered as is a year where Tomlinson had 1,949 yards from scrimmage to go along with 18 total touchdowns. Here's a look at some of his highlights from that season (the song is very fitting).

Tomlinson's ability in the open field was ridiculous. He could make the best defenders look silly. We knew he was fast, but it was still amazing to see him out-run angles and blow past people. I don't think Tomlinson gets enough credit for how strong he was. Constantly breaking tackles and bouncing off defenders, he also had one of the absolute best stiff arms I can remember. He was a really special back to watch.

2007 was probably the last true great season by Tomlinson's standards. I still hate the fact that he wasn't able to play in that playoff game against the Patriots. The Chargers were only able to muster 4 field goals (3 coming within the 10 yard line). While Turner was good, no one had a nose for the end zone like Tomlinson. You can't convince me that if he's healthy he doesn't score at least one time.

For a team without a Super Bowl victory, seasons are often remembered only for what could have been, and what opportunity was missed. 2007 should be remembered for what it was, because it was truly special.