What do the results from 2008-13 drafts say about the Chargers' draft position and the odds of finding impact players at positions of need? This cut looks closely at defensive positions drafted.

Share All sharing options for: Review of Draft Order and Value by Position with an Eye on Defense

The idea of this article is pretty simple: look to see what kind of value teams have received by their draft slot and see what, if any, implications this has for the Chargers. The Chargers have the #25 slot in the first round, so looking at the results of the 22-32 picks might give some idea of what our odds are for finding an impact player in the first round. Here is a quick view by position, what the results of recent drafts look like in success rate (good player / total players drafted). 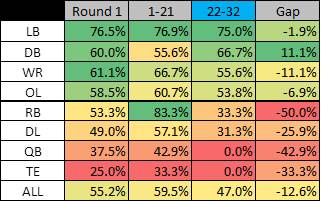 A detail view of DB may help illustrate how these numbers are calculated. Green 1's are "hits" and red 0's are "miss". 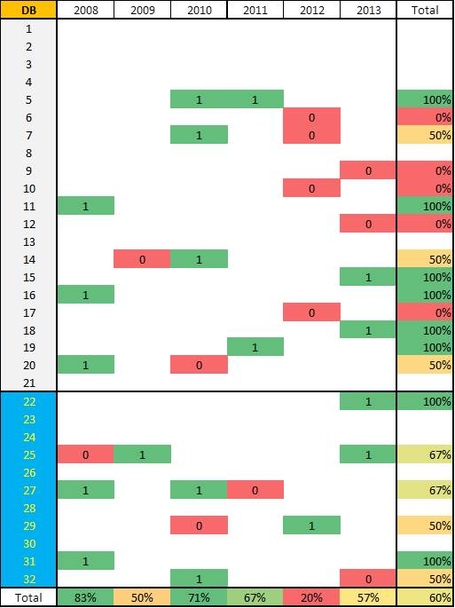 So a few things. First, how is a "Hit" defined? I will try to keep the details succinct, but this uses my ProFootballFocus (PFF)-based metrics which translates their PFF score into standard deviations above or below the mean for that position for that year. Criteria for a "hit":
That may not sound too exacting, but almost half the players drafted fail the snap threshold, and then another 50% of the surviving population are eliminated due to bad playing scores. So this methodology yields the top 25% of the players drafted. As a reality check, here are the list of the all Chargers and whether they were a "hit" or "miss": 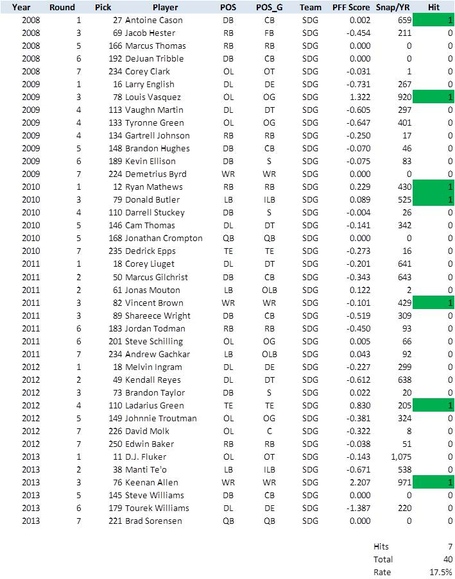 A few observations jump out. First, some of the more recent players (Fluker, T'eo) are young so they can clearly develop, and may change from "miss" to "hit". Second, PFF scores are not universally embraced. DJ Fluker has generally poor PFF grades, though he sure does not seem like a "miss". But no system will be perfect. Third, regardless of the method, 17.5% seems like a bad "hit" rate, given the overall rate is 25% for these metrics. It is. Below is the summary by team by round. At least we have JAX to laugh at: 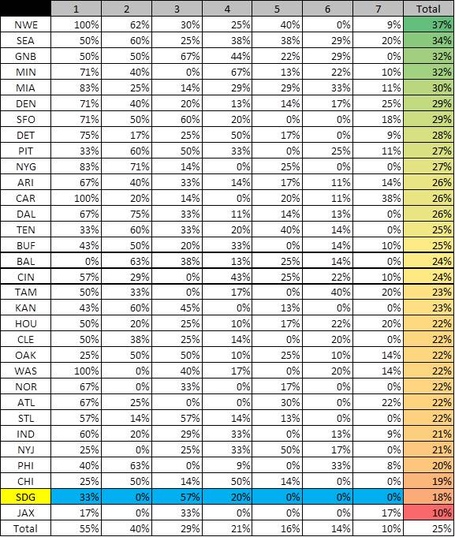 Not all the teams at the top of this list are dominating teams, but some casual beliefs (e.g. New England drafts well) seem to be born out.
So, what do the odds look like for SD to bolster their defense? The realities of BPA reality and sanity will lead to offensive players being selected, but am focusing on the defense, especially given the paltry moves made during the current free agency period (I think Ghee will be nice surprise and be good, the anti-Cox).
First, the likelihood of a good player from a pick drops from 1-99, but not as steeply as I would have guessed:

So, looking past the first round, the data (with lots of caveats given 6 years of data) suggests that LB yields are higher in the earlier rounds and some bottom fishing in the later rounds for DB's has had better recent sucess than the other positions. DL are similar to the DB's. 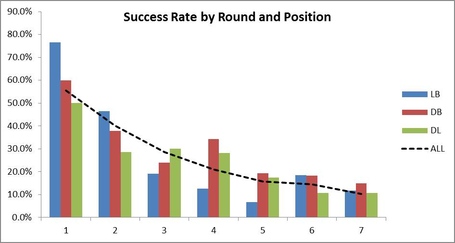 There are myriad limitations in the data but the biggest is probably adjusting for the position quality for years. DB's lurking in the 4th and 5th rounds may be a function of the quality in particular years. To get a handle on this, we can look at the success rate by round by year, to eyeball whether a round's success seems driven by a few particular years. 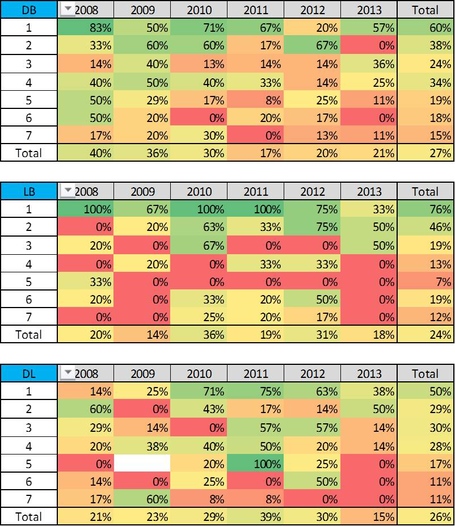 I focus on the Total row, looking for high or low variance by year. DB's definitely have a higher rate in 2008-2010 than in recent years, but this could be function of the time it takes for a DB to mature. Perhaps it takes longer, so would expect to see more of a draft class begin to succeed over time. A look at the variance (over six years) by position suggests that QB's and OL have boom or bust years, while WR are fairly stable. 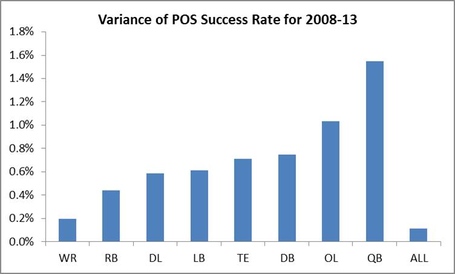 So in conclusion the prospects for San Diego getting some defensive prospects in the draft seem decent. There seems to be a bias towards LB's in the earlier rounds but San Diego has a decent chance of snagging 1-2 defensive contributors in the draft.