LaDainian Tomlinson teams with innovative TangoTab to provide hunger relief locally. BFTB was at their event in downtown San Diego on Wednesday to find out how they were doing it.

LaDainian Tomlinson continues to put up W’s in San Diego.

Tomlinson had his game face on Wednesday evening at downtown sports bar and restaurant Bub’s @ the Ballpark, but what he was doing was not sports related. The former MVP and future hall-of-famer talked about fighting to end hunger locally, how using a new free app called TangoTab would help do that, and be a win for the community.

TangoTab’s mission is simple: "When you eat, they eat."

About 1 in 6 Americans suffer from hunger, and in some places, 1 in 4 children go to bed hungry every day.

The TangoTab app is free to download (available on Android and iPhone) and provides its users with special deals at local restaurants. Every time a deal is redeemed, TangoTab works with its non-profit partners to make sure someone in need gets a meal. One such partner is the Jacobs and Cushman San Diego Food Bank. 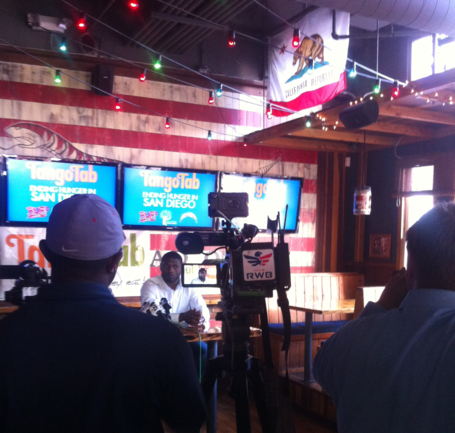 Tomlinson said he was downtown to "bring awareness to TangoTab because [he believes] in it so much."

Working to end hunger has been a longtime passion for Tomlinson. During his days in a Charger uniform, he gave out at least 2,100 Thanksgiving dinners every year to less fortunate families through his Give Thanks with L.T. program.

Since its start in 2012, TangoTab and its diners have fed over 430,000 people and the numbers are rapidly growing. Founder and CEO Andre Angel, who also attended the TangoTab launch alongside Tomlinson, said, "What we created is a win-win-win model, where the restaurant wins new clients, the consumer wins great offers, and somebody in need also eats. Wherever consumers eat, we’re donating locally in that community. We want to solve the problem here at home."

"I felt like when Andre came with this opportunity to launch this TangoTab app here in San Diego, I felt like it was a great opportunity for everyone because this is something the community can be involved with," Tomlinson said.

The community involvement between restaurant customers and eateries that offer TangoTab deals is what makes the app innovative. TangoTab users get good deals on food, restaurants increase traffic, and both get to be philanthropic in the process. They call it a "recipe for sustainable business success."

Angel said TangoTab would be effective in San Diego because of "L.T. and his love of the city." 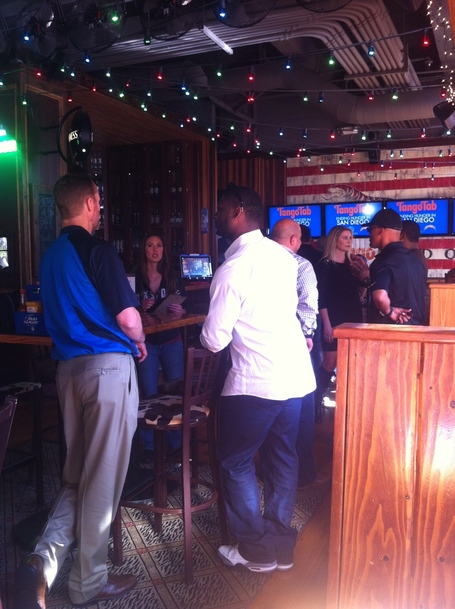 Tomlinson has been a fixture in the local community even after his retirement. He seemed to voice disappointment that no one has taken over his Give Thanks with L.T. program since he stopped playing for the Bolts. Perhaps that void is partly why he is back carrying on his efforts to give hunger relief here.

"San Diego was my professional home," Tomlinson reminisced. "I became a man in this community" and "I always wanted to continue feeding people in this community." The sincerity in his voice was as genuine as his lightning-quick cuts on the field. But instead of filling up stat sheets, Tomlinson’s passion now lies in filling plates, bowls, and empty stomachs.

(This article was about the press conference, which happened in the afternoon. Christina will have a post up shortly about the celebration, which came a few hours later.)

Join L.T. in ending hunger by downloading the TangoTab app from the App Store on iTunes, Android Apps on Google Play, and www.tangotab.com.