Breaking Down New Bolts is back with game film breakdowns of new free agents signed by the San Diego Chargers. The first player up is the premium signing so far of the offseason, Donald Brown.

Fans of the San Diego Chargers nearly went the entire first day of free agency without a signing. Luckily, Tom Telesco came through with a player that will be able to immediately contribute. Running back Donald Brown signed a 3 year, $10 million contract Tuesday evening, replacing Ronnie Brown in the 3-way tandem with Ryan Mathews and Danny Woodhead in the backfield last season.

Replacing may not be the right word though, as that implies that he brings the same skill set that Ronnie Brown had. This is not true. Let's go through the main areas of focus for a running back, with pretty pictures as necessary.

Brown is an adequate receiver, nothing more. He isn't a dynamic passing threat like Woodhead, and the Colts didn't design plays often around him catching the ball. Most of his receptions are when Andrew Luck couldn't find an open man and simply checked down to him.

When he gets the ball in the open field, he does just fine with it, and gain productive yards. But his route running isn't anything to write home about, which is probably why plays weren't designed around him in the passing game. A quarterback needs to know where and when the player will precisely be, and Brown's route running isn't crisp enough for that.

Let's just get this out of the way now.

Now that we have that cleared up, let's talk about how he blocked last season, and not on that play several years ago.

In the games that I watched, Brown's blocking was adequate. He'd often get the job done, but his technique would be sloppy. In the play below, he kept the rusher off Luck, but he was thrown off balance in the process. This was a result of blocking too high with his hands too far to the outside. He would up wrapping an arm around the shoulder of Demps, allows Demps to essentially push him to the ground. Demps was slowed enough for Luck to get the pass off, but poor technique will eventually come back to bite you.

It isn't all bad though. As I said, Brown is adequate. He positions himself well and sets his feet properly. In San Diego's offense, he won't need to hold a defender off for long, so he should do just fine.

I generally don't bring stats into these posts (even though I am a big stats guy), but something struck me when looking through Brown's game log last year: he is either very on or not. He didn't have many "average" games. Of the 15 regular season games he played, he was between 3.5 and 5.5 yards per carry only 3 times. Part of that is sample size, he only had 10+ carries in a game 5 times. Still, the film also bore this point out. Brown is extremely effective on his good days, and pretty lousy on his bad ones.

This play also occurs Week 16 against Kansas City, and was his 33 yard touchdown run where he displayed a number of valuable skill. He showed good vision weaving through the blocks laid out for him. He displayed some power while breaking a pair of arm tackles. Toward the end of the run (not shown in the GIF), he put down a solid stiff-arm as well.

Sometimes his vision isn't as great, though. On the run below Week 17 against the Jacksonville Jaguars, he had three options to cut to. To his right is obviously the worst option, as #20 Mike Harris is waiting unblocked that direction. Either of his options to the left are good, depending on if C Samson Satele is able to make the block on #51 Paul Posluszny. Going to the right, Brown gets a 3-4 yard gain. Going to the left, he picks up 8-9 yards, most likely. If Satele is able to make his block, Brown could break out for a huge run. 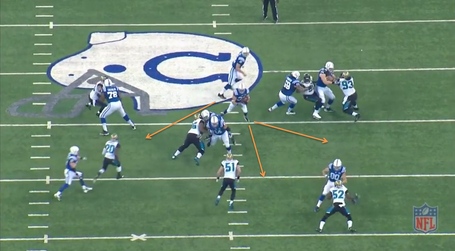 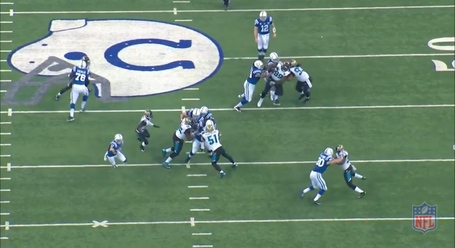 Brown cuts right into his own offensive linemen. Satele makes a fairly ineffective block and Brown recovers only enough for a 7 yard run.

In open space, Brown's footwork is pretty good, and is able to make men miss. He has reasonable power running, and is able to break tackles if the defender isn't using good tackling form.

Donald Brown is a definite asset when added to the rotation of Ryan Mathews and Danny Woodhead. While not quite the power runner Mathews is, and isn't as elusive in open space that Woodhead is, he is somewhere in the middle on both skill sets, providing a solid addition in the backfield.

While not a highly effective route runner, he does have good hands and catches the ball well. Once he has it in his hands, he gains yards effectively on passing plays, although doesn't often break out big gains. His blocking skills are adequate for what he'll be asked to do with the Chargers, although he is hardly at the head of his field in this skill among running backs.

When running, he is streaky game by game, sometimes showing great skill, but other times choosing his gaps poorly. The Chargers would be best served giving him a series or two in the late first or second quarter to gauge his effectiveness. If he is running the ball well, keep giving the ball with fair regularity. If he doesn't seem to be performing well, use him sparingly for the rest of the game.

I think it is highly likely that there will be a game or two this upcoming season where Brown will be the star of the Chargers offense. I don't think it will be a regular event, but he is good enough that it will happen at some point. This is a solid signing by Tom Telesco that will ensure the Chargers have an effective running back beyond the 2014 season.