This author's attempt to create something akin to a cash flow analysis (starting cash, changes, ending cash) for the Chargers, starting with 2012 value, value of players lost, value of players gained (draft, FA) and changes in player performance that were on the roster for both years totaling to the ending 2013 value.

Share All sharing options for: Analytics: Improvement in the San Diego Chargers Offense

As we look forward to free agency, the draft and all the decisions facing the San Diego Chargers and other teams, I thought it would be interesting to revisit all the changes from last year to now, but using metrics as much as possible.  The idea was something very similar to a cash flow statement, outlined below:

So I have a subscription to Pro Football Focus (PFF) and wanted to use their points as a kind of metric to allow such an analysis. So, the parallel "PFF Flow" would look something like:

So, I have done that and will show the results below for the offense.  There were several methodological obstacles to overcome leading me down an Excel wormhole from which I think I emerged largely intact.  In summary, the methodological problems were as follows:

So, in summary, I could not just add them up.  I did do the following to help circumvent these problems:

I can expand on my methods for anyone interested (assuming there is).  But, here are some charts showing the type of analysis I was trying to do. 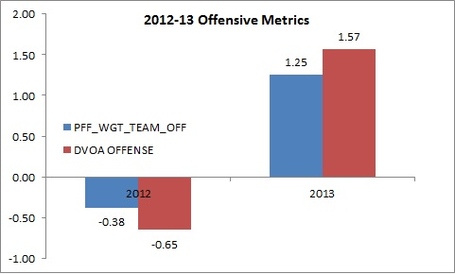 The metrics are not identical but at least somewhat similar.  So what?  If I kept it at the team level, this would be creating a new metric that was probably worse than existing team metrics at explaining team performance.  What I like about this metric is that it's granularity goes down to the player level, so you can drill down to positions and players.

So here is the same data for San Diego, but providing aggregated position value for the offense. 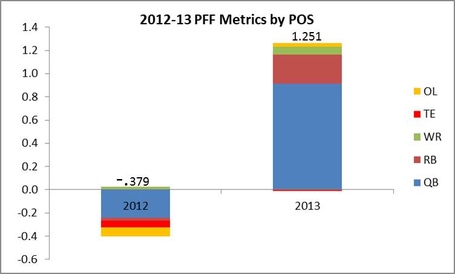 The idea is you can see the same change in aggregate at the team level (-.379 to 1.254) but also the component parts of the offense that comprise that score.  DVOA and other team level metrics typically don't allow that.

The obvious observations are as follows:

The validity of these conclusions are clearly open to discussion but I find it interesting to see what the data says.  The following table may help make clear some of the arithmetic calculations.  Below is a chart showing San Diego's calculations for 2012 and 2013.

The WGT STDEV by POS shows the team STDEV for a particular position (detail shown below), the weight column is the weighting given each position to as it corresponds in importance to explaining overall offensive performance and the final two columns are the product of the STDEV x WEIGHT.

To emphasize, the Weight column is the result of Solver (linear optimization) in Excel trying to assign weights to the various positions as to maximize the correlation between this PFF-based data and DVOA at the team performance level.

Below is the calculation for the HB's, highlighted in purple above:

Most of the above should be intuitive, except the STDEV column.  That is calculated taking the player's score, comparing it to the mean of the all the scores for players in the same category (e.g. HB).  So, Danny Woodhead was 2.4 standard deviations above the mean, which is a very high score and he got 44.2% of the snaps, and contributed 1.07 of the total 1.14 team score.

Finally, I want to show a "roll forward"  So below shows the waterfall chart for HB position.  It starts with last year's score, takes away the players that left, adds in FA (no drafted players) and ends with this year's score. 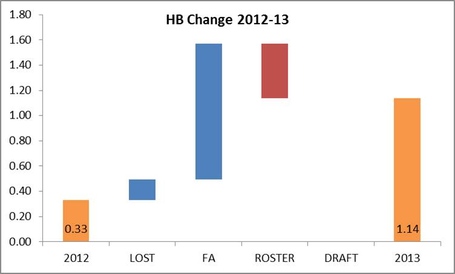 This starts with last year's score of 0.33 or 1/3 of a deviation above the mean.  The players in the LOST category included Jackie Battle and Curtis Brinkley (when playing HB).  They had negative scores so losing them counted as a gain.  Then the FA bounce driven by Danny Woodhead's extraordinary year.  The ROSTER was the change in performance by players still on the roster, Brown and Mathews.  Their scores both went down, so a bit of a loss.  We did not have any draftees at HB, so nothing there, ending at 1.14, the score for 2013.  So our HB production was a bit over a standard deviation over the mean, up from 0.33, driven mostly by Woodhead.

Here is a summary of all players, showing the flow from their own score to the impact on the aggregate team score. 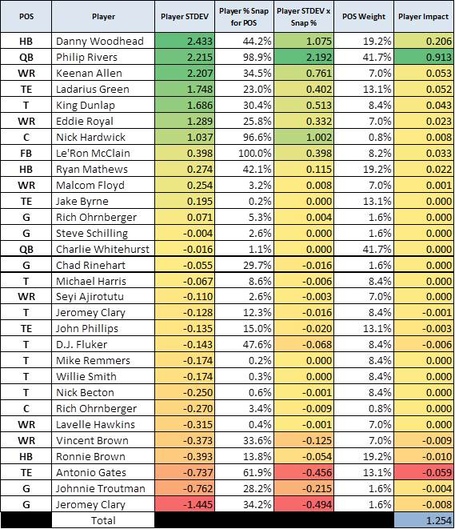 In this case, unsurprisingly, Rivers had a huge impact .913 out of 1.254 for the team.  What was troubling was how much, according to this data, Gates hurt the team.  According to the data the TE position is pretty important and he had a pretty bad year.

So, in conclusion, this data correlates well with metrics that explain team level performance (DVOA) but also allows very granular analysis within and across teams and positions.  My next steps, as I see them, are:

One interesting thing was how dramatic the offensive improvement was across the board, save TE.  It would interesting to see how many times teams had such a dramatic changes by teams with the same personnel.  This offense was driven by the same Rivers who struggled last year.  KC had a similar offensive improvement, but they also got a new, better QB so may be hard to separate the impact of the coaching.  McCoy/Whisenhunt worked some serious magic.