The Major Problem with the San Diego Chargers

Share All sharing options for: The Major Problem with the San Diego Chargers

Let's start out with the good. The defense has given up 5.5 yards per play in 2104, tied for 15th in the NFL. The 2013 Chargers allowed 6.1 yards per play, which was tied for second-worst. You probably didn't notice it quite as much as the team leaned on the run later in the year and kept the defense off the field, but it was still bad.

Brandon Flowers has been a fantastic addition to the secondary, as has Jason Verrett. Dwight Freeney is still spin-moving by left tackles at age 34. Even Kendall Reyes, who was awful last season, has held his own against the run in the past two games.

The problem with the defense is how much they have seen the field. The Bolts have only possessed the ball for 32 minutes in a game once, their upset of the defending champion Seahawks. San Diego's defense played on 42 snaps in that game. The best way for the defense to keep their successful level of play is to stay off the field. That is where the problem comes in.

This is the biggest problem in San Diego. Donald Brown is averaging 2 yards per carry. TWO! He is no Ryan Mathews, but his worst YPC was his rookie season with 3.6. His 2014 YPC would be doubled behind the performance of the 2013 Chargers line. So what gives?

First of all, the loss of Nick Hardwick hurts. As good as he is, the Chargers like Rich Ohrnberger and I believe he can be a serviceable backup. However, I do not believe that to be the case with Doug Legursky. Tough situation for him and the Chargers on their third center, but he did not do much to help the running game. When Ohrnberger returns, Philip Rivers will actually breathe a sigh of relief.

To put it simply, the guard play has been horrendous. Chad Rinehart and Johnnie Troutman rank 66th and 59th among guards in Pro Football Focus' Pass Blocking Efficiency rating, and haven't been much better in the ground game. Here is what Philip Rivers is working with when the ball is snapped: 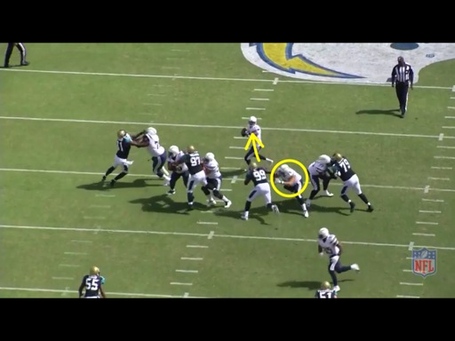 Rinehart is immediately beat by the defensive tackle. 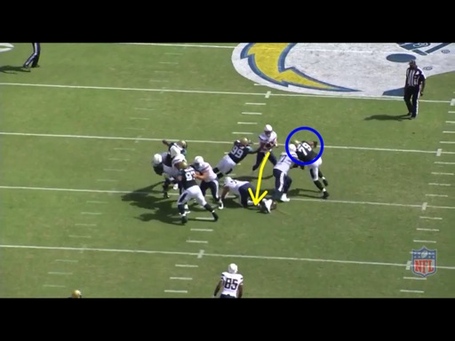 #79 comes around the edge. Usually, Rivers is able to evade the edge rush by stepping up in the pocket. Here, he can't because of the pressure up the middle.

Rinehart was a solid signing by Tom Telesco in 2013. He was an average, if not solid starting guard last season. This season, he has been one of the worst.

Chris Watt to the Rescue?

Chris Watt rotated in at RG in his debut on Sunday, and that is bad news for Johnnie Troutman. Watt may get beat physically, but his awareness is off the charts for a rookie and you won't see him missing many assignments like this: 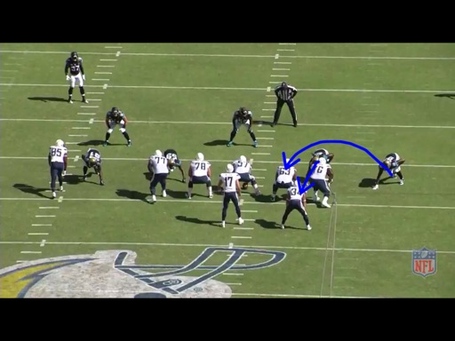 Here is a simple stunt by the Jacksonville defensive line. 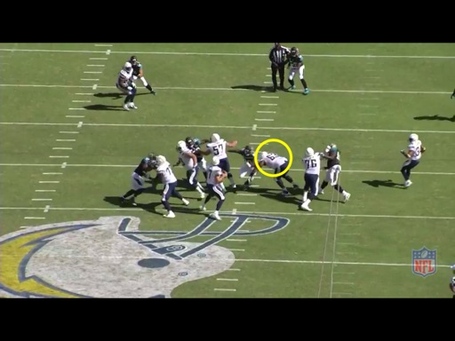 Troutman whiffs on his assignment, allowing the dreaded interior pressure and a QB hit.

Troutman has had his fair shot to win the starting gig, but ironically the rookie looks more like a seasoned veteran. If this article is anything, it is my pleading to the Chargers to make Chris Watt the starting right guard.

I do not mean to put a damper on the red-hot start to the Chargers season, but this team is built around running the ball successfully. Constant penetration up the middle will put more pressure on the running backs and the passing game and create a higher possibility for injuries. It will also force the defense that has already seen its fair share of injuries on the field more. The Chargers need to find a solution for the offensive line before it snowballs into more problems.