Kyle Posey picks out three key things the Chargers defense must do to beat the Broncos.

Share All sharing options for: Three Things the Chargers Defense Needs to Do to Beat the Broncos

As of today, Vegas, and the rest of the world don't give the Chargers much of a chance Sunday. San Diego is currently 10.5–point underdogs. I disagree with that, and strongly. Not only is it a divisional match–up, but the Chargers seem to have this weird luck against Manning like no other team I've seen before.

It's going to take a lot more than luck to beat Denver. So I'll go over 3 things that San Diego must do to stop one of the statistically greatest offenses in recent years.

How do you beat the Broncos? You stop the run. In one of their three losses this year — against the Patriots — Denver ran for 280 yards as a team. Knowshon Moreno accounted for 224 yards of that. This is an outlier. Why? The Broncos just pounded the ball up the middle and their Offensive Line dominated an Undrafted Free Agent and a sixth–rounder. Moreno was able to get to the second level and make people miss. As bad as fans think Cam Thomas has been this year, he hasn't even been remotely close to the level of awful that the Patriots interior defensive line played this game.

In the losses to the Colts and the Chargers, Denver ran for a total of 82 yards on 31 carries, or 2.6 yards per carry. Both teams played sound football, only missing 2 tackles. Moreno forced 5 missed tackles against the Patriots alone. Stopping the run allows your defense to stay ahead of the chains. This keeps Manning in 3rd–and–long, which minimizes the value of Wes Welker, who is automatic on 3rd–and–short. It also allows you to blitz, which brings us to my next point.

Move Peyton off His Spot

There's a difference between blitzing Manning, and moving him off of his spot. Manning was the least–pressured Quarterback in the NFL this year at 22.7%. In comparison, Rivers was under pressure for 33.4% of is throws, and that's still only 20th in the league. When a defense blitzes Manning, he'll pick them apart. The only Quarterback in the league who is more accurate against the blitz is under center for San Diego.

What John Pagano and the defense needs to do is force Manning to move left or right, or retreat in the pocket. Basically, pressure him to where he can't climb the pocket. If he's able to climb the pocket, he's going to find the open wide receiver, and likely for a big play. The Chargers did a fine job of this in Week 15. The combination of Eric Weddle, Marcus Gilchrist, and Darrell Stuckey rushed Manning 11 times. If you recall, one of Stuckey's rushes resulted in confusion and a sack, Gilchrist forced an incomplete pass, and of course Eric Weddle proved white men can jump (white a boost). 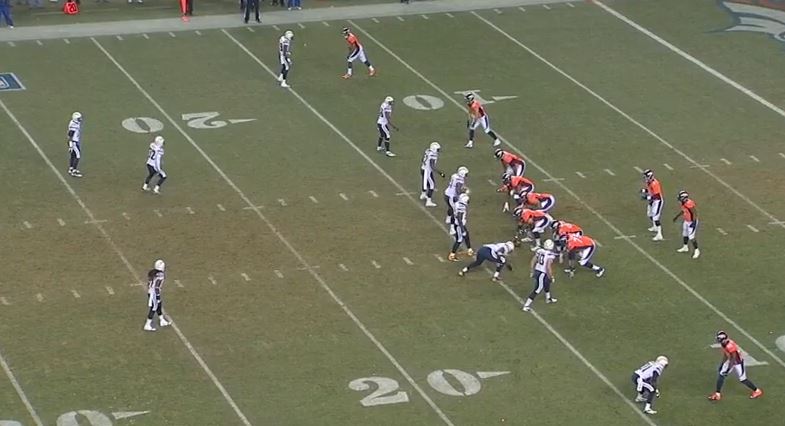 This is what the Chargers need to replicate. They need to show different looks pre–snap. Here, Gilchrist is lined up in the slot, and eventually blitzes, and forces an incompletion. Peyton had to roll left and get rid of it before he was ready to throw. Take another look at the picture, it leads into my last point on how to stop the Broncos.

Beat Up the Wide Receivers at the Line

Specifically, Demaryius Thomas. Thomas is a monster when he gets the ball in his hands. He'll be the fastest person on the field by at least 3 steps, and at 6'3, 230 pounds, he can go up and get the ball.

Here's the thing, he doesn't play as physicaly as his size would indicate. Thomas' "worst" games this year came when Denver lost. Against San Diego, he had 4 catches for 45 yards. Versus the Colts he had caught 4 passes for 82 yards (27 of those yards came after the game was decided). Finally, Thomas caught 4 passes for 41 yards against the Patriots.

Press coverage will mess up any offense, but against an offense that relies so heavily on timing, the importance of press coverage doubles against Denver. Thomas struggled to get off press coverage, catching only 51% of the passes thrown his way in the 3 losses. I know the rest of the receivers have good numbers. But I feel as Thomas goes, so does this passing game. The Chargers will need to be physical with him at the line, and limit any potential YAC opportunity.