Mike McCoy and Marvin Lewis play a game of Texas Hold 'Em. McCoy holds an ace in the hole, while Lewis holds a 6 of clubs. McCoy tricks Lewis into going All-In with Andy Dalton, and takes home a 27-10 playoff victory for the Chargers.

Honestly, I'm amazed the San Diego Chargers won this game with Philip Rivers throwing for only 128 yards on 16 attempts. Rivers completed 12 of his 16 throws (75%) for 8 YPA, 1 TD and (critically, in this game) no turnovers. Since there were so few opportunities to discuss Rivers throwing the ball, I'll discuss a handful of little things which stood out to me.

He protected the football instead of trying to be a hero, by taking the 1st quarter sack on a blitz and by eating the ball on a missed exchange with RB Ryan Mathews. His touch passing was terrific, on the sideline throw to WR Eddie Royal, a flat pass to RB Danny Woodhead, and the TD pass to TE Ladarius Green. More than anything, Rivers exemplified McCoy's strategy for the game by not giving the game away.

Running Back: A minus

The Chargers didn't have a single great performance, rather they got three strong performance which added up to a dominant performance. Before his ankle injury flared up he was rotated out,

Ryan Mathews carried 13 times for 53 yards (4.0 YPC), and also had 2 catches (2 targets) for 12 yards. Mathews had another strong game of getting yards after contact and finishing runs.

Surprisingly, the Chargers got solid work from RB Ronnie Brown, who gained 77 yards on 8 carries (9.6 YPC), and included a 58 yard TD run to seal the game late. Brown also had 1 catch (1 target) for 9 yards.

Even with their limited opportunities, the receivers found ways to make their presence felt. WR Keenan Allen finished with 2 catches on 3 targets for 21 yards. While the first target was a mix up - Allen continued his route while Rivers thought he'd sit at the sticks - Allen rebounded to convert 2 third downs in the 3rd quarter on drives producing 10 points. WR Eddie Royal finished with 1 catch on 2 targets - but it was a monster 33 yard gain which set up the Chargers' second TD. Royal also gained 9 yards on an end around, which featured a monster block from Allen on S Reggie Nelson.

The Chargers' best receiver was TE Ladarius Green , who caught all 3 of his targets for 34 yards, including a 4 yard TD pass on a fade route. TE Antonio Gates finished with only 1 catch for 5 yards. In other news, newcomer TE Jake Byrne was in for a handful of plays as a blocker, and given the circumstances (replacing injured TE John Phillips), was reasonably effective.

Offensive Line: A minus

LT King Dunlap was very good, primarily going against DE Michael Johnson, controlling him from start to finish, not giving up a sack and only a pressure or two. Dunlap was also very good against Johnson and DE Wallace Gilberry in the running game. LT Chad Rinehart had maybe his best game since early in the season, largely going against DT Brandon Thompson. Filling in admirably for C Nick Hardwick was Rich Ohrnberger, who was very good in pass and run blocking, going against Thompson and DT Domata Peko. RG Jeromey Clary was better in this game than he's been in the last few games, especially in pass protection, but his run blocking was periodically shaky. RT D.J. Fluker overall was solid against DE Carlos Dunlap, although Dunlap's (and Gilberry's) quickness occasionally caused Fluker some problems in both running and passing situations.

Given that DT Sean Lissemore was unavailable, and had replaced DT Cam Thomas earlier this season, Thomas needed to respond with a solid game. To his credit, Thomas did an overall solid job of occupying C Kyle Cook and occasionally Gs Andrew Whitworth and Kevin Zeitler. Thomas was able to get a sack on QB Andy Dalton, along with another tackle. DE Corey Liuget had a tough assignment, going mostly against Whitworth, and managed a coverage sack, along with 2 other tackles. DE Kendall Reyes had a nice pass defense of a WR screen. Among the reserves, DE Lawrency Guy and DT Kwame Geathers combined for a tackle. Generally speaking, the defensive line was good at occupying blockers and giving the LBs freedom to attack.

This is really a reflection on some really high highs, and some not as low lows. The high was the terrific all-around performance of ILB Donald Butler, who had 9 solo tackles, including 2 for losses, and made the game's biggest play, forcing a fumble from RB Giovani Bernard on come from behind strip tackle - a play where he was in coverage and initially beaten. Next to him, ILB Manti Te'o was not as strong locating the ball carrier on running plays, and did miss a couple of tackles. His pass coverage wasn't quite as good as we've seen recently, but adequate. ILB Reggie Walker had a pass defense in garbage time, and a couple of nice tackles in space during garbage time to keep the clock running.

OLB Melvin Ingram is still trying to find his footing in pass coverage and when making tackles in open space, but he's getting closer to making impact plays - Dalton's TD pass might actually have been partially the result of his hit on the QB. He also had a terrific INT, undercutting TE Tyler Eifert in the flat. OLB Jarret Johnson did allow the TD pass to Gresham, but also had a coverage sack of Dalton and was better this week setting the edge. OLB Thomas Keiser was virtually invisible.

CB Shareece Wright had his best game since the game in Denver, limiting the impact of WR A.J. Green, and finishing with 3 tackles and an INT in the 3rd quarter to set up a FG. On the other side, CB Richard Marshall was not nearly as good, giving up the majority of catches and yards against WR Marvin Jones, and also not tackling well. Marshall, however, did recover Bernard's fumble in the end zone and keep the Bengals from scoring late in the 2nd quarter.

The safety play was strong across the board. FS Eric Weddle finished with 3 tackles and a pass defensed, while SS Marcus Gilchrist was very good in run support and in coverage down the field. SS Jahleel Addae continues his recent run of solid play, finishing with 4 tackles and recovering Dalton's fumble. In a play which helped keep the Bengals from mounting a rally, S Darrell Stuckey knocked a ball out of Green's hands which might have gone for a TD otherwise. Stuckey also had one other pass defense.

P Mike Scifres' was critical to the Chargers success, as he was called on to punt 6 times, for a 43.2 yard average, and nailed 2 of them inside the 20-yard line without a touchback. Stuckey once again was terrific on punt and kick coverage, with 3 tackles. Unfortunately, Richard Marshall did not do a solid job holding his lane on the outside -though he recovered to make the tackles - as Bengals KR Brandon Tate nearly got outside a few times. PK Nick Novak converted his 2 chip shots from 25 and 23 yards, but struggled again with kickoffs, failing to produce a touchback. Blocking units weren't able to get either Woodhead or Allen loose for a return.

Mike McCoy's strategy, and the execution from his staff was terrific. The grade comes down a bit because I absolutely disagreed with some of his game management decisions, like sitting on the ball late in the 2nd quarter following a turnover, and also on 4th and short from the CIN 40 with less than 9 minutes remaining - I think he could have ended the game with a conversion. However, his strategy was to let Andy Dalton give the game away. It took 2 quarters and change, but he was proven right after Rivers drove the Chargers to a 3rd quarter lead, and Dalton answered by handing the game over on a silver platter.

Offensive Coordinator Ken Whisenhunt, with a huge assist from Offensive Line coach Joe D'Alessandris, stood conventional wisdom on its head and pounded the Bengals defense relentlessly until they finally broke in the 4th quarter. It wasn't merely a commitment to the run, it was a deft mixing of power running and zone running which had the Bengals defense a half step behind all game long.

Defensive Coordinator John Pagano also had a very strong game. By and large, he resolved not to let WR A.J. Green beat the Chargers. He also smartly rolled up his corners and largely took away the screen passes and smoke routes which are Dalton's security blanket. Secondly he toyed with Dalton the moment the Chargers took a 2nd half lead, with overload blitzes and zone blitzes, forcing him to come off his initial reads and make plays on the move.

One Play I Really Liked: Play-Action Pass to Ladarius Green 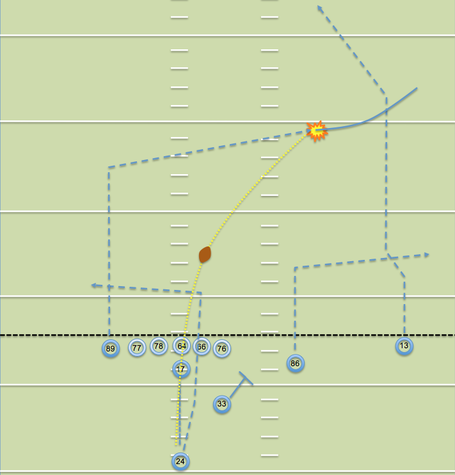 Peyton Manning, at home in the Divisional Round, where he sports a 1-4 career record. Also, looking forward to Philip Rivers not having to deal with Von Miller.