6 Plays That Helped the Chargers Beat the Bengals

Kyle Posey has gone through the film and dug out six plays that helped the San Diego Chargers to get their first playoff win in five years, this one on the road against the Cincinnati Bengals.

Share All sharing options for: 6 Plays That Helped the Chargers Beat the Bengals

I think most of us are still in disbelief. Not that the Chargers won, because the last 16 games they've proven they can beat anyone. More so, how they won. There were a few different turning points, where the game could've shifted either way. I'm going to go over the 6 biggest plays that won San Diego the game. They'll be in order of how big of a mishap they were, not in chronological order of when they happened.

6. Dalton misses an easy one

This was actually a really good call. The Bengals come out in heavy personnel, with 1 WR. They have a DT and an extra OT in the game. 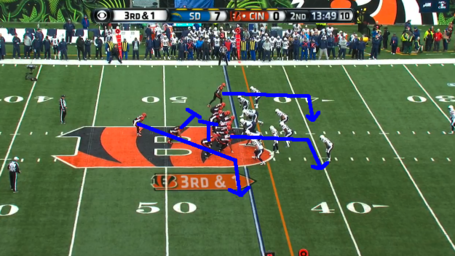 The run a power pass, and the fullback and TE(OT) to the bottom of the screen block left, selling the play action in that direction. This is to get the linebackers to false step, and it really worked. 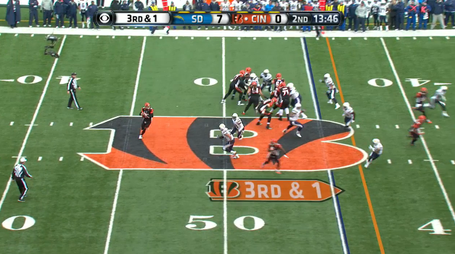 This is where Andy DaLOLton Dalton really wishes he had this throw back. He has time to step towards his target and deliver an accurate throw. If he does that, Gio Bernard is going to beat Richard Marshall to the corner, and there's no one there, it's a potential touchdown. At least a gain of 20. 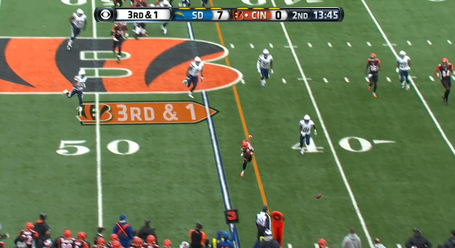 Instead he falls away, not wanting to take the hit, and misses Bernard badly. The Bengals don't get points and are forced to punt. A huge missed opportunity.

This was the 1st drive after the half. After the Bengals got a free 3 points when San Diego decided to mail it in before half. So if the defense didn't come out and get a stop, they would've been playing catch up the rest of the game, which would've allowed Cincy to run the ball, which we know is bad news.

On 3rd & 4, here's the presnap look. The Chargers have their 11 best defenders(athletes) on the field and appear to be blitzing. 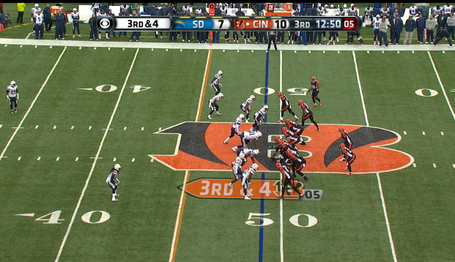 After the ball is snapped, the Chargers only rush 3, and drop 8 into coverage. 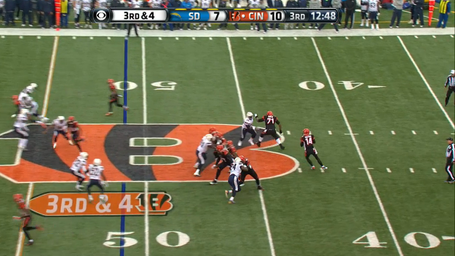 What's this do? It allows you to pack the middle, and make Dalton beat you outside the numbers, which is something he's proven to be less than great at. It also allows you to double up on receivers.

Dalton's initial read was the crosser over the middle. After he saw that was covered, he panicked, left a clean pocket, and tried to create something that wasn't there. 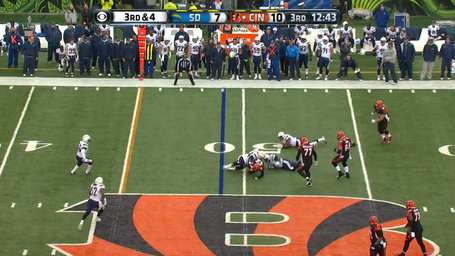 Though Dalton is a very solid athlete, trying to run for the 1st down when all eyes are on you (zone coverage) just isn't a great idea. This was a huge stop for the defense, and a good call by John Pagano.

In the 1st half, I was hot, Ken Whisenhunt was acting like the conditions were -40 degrees, and hurricane type winds & rain. Rivers only dropped back 8 times. I'm all for pounding the ball with Ryan Mathews, but there's one reason the Chargers are still playing, and he's under center.

In the 3rd quarter, things changed. The Chargers came out and ran no huddle.

This was the drive right after the drive above. I can't stress how important it is for teams to score after you get a stop on defense, most importantly, this team. That's exactly what happened here.

This was all Rivers. 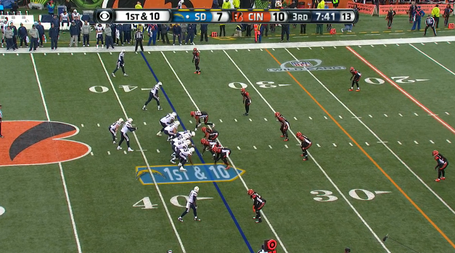 The Bengals are in a Cover-2 match-up zone. Knowing that's what they've been in for most of the game, Whisenhunt decides to run 4 verticals. 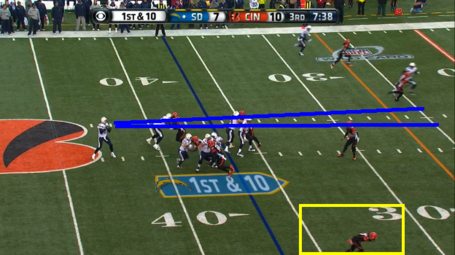 The yellow to the bottom is Dre Kirkpatrick guarding Eddie Royal. Kirkpatrick misses the jam, and Royal has a good 2 steps on him. Rivers knows where he's going the entire time. He is in the middle of pump faking the safety, to hold him onto the tight end for as long as possible. He does an excellent job of manipulating the safety with his eyes. 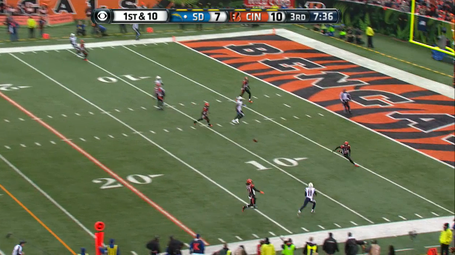 Royal did a great job of holding onto the ball knowing he was going to take a shot.

The next throw seemed like a run play, Rivers saw a blitz, and called an audible to what should be the Chargers go to red zone play. 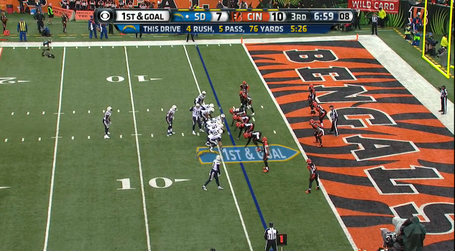 This was the initial look, as you can see, Rivers is changing the play now. 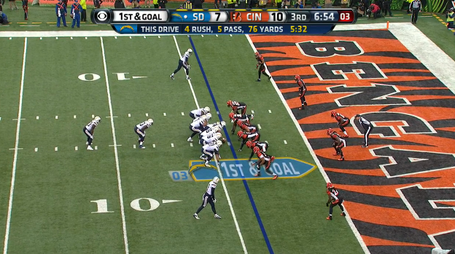 Now to the top of the screen, you have Ladarius Green, 6'5 with go-go gadget arms and can jump out of the gym vs. who's 5'11, a shade under 200 pounds, and more of a compact athlete. 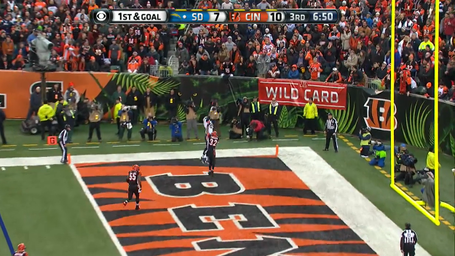 Rivers puts the ball high and away, like you're supposed to. Crocker has no chance, Green elevates, holds on, and comes down with 2 feet inbounds. The throw is just stupid good. The fact that this doesn't get attempted 2-3 times a game is beyond me. Green is a mismatch, and Rives has the kind of touch to make these throws. The Chargers were stopped 2 times after this inside the 10 yard line, and this play wasn't attempted.

This next play was after the sequence of Shareece Wright's interception (Pagano's best play call of the year) & the Chargers settling for a field goal. San Diego is up 20-10, but the Bengals are on their 35 and driving. A score here and we each get that "here we go with the same old Chargers" feeling.

San Diego is in their base defense, and is just rushing 3. 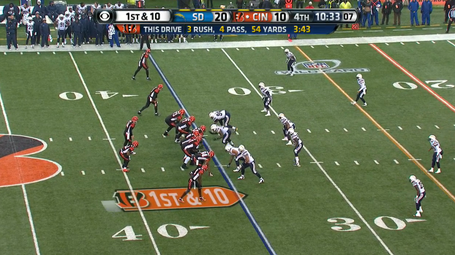 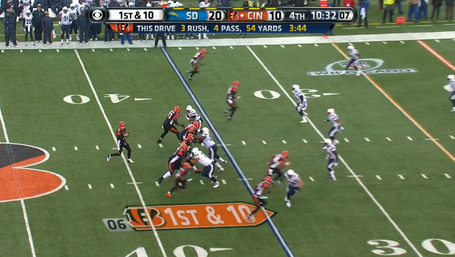 If you're going to throw this pass, here's where it needs to be. If not, throw it out of bounds. You have to miss outside on this throw. 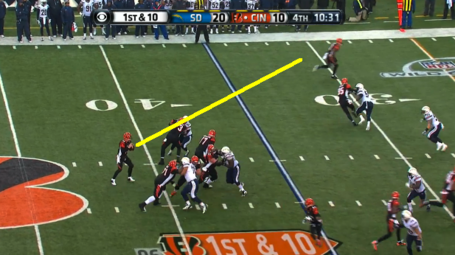 Instead, Dalton throws it to the top of the numbers, and Ingram is able to undercut the throw and make the interception. 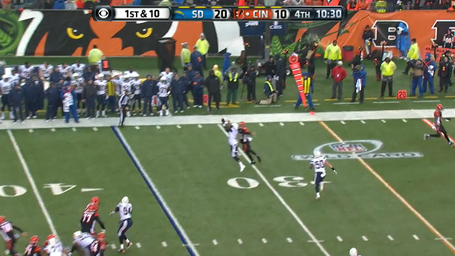 With all due respect to Ladarius Green, Melvin Ingram is the best athlete on the team. His ability to not only go forward, but move side to side, drop back in coverage is ridiculous for a guy 265 pounds.

This was in the 3rd quarter, right after Green's TD. The one thing you can't do after the opposing team scores? Go 3 and out. The 2 plays before this were a sack and an incomplete pass. It's 3rd & 14 and I'm screaming at my TV at Reggie Walker because he was standing around watching. 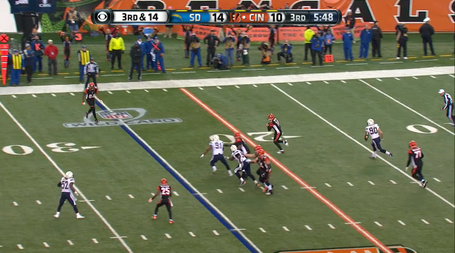 #52 in the middle, as soon as he sees Dalton leave the pocket, he should be running with him, #25 is no longer a threat at this point.

And then. Hilarity ensued.

If you're going to scramble, at this point in the game & season, why not just get as many yards as you can and take the hit? Dalton chose to slide, not only was he a half yard short, but he forgot to protect the ball.

Jahleel Addae gets a late Christmas present, and the Chargers escape what would have been a brutal 3rd down conversion.

This was in the 2nd quarter, but it was without question in my mind the play of the game. 7-7, 2 minutes remaining. If the Bengals score here, let's say Mike McCoy decides to sit on the ball, and go into the half down 7. The Bengals get the ball back and we have no clue what happens, maybe they don't score again, but off of a 16 game sample, I'll go out on a limb and say the Chargers would've given up points.

Instead, Donald Butler makes an incredible play, after getting embarrassed initially. 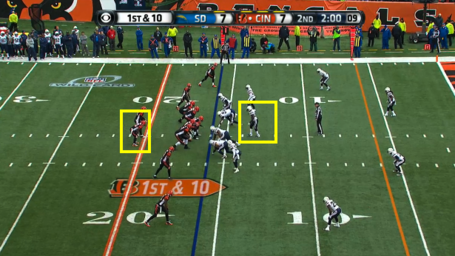 This is a tough task for anyone, but especially a linebacker to guard Giovani Bernard, who is incredibly quick and shifty. 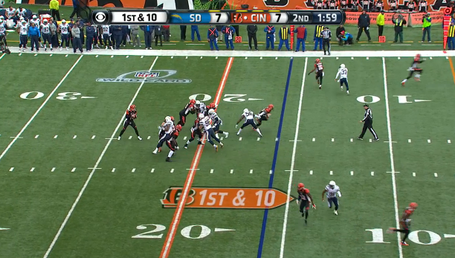 Right here, I'm thinking of if McCoy is going to go for a touchdown on offense, because it's over. Butler is in no position to guard or recover. 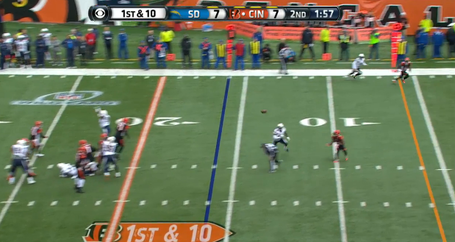 Butler did a great job of putting his head down, turning and running just to get in this position. Him looking back for the ball is a no-no, he just needs to get to Gio and from there, worry about the rest. 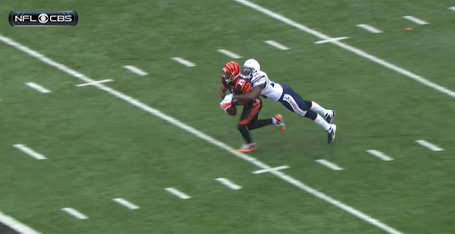 Butler's recovery speed allowed him to be in a position to make the tackle before Bernard was able to fully secure the ball. Which was the main reason for the fumble. It was a heck of a play by Butler, and no doubt the biggest play of the game.

The power of the quarterback in the NFL.

Dalton showed zero awareness for most of the day, and was always in a hurry. While Rivers was calm, under control, and (besides the missed throw to Keenan Allen on 3rd down) played a great game. Imagine this for a second: if the two teams switched QBs, where would they be?