As usual with the Chargers, Sunday was chock-full of highs and lows, but there has always been one constant in San Diego over the last eight years: Philip Rivers and Antonio Gates are really, really good together.

I'm pretty sure that game on Sunday was the best Chargers game I've ever watched and also the worst. They put us through the usual roller coaster, but this particular time it felt like they took us from the peak of Mount Everest to the floor of Death Valley, and vice versa, all in the matter of seconds.

It all started with the Bengals and Jets winning, thus allowing San Diego to control their own destiny. The roller coaster continued when the Chargers trailed 21-14 at halftime to a Chiefs squad who was resting its starters. Things heated up when the Chargers mounted their comeback in the second half to tie the game only to watch Chase Daniels drive the Chiefs downfield for the winning field goal. Just when all hope faded for Chargers fans the world over, Chiefs kicker Ryan Succop missed said field goal at the end of regulation. And that wasn't even the end of it.

It was a wild, wild ride. Even so, the steady, constant tandem of Philip Rivers and Antonio Gates was once again on full display.

Daniels connected with Dexter McCluster on a swing pass for a 2-yard touchdown late in first quarter to restore the Chiefs' touchdown lead over the Chargers. Philip Rivers and company responded by driving 76 yards, down to the Kansas City four-yard line, largely on the back of completions to Keenan Allen and Eddie Royal of 24 and 30 yards, respectively. Faced with a crucial third-and-goal, Rivers turned to his ol' reliable buddy one more time. 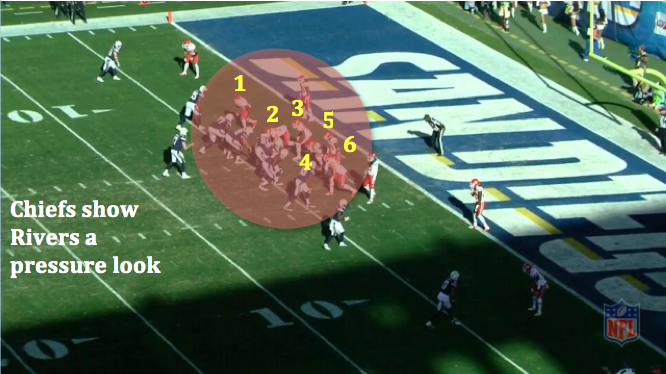 One of the best things Ken Whisenhunt and Mike McCoy have done this season is allowed Rivers basically unlimited freedom at the line of scrimmage. In the past under Norv Turner, Rivers could do some stuff at the line, like, say, changing Malcom Floyd's route into a go based on the way the coverage played him, but it wasn't anything like the freedom Rivers enjoys now. He didn't have the ability to put the Chargers into an entirely different play based on what the defense showed him. Now he does, and the payoff has been huge.

Rivers has always been pretty good against the blitz. But this year, with the license to change the play on a whim, he's been unbelievable. According to Pro Football Focus, when Rivers was blitzed in 2012, he was good for an 88.2 Passer Rating, which isn't too shabby. However, when he was blitzed in 2013, he was good for a 106.9 Passer Rating. With numbers like those, defensive coordinators should start adopting a strategy against Rivers that has often been used against Peyton Manning: don't show him any clues until it's too late for him to change the play.

Here, however, the Chiefs decide to throw caution to the wind by coming out of the huddle in a pressure look, with six guys on the line of scrimmage. They're most likely coming and Rivers knows it, so he changes the play by putting Danny Woodhead in the backfield and pulling Ladarius Green back tight to the line to stay in to block. As this is happening, Rivers also makes sure everyone has the protection by establishing that the "Mike" is the linebacker sitting in the A-gap, (who will be Woodhead's responsibility). 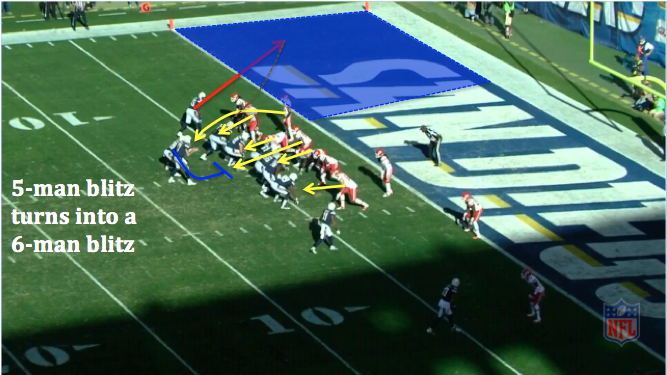 With Woodhead moving into the backfield to block, the safety that was covering him on the outside is now going to come on the blitz, turning it into a 6-man pressure. That's the guy that'll come screaming around the outside unaccounted for, but it'll be all to no avail. With the defense clearly in man coverage, Rivers knew right when he changed the play that he was going to throw the fade to Gates, so there was no chance any Chiefs defender was going to get there in time.

Although Gates did a wonderful job on that poor cornerback, Rivers made this play by using his intelligence and savvy. He'll have to manipulate the Bengals' stout red zone defense in similar ways and put pressure on Andy Dalton to come from behind if the Chargers have any hope of riding into divisional round of the playoffs still alive.

Hopefully this time it'll be less of a roller coaster ride.