Based on what we've seen this season, Mike McCoy appears to be at least a league-average Head Coach. If he continues to learn from mistakes, and improves as a game manager, he could become one of the league's best young Head Coaches.

Share All sharing options for: Was Mike McCoy's First Season a Success?

It was about a year ago when Dean Spanos made the decision to relieve former General Manager A.J. Smith and Head Coach Norv Turner of their positions with the Chargers. The Chargers would go on to hire Tom Telesco as General Manager, and he would hire former Broncos Offensive Coordinator Mike McCoy as Head Coach.

First, let's examine the reasons Turner was fired, and what McCoy was brought in to address. These reasons are taken from my post explaining why fixing Philip Rivers was the priority when hiring a new Head Coach, and my post summing up the Smith/Turner era in San Diego:

How to fix Philip Rivers and Win Games in the Process

McCoy, to his credit, hired former Steelers Offensive Coordinator and Cardinals Head Coach Ken Whisenhunt to help get Rivers and the offense moving again. Whether Whisenhunt is mostly responsible for the offensive design or not, it seems evident to me that McCoy and Whisenhunt agreed in broad terms on how best to fix the offense, and win games in 2013 in general.

The plan was to keep the offense in favorable down–and–distance situations by doing the following:

Philip Rivers not only had a bounce back year in 2013, it was arguably a career year. Let's take a look at the numbers below:

The 69.5% completion rate, TD–to–turnover ratio, and fumbles are all career–best marks. The yardage total, TD passes, and Interceptions are tied for 2nd–best. As an added bonus: Rivers returned to his late–game form from 2006–2009 by authoring four 4th–quarter comeback wins, which ties his 2006 and 2008 seasons as career bests.

Now, consider Rivers was doing this in his first season in a new offensive system, with almost completely new skill players (excepting Antonio Gates, Ryan Mathews, and to a lesser extent, Vincent Brown), and an offensive line returning 1 starter from the same position from the previous season (Nick Hardwick at Center).

Secondly, and this has really flown under the radar, but Ryan Mathews has finally become the go–to running back that everyone hoped he could be once he was drafted in 2010. Some of the improvement is related to finally being mostly healthy, but Mathews' attempts, yards, long run, total TDs, and fumbles are all career bests.

Let's see a few more numbers showing the offensive improvement - based on the game plan above.

*All stats in this section from Pro Football Reference.

Now that McCoy has completed his first regular season with the Chargers, and we have an idea of how his overall strategy works, we can judge if it was effective. Some of the following information is repurposed from my post in August discussing the Chargers' slim chance for reaching the postseason. 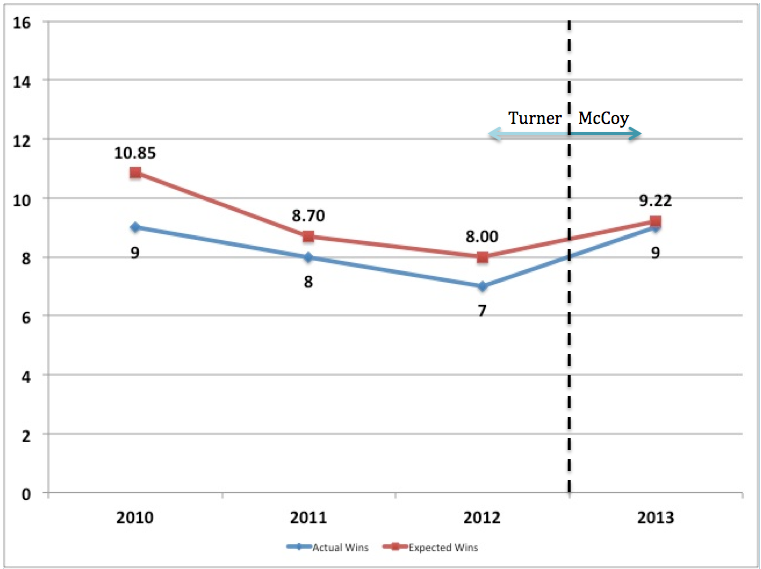 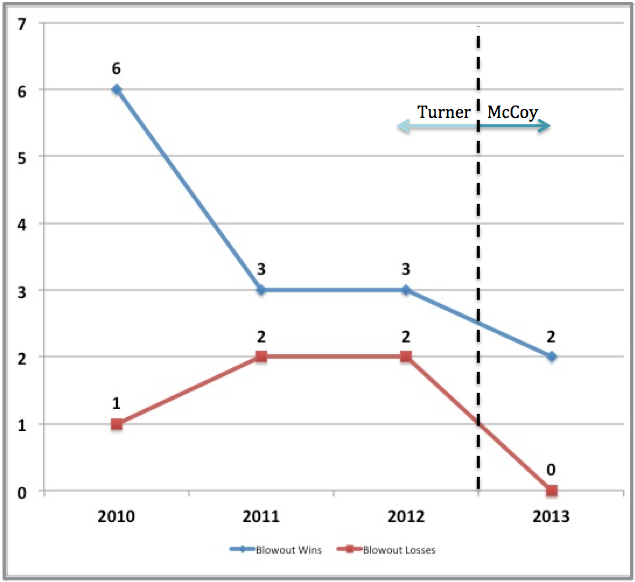 Generally speaking, blowout wins and losses (i.e. games decided by more than 14 points) are a better indicator of team quality. In Norv Turner's final 3 seasons, you can see the drop off in blowout victories, which reflects the loss of talent under A.J. Smith. As Tom Telesco has only been in San Diego for 1 season, he hasn't yet been able to fully rectify this drop off.

However, Mike McCoy does have one advantage: the 2013 Chargers were not blown out of any of their games. Considering the drop off in talent, this speaks to how well McCoy and his coaching staff have designed the overall strategic approach, and how they've been able to execute it on a week-to-week basis. 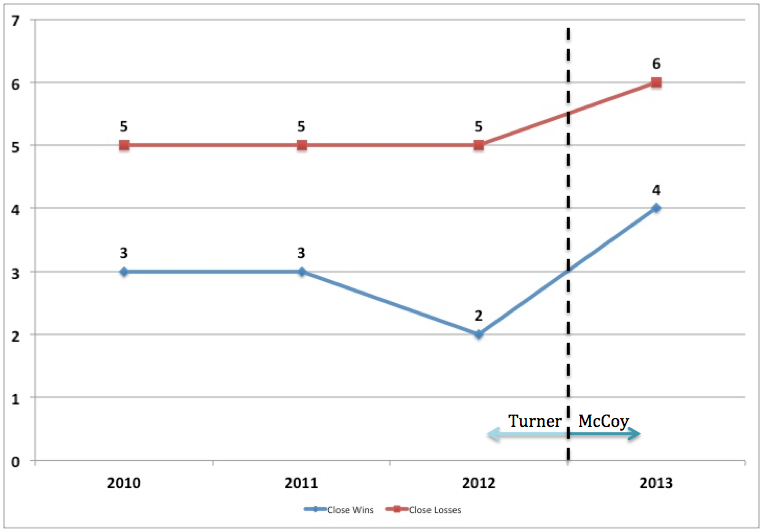 Close wins and close losses tend to regress to the mean. Norv Turner struggled mightily in close games from 2010-2012, posting an 8-15 record - winning only 36.4% of the time. A record closer to .500 might have saved both his and A.J. Smith's jobs.

This was the one area where McCoy had the greatest opportunity to better Turner's performance, but McCoy posted a 4-6 record (40%) in close games. It's also the reason McCoy has been criticized so often by the writers and commenters at BFTB for his game management decisions. The margin for the 2013 Chargers making the playoffs was thin to begin with, and McCoy didn't do a good job of helping his team win 1 or 2 extra games they might lose otherwise.

Because it will take Tom Telesco and his staff another couple of years to fully restock the roster, McCoy's performance in close games is likely to be the single most critical factor in whether the 2014 Chargers make the postseason - thusly, his game management is the single biggest opportunity for improvement.

Mike McCoy needs to work on the following elements of his coaching.

At the same time, he showed the following essential traits for being a solid NFL Head Coach:

Most importantly, McCoy (with a giant assist from Ken Whisenhunt) has helped return Philip Rivers to elite QB status, and once again is a player the Chargers can build around for the next several seasons.

Based on what we've seen this season, Mike McCoy appears to be at least a league–average Head Coach. He's an improvement over Norv Turner, as far as getting close to the expected performance from his team, and in his willingness to craft an identity which gives his team the best opportunity to win.

If Mike McCoy continues to learn from mistakes, and improves as a game manager, he could become one of the league's best young Head Coaches.