Jason Peters takes a look at Andy Dalton's four interceptions against the Ravens last week to determine how the Chargers might force turnovers from the Bengals quarterback.

Last Sunday, the Baltimore Ravens defense intercepted Andy Dalton four times. While the Ravens were unable to capitalize on the turnover-happy Dalton, the San Diego Chargers would greatly benefit from several Dalton turnovers. Let's look at the interceptions and see what the defense

On the first play from scrimmage, the Bengals line up spread, with two receivers on either side and Benjarvus Green-Ellis to Dalton's left out of the shotgun. The Ravens line up with a man look with a single high safety. 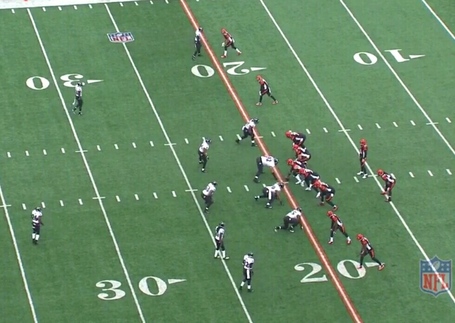 Dalton correctly reads this and opts to take a deep shot to Marvin Jones on the right sideline, with Jones having a one-on-one matchup against cornerback Corey Graham. 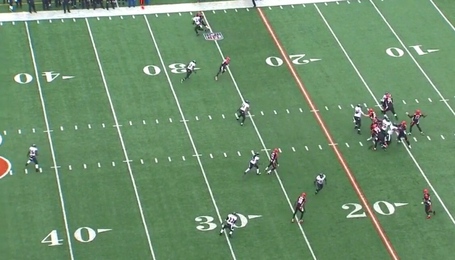 The ball arrives at a crowded Jones 24 yards past the line of scrimmage. Jones jumps up and tries to haul in the pass. The ball bounces off Jones' hands and Graham takes advantage and snags the interception.

During the broadcast, Phil Simms is quick to say that Dalton overthrew this ball. How about we take a closer look at the moment the ball arrives, shall we? 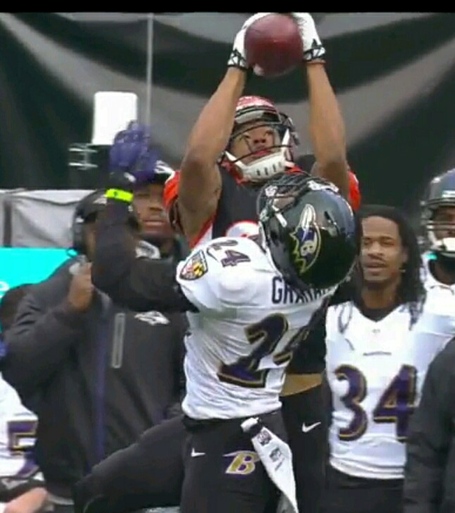 I'd say Dalton actually throws a pretty good deep ball on this play. Any higher and Marvin Jones doesn't have any chance of hauling it in. Lower and Graham can block it with his body. This interception is largely on Jones for failing to haul the pass in. He would go on to have a great game, but this play is a huge negative for him. And on sideline jump balls, a quarterback should err missing high, as then an incompletion would just sail harmlessly out of bounds.

What the Chargers Can Learn: Keep playing the ball. While talented, the Bengals recievers are not particularly sure-handed. Among the 177 player with at least 40 targets, the most sure-handed receiver the Bengals have is Giovanni Bernard, ranked 63rd in drop rate. This should create a few opportunities for the Chargers to intercept a pass that a receiver failed to haul in at some point in the game.

After the first Dalton interception led to a field goal, the Bengals were starting to drive down the field, picking up a few first downs. Facing a 2nd and long after a delay of game on first down, the Bengals line up in a four receiver set, with three receivers bunched on the right side. Dalton is in shotgun, with Giovani Bernard to his right. The Ravens line up with two safeties deep, and two linebacker off to cover the middle of the field. 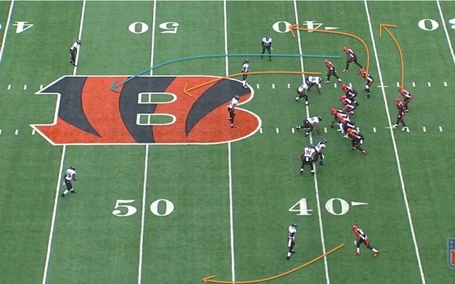 A.J. Green is the target here, running a deep post route. Andrew Hawkins runs a similar route about 5 yards more shallow. Tight end Alex Smith will run out to the flat and up the field, while Bernard does the same about 5 yards deeper.

Dalton will take the snap and look to the left at Marvin Jones to draw the safety that direction. Then he'll try to launch a pass to A.J. Green down the deep middle of the field. 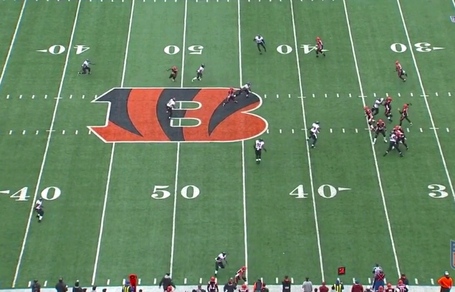 With two defenders watching the ball in front and a safety over the top, this pass needed to be absolutely perfect. It was not, and Dalton overthrew Green by about 5 yards, leading to an easy interception by safety James Ihedigbo.

Looking at the screenshot above, if Dalton had checked down to Bernard, with Smith as a blocker, he could have gone up the sideline for an easy 5-10 yards. The defense was clearly focused on the middle of the field, and that is right were Dalton threw it. 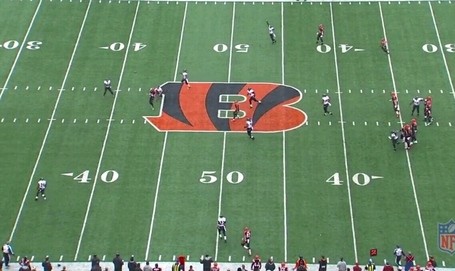 What the Chargers Can Learn: Andy Dalton can be inaccurate. There are numerous instances throughout the game where the ball either sailed high or came up low, and a well-positioned defense can take advantage of that. By having the corners watch the underneath routes and having a safety over the top, that can force Dalton to make perfect throws, something he doesn't always do.

This interception was nearly identical to the Weddle pick in the previous matchups between these two teams. Then, Dalton overthrew Green on a corner route, and Weddle was easily there to grab the pick.

The Ravens went 3 and out to start the second half with the Bengals leading 17-6. After starting with good field position and picking up a first down, the Ravens faces a 3rd and 7 in Baltimore territory. The Bengals lined up spread again, with 3 receivers to the left, and one to the right, with Dalton in shotgun with Bernard to his right. The Ravens will crowd the line of scrimmage with two deep safeties. 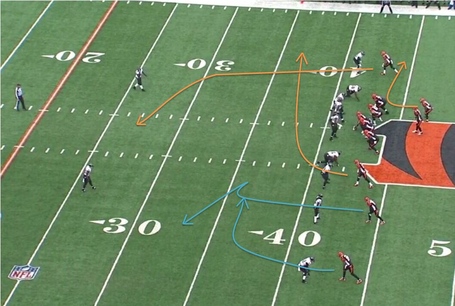 Lined up on the far left, A.J. Green will get a free release to the inside and run a short slant in. Dane Sanzenbacher, lined up next to Green, will run upfield 5 yards, fake in then run out. Baltimore sends 5 on a blitz and gets good push up the middle, possibly forcing Dalton to throw earlier than he'd like. 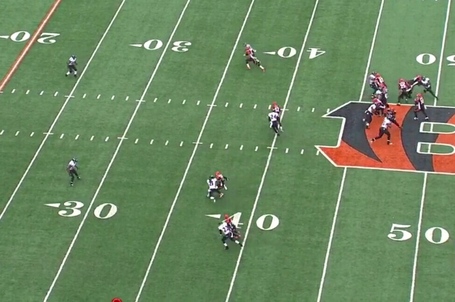 The official intended reciever is listed as Green, but I'm not entirely sure of that. Either Dalton overthrew and overled Green, or he underthrew Sanzenbacher. Raven corner Ladarius Webb had his eyes on Dalton the whole play, and stopped to cut off the pass the moment Dalton released. He jumps, catches the pass, and makes the easy interception.

It looked to me like Green slowed down just before Webb made the interception, which is part of why I'm not sure the pass was intended for him.

What the Chargers Can Learn: This throw is again about Dalton's inaccuracy. Whichever receiver he was aiming for, he missed. Dalton was also looking left the entire time, allowing the defenders to take a chance when he actually threw that direction. At the time of the pass, the safety was already charging toward the play, providing easy security if Webb missed on his interception attempt.

Also interesting was both of the last two interceptions came with multiple receivers along the same line of site at the time of release. Route combinations are done this way sometimes to make it quicker for a quarterback to make his reads. He can progress from one receiver to the next without even moving his head, which is useful for young quarterbacks still adjusting to the position. However, it does also bracket the receivers between defenders, forcing the quarterback to make accurate throws.

Up 10 points, the Bengals had marched from their own 29 to the 1 yard line in just 4 plays, including a 15 yard unnecessary roughness penalty. Let's just take a quick moment the best course of action would be to hand the ball off up the middle until either a touchdown is scored or you run out of downs.

Dalton lines up under center with a receiver on either side, two tight ends on the left side of the line, and Giovanni Bernard as the back. 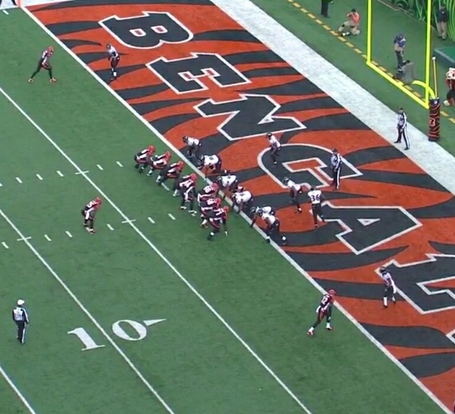 This is the classic end zone fade route, intended for A.J. Green on the left side. Dalton will take the snap, stand up and immediately throw the pass to the left side. 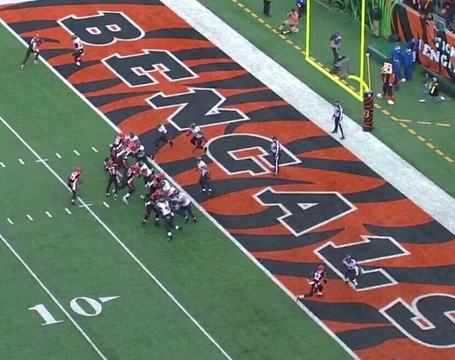 There are generally two flavors of pass on this type of route. The high jump ball, or throw to the shoulder opposite of the defender. Given that A.J. Green turns around and jumps, I believe it was supposed to be the the former. Instead of finding a high pass, Green finds the throw moving toward his midsection. Jimmy Smith reaches and snags the pass before it reaches A.J. Green's hands. 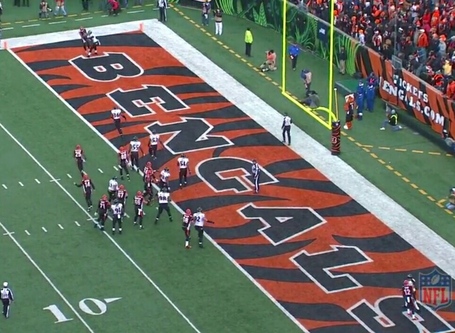 What the Chargers Can Learn: Dalton was once again off on his pass, and the defender was aware enough to take advantage of it. Dalton tried to throw this pass with touch, and not velocity. The pass appeared to die midair, and dropped far lower than the pass was intended.

Andy Dalton made a lot of unforced errors in this game. The Chargers defense will get their chances to force turnover, but they will need to be in position to make them. Safety play is part of the key. If the safeties can be trusted over the top (and that has been the case lately for the Chargers), then the corners can take some chances and jump some underneath routes. Dalton will eventually slip up and either throw short or let the ball sail. With the weather predictions for Sunday calling for rain and snow, the ball will be slick, further increasing those chances.

The defense also needs to be ready for tip-drill interceptions. No Cincinnati receiver was terribly great when it came to drops, and these types of picks have featured prominently in Weddle's career.

Dalton likes trying to force passes to A.J. Green, as can be seen with Green prominent in 3 of the 4 interception plays. Green was the 3rd most targeted receiver in the NFL this season, and should always have a safety shadowing over him. Dalton will throw a few inaccurate passes Green's way, and the defense needs to be prepared to take advantage.