Kyle Posey watched the Chargers' first preseason game against the Cowboys and and reports his impressions of how the first–team defense played.

Share All sharing options for: Takeaways from the First-Team Defense in the Chargers vs Cowboys Preseason Game

The first team defense played one series that lasted 14 plays. There were some bright spots, some head–shaking plays, and some good old–fashioned 2013 Charger defense. Remember: it's the preseason, that means everything you see is final and there's no such thing as an overreaction.

Let's start with the men up front.

Let's start at nose tackle since the defensive line had to do some shuffling to account for Corey Liuget being injured. From the first play of the game, Kwame Geathers set the tone up front. After Dallas motions, Geathers has his head up versus the center and drives him a couple yards into the backfield. 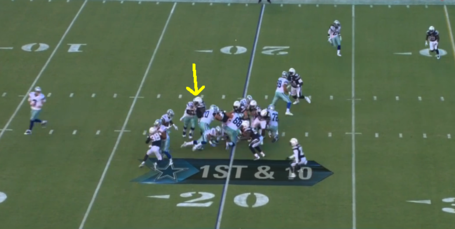 Geathers' strength was showcased on the very next play. 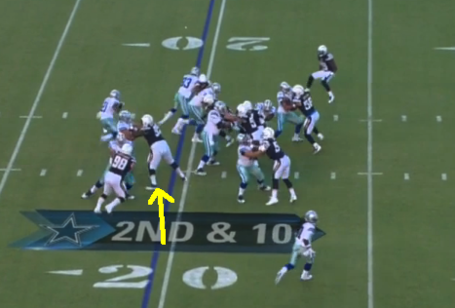 Geathers was able to "reset the line of scrimmage" on one more play. He was impressive this entire drive. He stood up linemen, but more importantly, he held them back so the linebackers behind him could be in a position to make plays. That's what a defense wants from their nose tackle. Geathers would get an A for his work during the first series, with the only caveat being he was on the field for fewer than 10 snaps.

Sean Lissemore and Jarret Johnson gave the Chargers defense exactly what they always give: they did their job. Lissemore's ability to play defensive end in this defense could be huge moving forward, especially if a certain trend continues......

Again, one series, so I'm not going to act like the sky is falling with Kendall Reyes. But man, it was not an ideal performance. You'll see the chart later on, but in 7 snaps on run-plays, Reyes lost 5 times, and was on the wrong side of the line each time. He ended up on his back twice.

It's not like Reyes was going against a savvy veteran either, he was against a rookie offensive lineman. It's something to keep an eye on moving forward, but someone has to hold Reyes accountable for his play. This isn't anything new.

Melvin Ingram is a tough player to figure out. He's immensely talented. It doesn't take long to figure that out after watching him. But where exactly do you play him? Some have suggested he play inside on passing downs at defensive tackle, others even at inside linebacker.

The second play of the game highlights what might be the best spot to utilize Ingram.

Melvin is stacked behind the defensive end, that way he's protected from linemen. This gives him a chance to get a head start and be the aggressor, where he can use his strength and athleticism. Either way, moving him around is the best bet. Ingram was solid against the run. Only lost one time. He's very capable of jolting offensive lineman back in the backfield, as he showed: 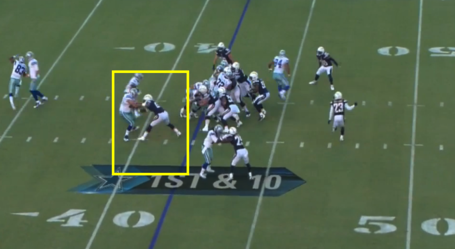 As a pass rusher, Ingram continued to show that he still hasn't developed an arsenal. The picture below speaks to his athleticism. Melvin is the 1st one off the ball. Hell, some players on both sides of the ball haven't even moved yet and he's a yard upfield. 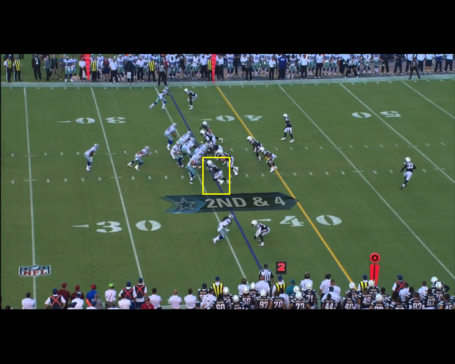 Here's the issue. Once he has to engage with the offensive tackle, Ingram has no idea what to do. No bull rush, no arm over move, no rip through, nothing.

He resorts to putting his head down and trying to run under or through the tackle. That's just not going to work. This happened a few times where Ingram could explode off the line, but look clueless when it came time to use his hands. To his credit, Melvin had a stutter step move where he did beat the right tackle one time, but the running back was there to chip him and prevent Ingram from getting to the quarterback. If "Supa Melvin" is going to be the hero that fans want him to be, he's going to have to develop some pass rushing moves asap.

These are only run plays. Didn't chart the pass plays because outside of the time Ingram came free up the middle, nobody one their individual match-ups.

It was good to see Manti Te'o playing like you'd expect to see Manti Te'o play. He was playing faster, trusting what he sees, and most importantly: not playing tentatively. I believe I only counted one time where he was moving lateral when he should've been moving forward. Te'o playing downhill directly tied into Donald Butler's success. The first team gave up 29 yards on the ground on 6 carries, but it wasn't because of the inside linebacker play (for a change.)

I actually thought Te'o played more consistently aggressive than Butler. There were a couple plays where Butler was caught flat–footed well behind the line of scrimmage. That's when the big runs happen, when the player is thinking instead of reacting. I also thought the same happened on the second play of the game where Butler hesitated just enough, that it allowed a 10 yard gain. 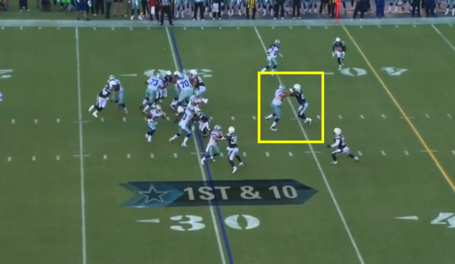 I still don't think it's wise to blitz the two. The play generally ends up with both running into the lineman and being a waste of a play. Butler was able to beat the running back, but by the time he did his late pressure didn't affect the play. I would like to see the two come on green-dog calls more often (I suggest reading that link, it's very informative.)

In pass coverage, both were fine. Both did a good job of getting depth in zone coverage, and guarding their man in underneath coverage. In fact, Te'o made the best play of the series. Incredible instincts here.

It's a screen play, and by the time the QB is on his 3rd step, Te'o reads the play, breaks on the ball, squeezes between the offensive linemen, and finishes the play alongside Eric Weddle. That's a big boy play.

If I had to grade their performance I'd give Te'o a B and Butler a B-. Moving forward, I would like to see the two continue to make plays, but be more consistent about it.

Whenever you're ready, Brandon and Jason

The safeties weren't really challenged in this game, or at least from what I could tell from the broadcast view. Shareece Wright was okay in coverage, but man, that missed tackle was huge.

I have a hard time imagining Jason Verrett or Brandon Flowers missing this tackle. Perimeter tackling is huge in this defense. Wright can't continue this if he wants to stay on the field as a starter. This should have been 3rd–and–9 but the missed tackle led to a first down.

Steve Williams got called for a defensive holding, which was BS, but they called it. He also got beat on a slant, where he gave absolutely no resistance. The receiver was able to run right through him and create separation.

Luckily, it was a drop. Williams also gave up a short pass, that wasn't a big deal, only a gain of 2 yards. But he wasn't in a position to make a play. Instead of trying to be physical, like the above GIF, perhaps Williams should look to mirror and use his athleticism to stay in front of receivers.

When the team went to a sub package defense, Richard Marshall came in and played the slot. Remember this off season reading about how he's faster and bigger with more muscle? Yeah, go ahead and move those to your spam folder.

Holy cow, he had some awful plays.

On a 3rd–and–4, Marshall was in man coverage against the slot receiver, and he had Marcus Gilchrist as the robber inside, to help take away any crossing routes. With this defensive alignment, there's literally one route the receiver can run to beat you. Sure enough:

On the drive after this, Marshall let Beasley blow by him across the middle, for what would've been an easy first down. He also came up in run support and completely whiffed on an open field tackle. Didn't lay a hand on the back.

Get well soon, Jason and Brandon.