Breaking down one of the more popular players in the draft, nose tackle Louis Nix

Share All sharing options for: Louis Nix III: The Next Jamaal Williams?

By far the most popular pick in every pointless mock draft that we love to read. Louis Nix was one of the most dominate players in college football. In 2012. Things changed in 2013 for various reasons, whether it was him coming in over weight, being effected by injury, or just not improving. Nix is still very, very good. I rated him as the 3rd best interior defensive lineman in the draft. I just don't think he's the next Jamaal Williams or Vince Wilfork that fans seem to think. Again, full disclaimer: I DO NOT HATE LOUIS NIX.

There are plenty reasons to get excited about Nix when you watch him. When he fires off low, his first step is very impressive. This allows him to initiate the 1st contact, that's when Nix is at his best.

He's also best when he is aggressive. Nix can fire off and beat lineman with either quickness or a quick arm over move. On a snap to snap basis, Nix was routinely the 1st player off the ball on both sides.

Men who are that large aren't suppose to be that quick off of the ball. Nix is also good at locating where the play or ball is, another underrated, yet important trait for a nose tackle.

We know what Nix can bring to the table, but there were several issues I had with his 2013 tape. There was no improvement from his sophomore year. There were some bad tendencies that I noticed that really made me hesitate.

The one positive thing I will say is when Nix knew he wasn't getting to the quarterback, he would try and get his hands in the passing lanes and be disruptive. That tells me he's a smart football player. He has the 1st step quickness like I showed above, but at his size it's easy to see how stamina is an issue, so the explosiveness isn't there all the time. Much like he clogs space in the run game, the same can be said as a pass rusher. When Nix is winded, he seems to just lean on his man with no particular motive. The bull rush isn't effective because he doesn't have his full strength, and there aren't any counter moves to combat when he loses initially.

To that I'm sure you say "well only play him on running downs" and in the NFL, every down has to be considered a passing down. Teams are throwing more and more on 2 downs, and running on 1. This is why taking Nix at 25 is a very risky move when he offers little to no pass rush.

In 2012, teams were forced to double team Nix and they just couldn't move him off of his spot. That wasn't the case in '13. Nix didn't win as much as you would hope for when he was blocked 1-on-1, when he was doubled, it got worse. Nix had a tendency to pop straight up, as if he were trying to locate the ball. Teams were able to move him easily down the field.

One thing I noticed with Nix is that when he was doubled, he would try to spin out of the double team. That's what would cause him to get washed out of the play so often. 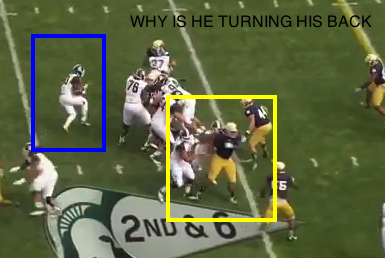 In the above picture nix was doubled, and as he spun out, that allowed the offensive line to drive him a few yards and out of position to have any impact on the play. This was a habit in 2013, and a bad one at that. Nix wasn't disruptive enough to be trying things like this.

Staying Off The Ground

The only thing worse than trying to spin out of double teams is being on the ground. Nix was on the ground more than Timmy Jernigan and Zach Kerr combined. It was at an alarming rate. This causes problems, because if you're on the ground, the offensive lineman can work to the next level and seal off a linebacker, especially if he was set to double team you. The problem is, most of the time this was just when Nix was being blocked 1-on-1.

I think you just expect Nix to be more powerful at the point of attack, and he's not.

Nix is plenty quick & nimble enough to stay off the ground. I'm not sure whether it's a pure strength issue, or that he just wears down way too easy, or both. In the next two GIFs, I can kind of understand Nix being on the ground, as he faced the best Center in the draft, Marcus Martin. But this shouldn't be happening against the Purdue's and Michigan's of the world.

This is the biggest issue when you have a player that is constantly on the ground.

When Nix plays high, he doesn't stand a chance. This is true of any lineman, the low man truly always wins. But for lineman who don't have counter moves, or don't disengage, it's a must to fire off low consistently. Of the top 3 nose tackles, Nix consistently played the highest. This seems to be a stamina issue. He's 331 pounds, so I can't fault him too much. I'm 184 and get tired walking from the car to work. But Nix does seem to tire faster than Jernigan or Kerr(who's only 5 pounds lighter at the combine), and teams were really able to take advantage of him when this happened.

Nix grades out to a 7.56, or a late 2nd round talent. It's hard to evaluate players without factoring in the name on the back of their jersey. If I didn't know how good he was in 2012, this grade would be much lower. In 8 games in 2013, there wasn't much to suggest he was more than a late 3rd round pick, at best. But you go back and see what he did in 2012 and he's a 1st rounder. The question is, how much of that was due to him coming in over weight or being bothered by the knee injury, which forced him to miss the final few games of the season.

I'm a firm believer that if you're on the field, you're healthy enough to play. You're hurting your team even more if you're out there and not at full strength.

How He'd Fit as a Charger

If Nix can work on playing lower, and cut out some of his bad tendencies that he showed in 2013, he has a chance to be a very good nose tackle. In 2012, he helped Manti Te'o quite a bit, but last years version of Nix isn't who the Chargers are drafting if they do decide to select the 331 pound tackle. Nix is best suited as close to the ball as possible. He doesn't quite have the range as Jernigan or Kerr, but has a very quick 1st step that could potentially be deadly. Ironically, he can get stronger at the point of attack, despite his size. If he can iron out these issues, he'll be a good one a the next level.

The question just becomes, do you want a one dimensional player who is coming off of an injury and an underwhelming season? I wouldn't. Nix strikes me as a "is who he is" player, where you hope he can get back to his 2012 form, but I'm not sure where he's shown he can get better at. I see a low ceiling, and that's not the type you take in the 1st round.