Continuing the versatile lineman, we take a look at USC's center Marcus Martin

Marcus Martin is one of the more intriguing prospects in the draft. The Junior played Center at USC for 1 year, before playing guard the previous 2 years. Martin has the size and versatility to play both positions at the next level. He didn't run at the combine, but here's how he stacks up size wise to the rest of the centers.

Before we get into where he excels, and where he needs to work on. Don't worry too much about that bench press number. Weight room strength≠ functional strength.

Martin is impressive in the sense that he can get to the 2nd level with ease, and has very good footwork in doing so. He's very good at combo blocker, which is needed to be effective in a zone blocking scheme.

He gets a great chip on Louis Nix, then creates a massive running lane by driving the linebacker out.

In the passing game, he's able to sit down in his stance and lock defenders out with his long arms. When he plays under control, you can see why he could be the 1st center taken in the draft. 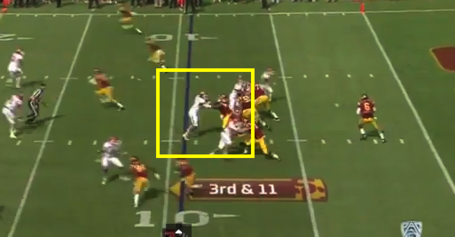 For the most part, Martin fires off low and has good hand placement. For a player whose only played the position for 1 year, he has all the talent to be something special. For how strong he looks, I believe there's even some untapped strength in his game. But there's also reasons where he needs to work at.

Where He Can Improve

As athletic as Martin is at getting to the second level, he has a hard time slowing down and hitting his target. You'd like to see more body control out of him. He has a tendency to either over run his target, or get "shook" by the linebacker.

The above GIF is the best example of this, the problem isn't getting to the 2nd level, but getting a hat on a hat. Too often when he gets there he wants to kill the defender instead of just executing the block.

You'll also see Martin lunge at times. This happens in the run, but more so in the passing game. Again, it's an over aggression issue, I believe.

The biggest issue is when the defensive line stunts up front. This is where Martin's inexperience comes into play. I think it's a combination of things for the reason he struggles. The 1st reason is his over aggression, where he just wants to finish his block, and that leads to the second reason. Which is where I think he rides his man for too long. The final reason is I don't think he gets enough depth to actually see what's going on in front of him. There are times when the rest of the line is at least a full yard behind him.

The good news with Martin is, all his issues are coach-able, and mostly due to inexperience.

Martin grades out to a 7.84, or an early 2nd rounder. I think he could go as early as the 2nd round, or as late as the middle of the 3rd round. Martin flashes the athletic ability, the strength, and aggressiveness you look for in a successful offensive lineman. Pair that with his proper footwork, and it's easy to see how he can be successful in the NFL. Whether it's a smooth transition and how long it takes will be the question. He'll need to show more awareness and play under control.

How He Fits in San Diego

Martin could come in and start Day 1 at guard while being the heir apparent to Nick Hardwick when he retires. I get the sense that Joe D'Alessandris could get him to play under control as the season goes on, and he profiles as a great fit in the zone blocking scheme the Chargers run. But he's also shown that he can fit man blocking schemes that San Diego mixes in as well. He has the strength to win at the point of attack, unlike Jeromey Clary. He'd be an instant upgrade in the run game, and while his pass protection might be rocky at first, by no means would he be a liability.