You're sick of it. I'm sick of it. "Finding the next Richard Sherman." Let's make 2 things clear here:

1. Big Corners are NOT taking over the NFL.

Bashaud Breeland, who many(including myself) thought would be labeled as a bigger corner, only measured out to 5'11 at the combine. It wasn't more than a month ago, when NFL Networks Daniel Jeremiah said he is a lock to go in the 2nd round. I knew who he was, but hadn't really watched him up close. Knowing the Chargers need at cornerback, I wanted to take a good look at Breeland to see how his skill set translated to the next level.

It sounds simple, but in the NFL, if you don't win at the line of scrimmage, you don't have a shot. You lose at the line, it snowballs to not being in a position to make a play, to giving up the catch. These are all things Breeland excels at. He's a boundary corner that is very patient at the line of scrimmage. He doesn't fall for initial fakes, and he also doesn't lunge. He does a good job of getting the initial jam, and continuing the jam as he's retreating.

What makes Breeland good, is he doesn't just have to be physical with you at the line. He mirrors exceptionally well, and does a good job of moving his feet and again, being patient.

Just like in the above GIF, Breeland can turn and run without losing speed. His times might not reflect it, but he is a fluid athlete.

The biggest takeaway I have when watching college corners isn't to see how many receptions they're giving up, but if they're in a position to make a play, then if they can finish. Breeland has shown the ability to do both. You're going to give up catches, that's natural. Breeland is a guy that has the length to be disruptive, so as long as he's around the ball, there's a good chance he can break the pass up, or finish the play altogether.

The following GIFs are good examples of what I'm talking about above. The 1st GIF it's 4th & 3, Breeland does a good job of playing the sticks and using his length to defend the pass.

It's the ball skills that might be Breeland's most impressive trait. He attacks the ball in the air, and is physical through the catch point, as you'll see in the 1st GIF below.

This next GIF is textbook.

Breeland is also a quick reactor to screens and run plays. He does a good job with his run fits, and though he doesn't have the greatest form when it comes to tackling, he puts himself in a position to make plays.

I do believe Breeland is comfortable in off coverage. I also believe he struggles to break on the ball. It's a combination of things, primarily his footwork. When the recevier goes to break on his route, Breeland's feet get too far outside of his frame, and that's what causes him to be late. The below picture is a good example of this.

He's at the bottom of the screen. He doesn't have the suddenness to sit on routes the way he does, it also seems he's a little stiff in the lower body. What happens is Breeland's feet get too wide, forcing him to over compensate, take extra steps, and be late breaking on the ball. Because his burst is just average, he can be late at times.

The last issue I have with Breeland is that he gets grabby late in the route. Some corners can get away with this because they're subtle about it, Breeland is the opposite. He grabs late in the route when he's about to get beat, and fully extends his arms. Against Florida State he almost pulled Rashad Greene's jersey off on a vertical route, he also got away with one against Kelvin Benjamin. In the picture below, it was an in breaking route, and Breeland was beat, and didn't hide his intent of holding at all. 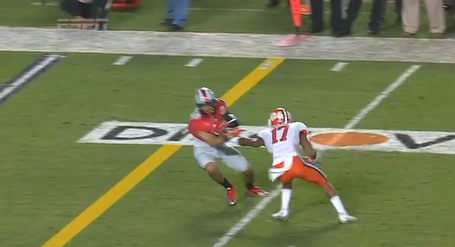 Breeland grades out to a 7.59, or a late 2nd round pick. The skill set is there. He has top notch ball skills, and his ability to win at the line of scrimmage will have coordinators drooling. Then you'll see him get grabby, and take extra steps out of his breaks. There's much to like about his game, and if he can clean those issues up, he should be a solid starter at the next level, despite his 4.62 40 time. That doesn't bother me as much as his change of direction numbers did. Breeland didn't have much trouble turning and running vertical with receivers.

How He Fits as a Charger

Breeland is comfortable in off coverage, but is better suited in a scheme where they press more often then not. His biggest asset his winning at the line of scrimmage, so in a off man Cover 3 defense, Breeland's fit isn't exactly ideal. If he's available in the 3rd round, he would make for good value, but because of his strengths, I'm not sure he'd be an ideal pick for San Diego before then.