Going over the 2nd receiver of the day, another ultra athletic player, in Odell Beckham Jr.

I'm going to go through every trait a wide receiver needs to be successful at the next level, and tell you why Odell Beckham Jr. is better than you think, and why he's a perfect fit for San Diego at 25.

The absolute most important trait for a receiver. Can you get off press coverage with no wasted movements? Can you make every route look the same? Whether it's a 10 yard out route, a 3 step slant, or a deep post. The best receviers sell every route as if it's the same, and don't take 3-4 extra steps to get of their break. That's the difference between creating separation at the next level, crisp routes with no wasted movement.

Here is an example of Beckham working out in the slot.

He does a good job of pressing the corner, and getting in and out of his break. Nothing flashy, but very effective.

This next route Beckham is matched up on the outside and runs a comeback. When you run a comeback, you want to sell the vertical route, and as soon as you get the corner to "bail(turn and run)", that's when you chop your feet and come back to the ball.

Again, nothing flashy, but an all-around good play by Beckham.

I can hear you now saying "that was against Kent State, let's see him do it against better competition." Fair enough, how about arguably the best cornerback in the country, Jason Verrett?

I mentioned you have to be able to beat press coverage at the next level if you want to be successful. Well, Beckham could've had a touchdown if his QB Zach Mettenberger threw him the ball early in the 1st quarter. Watch this vine, Beckham hits Verrett with an inside-outside jab step and leaves Verrett grabbing air. But no throw, so there's no stats. Same route as above, a comeback, against Verrett. This is the separation Beckham created. 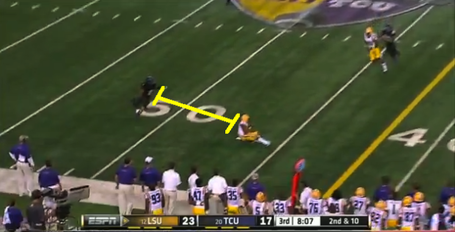 Same result, and Verrett is actually closer now that the ball has been caught. Beckham does a great job of utilizing his speed to create separation. This can be a problem with faster receivers, as they rely too much on their athleticism and not enough on their technique.

Route running is also recognizing coverages. Knowing the difference between man and zone. In zone, you have to find the holes in the defense, know when to sit down. This next one is a good example of Beckham understanding zone coverages.

This is all a strength of Beckhams. He doesn't have the smallest hands. 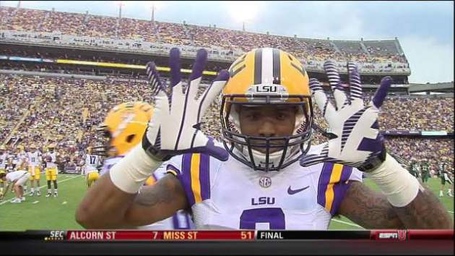 Below, against Verrett, Beckham does a great job of extending for the ball, catching it away from his body and at the highest point, and controlling it to the ground.

That was textbook by Beckham.

This next one against Florida shows off his body control and ability to adjust to passes behind him.

Against Mississippi State this year, Beckham put on a clinic on how to catch the ball in traffic and how to high point the ball. It was really fun to watch. I could GIF you to death, but you'd be here all day.

5'11 receivers aren't supposed to make the catches he does. They're usually nowhere near as good at adjusting to the ball in the air as Beckham is, either. That's why I think he's a special player and is being sold short of how good he really is. He's also prone to make the highlight catch.

Beckham grades out to an 8.24. I'm probably the highest on him, but I think he can have a really good NFL career. There's not a situation I can imagine where Beckham fails. You can't say that about most receivers in the draft. He has the versatility to fit in any offense, his play making ability is absurd. He's a threat to score any time he touches the ball.

How He Fits as A Charger

Telesco said he wanted to add more speed, well Beckham ran a 4.31 unofficial 40 yard dash. Maybe even more impressive is his 20 yard short shuttle of 3.94, which shows incredible quickness and that Beckham is far from just a straight line speed type of player.. Match that with a 38.5 inch vertical and you have a true deep threat that the Chargers are looking for. Beckham could come in, and give the offense a much needed speed dimension. Even at 5'11, he fits the "jump ball Rivers receiver profile." Beckham isn't afraid to go over the middle and he can win early in his routes, so all around he would be the ideal fit in this offense and well worth the selection at 25.