Breaking down another Edge Rusher who can help the Chargers, with the assist from Sean Meusch

Perhaps due to the dip in Boise State's win/loss record the past couple seasons, Demarcus Lawrence has become one of the forgotten prospects of this class. One who definitely looks to be playing on Sunday's and doing so for a long time.

Lawrence's snap anticipation is really first rate. He's quite often right on the snap count. As you can see at the top of the screen in the picture below. 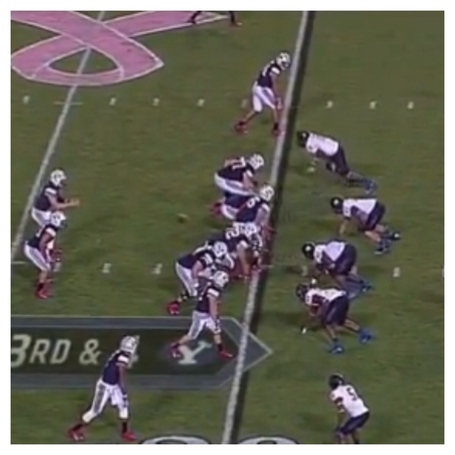 Lawrence shows nice explosion and a willingness to engage blockers that are lined up over him. Instead of the bad Habit you see some college defenders have of trying to run around blockers.

Lawrence gets a good, low release, getting all of his weight forward and showing excellent ability to convert speed to power. This enables him to gain the early leverage advantage on his opponent, using momentum and his plus balance and body control to get blockers on their heels & either drive them back or get them to commit. That way he can use one of his counter moves.

being a bit undersized, Lawrence shows a definite room to grow and even improve in this area as he builds functional strength and filling out his frame. He's shown the ability to effectively attack from both sides, whether covered or uncovered, & does a really nice job selling fakes and setting up his pass rush moves. His most effective move is his inside arm over nice that has often left him with a clear path to the Quarterback.

As far as using his hands, Lawrence is crisp and technical. He strikes the chest plate to jolt the blocker back, using active hands to bat down the opposing hands trying to get a hold of him. He has very powerful hands. Many of his splash plays are of Lawrence stacking & shedding and beating a block to make a play. Not simply coming unblocked off the edge. Lawrence should make a smooth transition to the NFL because of his ability to use his hands and shed blocks. An area where most struggle at the college level.

Perhaps Lawrence's greatest selling point is his consistent ability to defend the run, in spite of his less than ideal size. Much of this is due to a terrific ability of reading aye and reacting quickly. You couple that with his discipline to stay with his assignment and not over pursue, and you have a good run defender. It's rare for collegiate rushers to do this, as they want to make the highlight play. Lawrence is an unselfish player who shows great second effort to keep pressing even when he's overpowered by offensive lineman.

What Could Hold him back at the next Level

Lawrence has shown to be at his best with his hand in the dirt, where he starts low, and stays low, so he can win with leverage. There's no telling how he'll perform when he's asked to play from a 2 point stance. We don't know if he will be able to generate the same power or show the same explosive first step. He did put on weight and showed up at the combine 251, which is great size for a 3-4 OLB, but can maintain that? The NFL is a different beast, and though he's known for playing larger than he actually is, these are some things to keep an eye on. The fear is until he bulks up, he'll be a pass rush specialist simply because once his frame is exposed, lineman will have their way with him.
2 other minor issues with Lawrence is his lack of tape in coverage. We know he's a big, rangy athlete, but if he's asked to drop in coverage it's pure conjecture to say if he will be any good or not. The good thing is coverage for your OLB by in large isn't a big issue. Other than that Lawrence's discipline can sometimes be an impetus to his ability to make plays. More specifically, he has a tendency to remain so faithful to his assignment and keeping contain that he skeet be wan away from it when the play breaks down. This is another area that is coach-able.
How He Fits With the Chargers
Lawrence is a natural pass rusher that can step in and be the teams Jack OLB right away. On passing downs they would no longer have to play Jarett Johnson and would be able to deploy Melvin Ingram from different spots. They would have speed and athleticism all along the defensive front. Any size issue wouldn't be much of a worry because he would be primarily on the weak-side. Telesco has mentioned he wants to add speed & athleticism at the position, and Lawrence certainly fits that bill.
Because he only ran a 4.81 at the combine, I wouldn't expect him to go on the top 50 picks. Pass rusher is a premium position, so he might not be there at the Chargers 3rd round pick. I Currently have an early 3rd round grade on him, so it'll be interesting to see where he lands. With a more refined role at the next level, expect Lawrence to be a better pro, where he will be "freed" and allow to concentrate on rushing the passer.